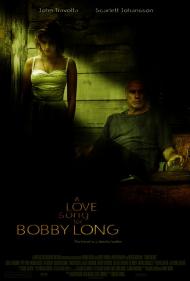 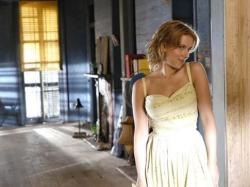 Scarlett Johansson in A Love Song for Bobby Long.

Although it's based upon a novel, A Love Song for Bobby Long, with a central cast of just three characters and a setting that rarely strays from one house, feels more as though it originated from a stage play. It also contains more literary allusions than your average movie, but uses them sparingly and in an unpretentious manner that furthers the story.

Scarlett Johansson stars as Pursy, a teenager who returns to New Orleans following the death of her estranged mother to discover that apparently her mother left her house in equal parts to Pursy and two men; strangers who are living in the house when Pursy arrives.

The men are Bobby Long (Travolta), a former English professor, and his protégé, Lawson Pines (Macht), a wannabe novelist who's working on a book based on Bobby Long's life. The three occupants soon clash as the two men spend most of their time drinking and smoking and not much else. As the movie progresses and the three learn about each other, they become closer and the ending reveals why Pursy's mother made these arrangements before she died.

A movie with this much talking requires actors with skill and each of the three do a good job with their role. Johansson in particular does an excellent job as the character that grows the most over the course of the film. Travolta who at times seems more like a joke than an actor based upon some of his film choices, reminds us that he can actually still act when he puts the effort into it. And the much lesser known Macht turns in the most understated performance of the three and more than matches up to them. Although she's never shown, Pursy's mother's presence is felt throughout the movie to such a degree that she does almost qualify as a fourth occupant of the house.

This is a movie where the action happens in the dialogue, emotional outbursts, and secrets revealed. The dialogue crackles and each of the actors creates the right pitch for their character, but some of the secrets, particularly the final one, aren't so very surprising. And it takes a little too long to get to that ending. Clocking in at two hours, the movie moves as slow as a Southern drawl at times. Watching Travolta play the guitar while singing isn't necessary once, let alone multiple times.

Even with its overly long running time, A Love Song for Bobby Long is an entertaining human drama that features some great acting from all three of its leads. 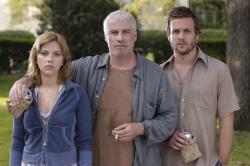 A Love Song for Bobby Long is far more literate than your average American movie. The dialogue is great. Bobby and Lawson play a game where they quote a writer and the other person must name them. You don't see many movies where the main characters quote such a diverse selection of authors as Dylan Thomas, Benjamin Franklin, T.S. Eliot, George Sand, and Molière. An old dog-eared paperback copy of the Carson McCullers novel The Heart is a Lonely Hunter gets featured prominently in several scenes.

Although it is essentially a drama there is plenty of humor to be found. When Bobby and Lawson escort Pursy to her new school they begin arguing over which of them is Plato and which is Socrates. Pursy interrupts with, “I wish you'd all just shut up. Cause if it's gonna be like this, I ain't learning nothing.” Bobby responds, “Girl, your English is fucking atrocious!”

Pursy may be less educated than Bobby or Lawson but she brings a stability to the house in New Orleans that it previously lacked. She gets a job and cooks and cleans for her two always inebriated housemates. She also brings some realism to a house of dreamers. At one point she snaps at Bobby in frustration, “Everyone knows that books are better than life! That's why they're books!”

As we get to know these three, we likewise learn about the deceased Lorraine. As Scott wrote, she may never be shown in the flesh but her spirit hovers over the entire story like a guardian angel. Travolta gets the showiest role and he seems to relish delivering his lines in a sleepy southern drawl. Johansson is fine as Pursy although she is a little too movie star perfect for the character she is playing. I never bought the relationship between her and her scumbag boyfriend. Gabriel Macht has the more difficult role as the protégé. Lawson isn't as colorful or quirky as Bobby, but (echoing Scott) I agree that Macht easily holds his own with his more famous costars.

A Love Song for Bobby Long isn't a bad way to spend a couple of hours. It features interesting characters harboring secrets (although the big one is obvious), and in addition to that it has a great soundtrack and gorgeous cinematography. 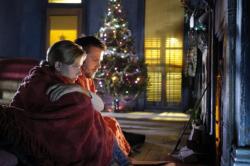 John Travolta as the titular Bobby Long is a crude, lazy drunk yet also quite charismatic. Long is honest, blunt and sometimes poetic. Travolta is humorous in the role of the arrogant retired professor but his accent is horrendously inconsistent.

Four years after this film, Scarlett Johansson and Gabriel Macht would co-star in The Spirit (2008) in which Scarlett Johansson was in va-va-voom mode, while Gabriel Macht was playing the dashing superhero. In A Love Song for Bobby Long, Johansson and Macht portray very down to earth folk. Although Johansson cannot hide her feminine attributes, she plays Pursy as common as they come with very little makeup and a mostly bland wardrobe. You may argue that Macht is still handsome here, in a disheveled sort of way, but he is a far cry from the clean shaven, debonair "Suit" on the popular USA Network television show.

Echoing Patrick’s echo of Scott’s opinion, Macht is a revelation. He plays Lawson as a man who has plenty of potential but is stuck in a life that seems to be going nowhere. He has the looks and education of a successful man but seems to be pissing it away in a rundown house with a man even more pitiful than himself. He has some great moments, such as when he cries to Travolta, “I am so…I am sorry alright. I am so fucking sorry.” which leads to the dramatic conversation he has with Johansson in front of the fire.

Lawson and Long have a very intimate relationship. Their platonic love is like a cancer that is destroying them both. They brought each other down to the lowly level Pursy finds them in. She ends up being a positive influence, talking Lawson into going sober, while in return Lawson and Long encourage Pursy to continue her education. The three need each other like gonorrhea needs penicillin.

A Love Song for Bobby Long is a great character study but it is also bit too long and way too maudlin. We know what needs to happen to these people and we have to wait longer than necessary for it to occur. The secrets come out and the payoff is not a surprise. It all comes together by the end but the journey took a bit longer than it needed to.