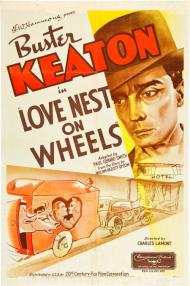 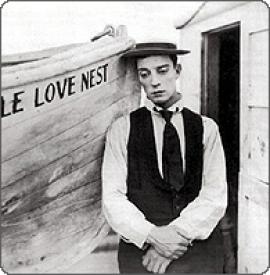 Buster Keaton in The Love Nest.

Feeling depressed after breaking up with his girl friend, Keaton takes to the sea to forget his troubles. After weeks at sea he gets picked up by a whaling ship with a cruel captain. The captain throws anyone overboard whom falls on his bad side. He keeps a list of names on the wall and crosses people of it after he has thrown them into the sea to die. He is not completely cold, he does toss a wreath in after the guy. He keeps a pile of them on deck. Keaton becomes his steward and spends a great amount of time trying to avoid being his next victim.

This was Keaton's last silent short film. It is typical Keaton. He made several movies that took place on boats, see Steamboat Bill, Jr, The Boat and The Navigator for example. It also uses the dream as plot twist that he used in Convict 13.

Keaton was not noted as a great story teller. He was known as the "great stone face". He never expressed much emotion as things happened to him. Whether it was a surly captain or a broken heart, Keaton remained emotionally steady. Where he excelled was in the antics and pacing of how often he could throw a gimmick at the audience.

The Love Nest does not have much of a plot and if you have seen some of Keaton's work before, you will find nothing unique here. This one is for Keaton fans only who just want to see all of his work. 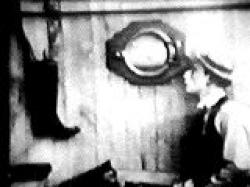 Is that a porthole or a picture?

Keaton may have been the Great Stone Face but he was still capable of expressing emotion. Watch how he uses his tears to seal the envelope in which he sends his farewell letter to his fiancée before setting off to sail around the world on his titular boat.

The drawn-on beard he sports after several weeks at sea is amusing. An understated title card reads, “The captain is rather irritable.” There are a few clever sight gags like when Buster sits looking forlornly out of a porthole which turns out to be a picture hanging on the ship’s wall. And when a whale is spotted off the port bow Buster, in his confusion, brings the captain a bottle of port.

Like Eric said this was Keaton’s final silent short movie. He would, however, return to the two-reeler format in the 1930s after his career had fallen on hard times. He would remake many of his silent shorts, unsuccessfully, as talkies.

I agree that The Love Nest is far from his best work. The dream angle had been used by Keaton numerous other times, besides Convict 13 he used it in The Frozen North and would return to it again in Sherlock Jr. 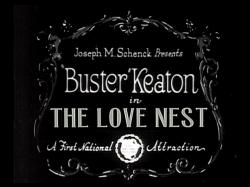 Eric, I think you're a little harsh on this short. It may not be Keaton's greatest work, but it still packs plenty of laughs. Taken the note that Keaton writes at the very beginning to the woman who broke his heart.  "Since you've broken off our engagement, I've decided not to marry you," it says.

On board the ship has some good gags as well. I thought the list of crew members drowned and the wreaths the Captain throws in the ocean after them was a nice touch. The porthole really turning out to be a picture that you mentioned Patrick is also a good bit. And when the Captain cries, "All hands on deck" how Keaton dutifully drops to his knees and places his hands on the deck. And in a crisis the Captain tells Keaton, "You know what to do" and Buster goes and fetches the whiskey bottle as you also mentioned Patrick.

I also agree with you Patrick that Keaton could act. He just didn't smile. Watch how he rolls his eyes behind the captain's back or how nervous he gets when he accidently points the guns at the Captain. He was subtle, but he was an actor.

The ending is a bit of a disappointment. It should have just ended with him being blown to heaven but instead he goes back to his stand-by of having it all turn out to have been a dream. And the final sight gag isn't as funny as it should be.

Not his best work, but like every Keaton short I've seen, there's still lots to enjoy.