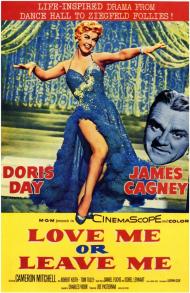 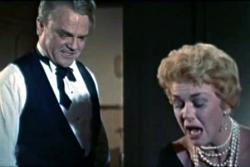 Love Me or Leave Me is a movie that I remember watching late at night on television with my dad back in the 1970’s. Up until now I had only seen it cropped for the small screen and in black & white. This movie should only be seen in its original Technicolor, Cinemascope glory.

Doris Day plays legendary jazz-age chanteuse Ruth Etting in this musical biopic. James Cagney plays Marty “The Gimp” Snyder, so called because of a bum leg. He’s a Chicago hood who discovers Etting working as a dime-a-dance hostess at a tawdry dance hall back in the roaring twenties. At first he just wants to get her in the sack, but quickly falls in love when he realizes that a) she is no easy lay and b) she is one hell of a singer.

Doris Day gets to wear many fabulous gowns and sing some great songs including “Shaking The Blues Away”, “Mean To Me”, “It All Depends On You”, “Ten Cents A Dance” and “You Made Me Love You”. The soundtrack album hit # one on the Billboard charts and stayed there an impressive 17 weeks. I’m not familiar with the real Ruth Etting’s voice but Day sells the songs with style and performs the dance numbers with plenty of gusto.

The script is not so great. It consists of a series of arguments between the two main characters in a parade of backstage dressing rooms as Etting’s career climbs from Chicago nightclubs, to radio, to The Ziegfeld Follies, to Hollywood. He loved controlling her and she used him to get ahead. Who can you root for in that scenario?

Cagney received his third and final Academy Award nomination for this role. Looking at it now it is really just a parody of the tough guy parts he was most known for. He yells a lot, tosses threats around like a Frisbee and remembers to limp in all his scenes. In contrast Doris Day, who wasn’t nominated, gives a fine dramatic performance.

Love Me or Leave Me is lushly shot with gorgeous colors. It certainly looks like an MGM musical from the 1950’s. It also contains some decent musical numbers and an understated performance from Doris Day to go with a ham-fisted turn from James Cagney. File this one under movies from childhood that fail to live up to the memory of them.