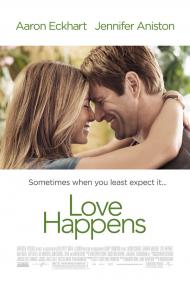 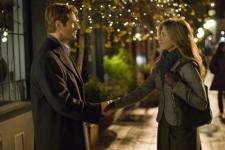 A movie as romantic as a handshake.

A better title for this movie would have been Death Happens, because while the marketing department would like for you to believe that this is a romantic comedy, there's only a little romance and a little less comedy. What it's really about is a self-help author trying to deal with the death of his wife and the success that her death has brought him via his writing and motivational speaking. This deception would have been less annoying if it had been a well-written movie about someone dealing with death, but it's not and clearly that's why the sleight-of-hand was used by the marketing department.

Aaron Eckhart stars as Burke; the author, who travels to Seattle for a seminar with a group of grieving people. His manager has also set the seminar up as an audition for bigger and better things. If the seminar goes well he could end up on television and with endorsement deals.

Burke's success is based on his book on how to deal with the death of a loved one. It was inspired by the death of his wife in a car accident. If you've seen the previews to this movie you'll already know one of its only plot twists as for some reason they chose to reveal the twist there. In case you haven't seen the previews, I won't give it away, but suffice to say not everything Burke has built his reputation on is based upon fact.

Jennifer Aniston plays Eloise, a Seattle Floral Shop owner whom you're supposed to think is the female half of this romantic comedy, but her part is quite small compared to Eckhart's. Her part is very generic and could have been played by just about anyone. Eckhart and Aniston share zero chemistry and to be honest, they seem fairly bored, which doesn't do much to entertain the audience. There's some very poor editing where her character goes from yelling at his character in one scene; accusing him of being married and hitting on her, to going out on a date with him in the next.

Far too much time is spent on Drew Carey's brother who is mourning the death of his son. He's able to move on from the mourning process by shopping at Home Depot via the magic of product placement, in one of the movie's many bad scenes.

The very worst scene is the big "emotional" moment at the end of the movie where Martin Sheen and Aaron Eckhart reconcile together on stage before the audience goes into a slow clap. It's supposed to make you sad and happy, but is more likely to make you nauseous.

I suppose it's understandable that the marketing department would try to lie about this movie. Considering how bad and dull the truth of it is and how unlikely it is to do well past its opening weekend, I guess they had to do something to try to make their money back.