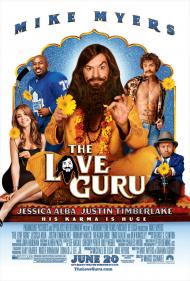 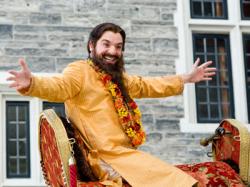 I might not be Mike Myers number one fan, but I've got to be at least in the top 100. I loved the Wayne's World movies, the Austin Powers movies are comedy gold to me and I even loved the much under-rated and poorly named, So I Married an Axe-Murderer. Therefore you have to know that if I didn't like The Love Guru, Myers has to be doing something seriously wrong.

Myers plays the Guru Pitka, a Deepak Chopra type character who writes book and conducts seminars on self-improvement. He's hired by the Toronto Maple Leafs' owner (Alba) to help her star player reconcile with his wife in time for him to help her team win the Stanley Cup. Justin Timberlake plays an opposing Hockey Player with a large penis. I only mention that because the movie mentions it approximately 2,006 times with each reference being less funny than the last. Myers regular Verne Troyer plays the Maple Leafs coach and elicits a few titters with his slapstick antics. Alba's character inexplicably falls in love with Guru Pitka also, but he's unable to return her affections since he's taken a vow to love no one else until he learns to love himself.

Here's the problem with this movie. 99% of the jokes involve some kind of bodily fluid or potty humor. Now I'm no prude. The Austin Powers movies had more than their fair share of potty humor, but somehow they still managed to be funny. Here the jokes are just disgusting at worst and groan inducing at best. The humor seems squarely aimed at 8 year-old boys and yet the movie contains numerous references that would go right over an 8 year-old's head. How many 8 year-old's are familiar with Mariska Hargitay or the 1970's television show Electric Company? I guess the real audience is 40 year-old men with the mind of an 8 year-old. 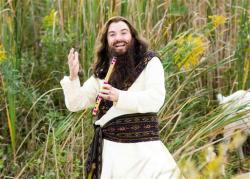 Mike Meyers and Adam Sandler are competing for the most juvenile comedy of the year. You Don’t Mess With the Zohan and The Love Guru are both ridiculous vanity pieces that allow it’s lead to act like a thirteen year old. Perhaps someone should explain to these guys that PG13 stands for the lowest age that should be allowed to see the movie, and not the movies target audience.

Pitka is a Guru. Which is just an exotic way of saying a know-it-all, self help motivator. He gives lectures and writes books. Throughout the movie, Pitka holds up a copy of one of his books, for no other reason than to attempt to illicit a laugh from the book’s title, “If Your Happy and You Know it, Think Again.” Is my favorite.

Pitka is eager to get on Oprah, (America’s most famous Guru). He gets hired to save the marriage of a Toronto Maple Leafs hockey star, Roanoke. This would allow him to be famous enough to be given an audience with the know-it-all high priestess. Roanoke’s wife has taken up with another Hockey player noted for his large, well, um... His nickname is La Cock and his last name is Grande.

Meyers has always had an annoying habit when it comes to his jokes. He beats them into the ground, digs them back up again and continues to beat them until we the audience are no longer sure if it was ever meant to be a joke in the first place.

Running jokes are big with Meyer’s. Pitka greets everyone with the phrase, “Mariskahargitay.” It is mildly amusing the first time you hear it. The second time he says it you already wish he never did. By the twelve time he says it you wonder if Meyers was even awake during the dailies. When the real Mariska Hargitay shows up for her cameo, I was more inclined to groan than laugh.

Like in Zohan, The Love Guru never strays far from male genitalia. Nearly every time Grande is on screen, someone is either looking at his crotch or referring to it’s size. Another scene has Pitka’s assistant cooking nuts in dough. Of course they resemble testicles and Pitka over reacts as they are being made. To top that joke off, the nuts in a blanket are garnished with a pickle. Even Colbert, as a drug addled announcer, draws a diagram around a picture of a goalie to show where goals are made. Guess what he ends up drawing between the goalie’s legs?

Now that I think about it, maybe a 13 year old is too mature for The Love Guru. The best joke comes from Troyer after the final credits, thankfully, start to roll.