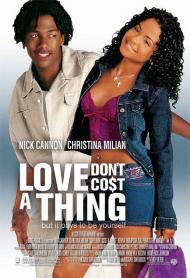 Touted as an updated urban version of the 1987 teen romance Can't Buy Me Love, Love Don't Cost A Thing stars two of the hottest rising young stars in the entertainment industry. Nick Cannon starred in last years hit movie Drumline and has already had a successful stand-up career, as well as starring in his own television show on Nickelodeon titled 'The Nick Cannon Show' and if that isn't enough he also has musical aspirations and will soon release his first CD. Christina Milian has been performing since she was a small child. She has appeared on many television shows, and currently hosts MTV's 'Becoming Presents: Wannabes'. She is also a singer/songwriter having written hit songs for Ja Rule and Jennifer Lopez and having just released her debut CD.

Nick is Alvin Johnson, an academically brilliant student who hangs out with his geek friends and spends his time working on a special automobile engine that he hopes will win him a scholarship to college. To earn the money for parts he works as a pool cleaner.

Christina is Paris Morgan the most popular and beautiful girl in school. When Paris gets in an accident in her mother's Cadillac Escalade Alvin assures her he will pay for and fix the damage on the condition that she will pretend to be his girl for two weeks. Before you can say 'peer pressure' Alvin has turned his back on his old friends and has become one of the elite kids. He starts dressing in designer clothes and stops working on his engine.

Of course this is a teen romance so the ending is never in doubt. Paris, it turns out, is really a sensitive young woman who has been playing a role all her life. She soon falls for the old Alvin. Meanwhile he is busy enjoying his new status as a 'playa'. Will the genuine Alvin resurface in time for him to get together with Paris? Now what do you think?

Steve Harvey has some of the funniest moments as Alvin's father. He encourages his son to become a ladies man and is at first completely delighted by the transformation in his son.

Nick Cannon has the charisma and talent to become a big star. It will be interesting to see if he can make the difficult on-screen transition from teenager to grown-up.

Love Don't Cost A Thing uses a tried and true formula but does it in a fresh and up to date manner. It is sure to please its target audience. One thing it demonstrates quite aptly is that though styles, music and slang may change, the right of passage for teenagers remains the same.