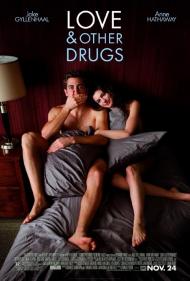 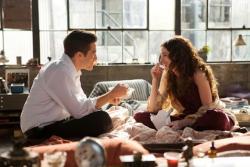 Love and Other Drugs is an okay movie, but it suffers from something of a split personality disorder.  The strong performances by its two likable leads help cover some of its problems and keep you interested, at least in their relationship, but even they're not quite enough to help it all gel together.

The movie starts as the story of Jamie (Gyllenhaal), a charming, but shallow electronics salesman who decides to try his luck as a pharmaceutical rep.  His womanizing and attempts to sell drugs to doctors with his partner, played by Oliver Platt, is mainly played as a comedy.  In particular, the character of his brother (who comes across as Jack Black's less talented second cousin) seems to have been imported from a Judd Apatow comedy.

When Jamie bribes a doctor, played by Hank Azaria, to allow him to follow him around on his rounds, he meets Maggie (Hathaway).  As the doctor examines her, we learn that she has early onset Parkinson's disease and also see her breast.  When Maggie learns who Jamie really is, instead of suing him and the doctor, she ends up going on a date with him where they quickly end up having sex.  It's supposed to be a way for them to meet cutely, but it's not very realistic.

After Jamie and Maggie start dating and having lots sex, featuring more than your average amount of nudity in a typical Hollywood romance, the movie shifts gears and becomes less a frat boy comedy and more of a romantic comedy, only the remnants of that portion of the movie keep hanging around, mainly in the form of Jamie's brother.  I mean, by the time you get to the scene at the Parkinson's medical convention and Jamie realizes the full impact of Maggie's disease, it doesn't seem possible that it's a scene from the same movie where Jamie's brother is caught masturbating to a tape of Jamie and Maggie having sex.  It's like combining Love Story and American Pie in the same movie.

Another side effect of combining too many subplots is that the movie runs long at almost two hours.  It didn't need to focus on the love story and Jamie's job.  Halfway through the film Jamie begins selling Viagra, as the movie is set in the mid 1990s when Viagra was first released.  That subplot could have been a movie unto itself, as the love story could have been, but by combining them you end up short changing them both.

Hathaway, who is the co-star to Gyllenhaal's star, is really the brightest thing in the film.  She lights up the screen when she appears and evokes the most real emotion.  Her character is the most interesting of the two. Gyllenhaal is an okay actor and he looks good, but he's not in her league.  He fits the suit and he looks good naked, but he shows very little range.  What emotion you do feel regarding the couple comes almost entirely from Hathaway, who also looks good naked, but doesn't come across as someone as who spends hours and hours in the gym each day (and I mean that as a compliment).  In other words, she looks and acts like a human being and not the cartoon that some of the characters are.

After watching this movie I was left with the feeling that somewhere within it was a good one, but it needed a much tighter editing job to bring it out. 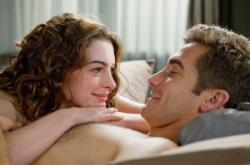 Anne Hathaway and Jake Gyllenhaal in Love and Other Drugs.

Jake Gyllenhaal as Jamie Randall, is a good looking guy from a wealthy family, with more charm than can be believed.  I had zero sympathy or interest in anything he had to do or say.  Even though he occasionally has some problems on the job, he stills seems to walk through life without a care. After all, he has his wealthy parents and rich brother as a safety net. Even if he loses his job he will never fall on hard times.

He gets a job selling pharmaceuticals.  It is a business that feeds on insecurities with some supposed miracle cures, that often have side effects that out weigh the cure.  In some ways, Jamie is no different than a Huckster in the old west selling snake oil.  Ritalin, so much easier than parenting.  Prozac, so you can excuse your bad mood.

Later, he tells Maggie he has some Daddy issues.  Considering he says it while laying naked in bed with Hathaway, I again felt no concern for him.   I did not pity him when he could not get it up.  Viagra, so you don't have to wait for the right moment.  Although I did like Hathaway's speech afterwards, "All men care about is performance, but they have an appendage that doesn't work if they worry about performance."

Only when he starts to develop actual feelings for Maggie does he become at all vulnerable, and a character worth investing in.  Although their relationship starts purely physical, it easily develops into more.  When he meets her at the bus from Canada, they realize they are in a committed relationship without ever saying it.    It is such a big deal for him to say that he loves her that he nearly has a heart attack.

It is needed comic relief.  The last part of the movie becomes a drama as Jamie becomes desperate to find a cure for Maggie.  She in turn sees where it is all headed and decides to break up to avoid the inevitable.   This is the part of the film that should have been cut.  The pajama party scene is titillating and humorous but it takes away from the love story.  They should have cut from the break up to the packing scene.

Scott, you thought the time spent on the job should have been cut, and you are right.  The story is trying to make a point about how Viagra is celebrated as a miracle but it does not save lives.  Maggie does not have a cure for her Parkinsons and even has to go with other patients to Canada to get meds.  The social/political message should have been left on the cutting room floor.

The scene near the end when they get back together is highly romanticized but moving none-the-less.  Jamie admits his flaws and confesses to Maggie just how much she brings to his life, and how much he needs her.  Maggie cries to Jamie, "I am going to need you more than you need me."  She continues, "I have places to go."  Jamie smiles and responds, "You'll go there.  I just may have to carry you."   I did not like Jamie at the start of this film but he became a man of honor and conviction by the end.

Yeah Love and Other Drugs is a bit schizophrenic. It is part romantic comedy (only with lots of nudity and sex) part workplace/frat boy situation comedy and finally a bit of a tragic-young-woman-with-an-incurable-disease drama. All of the individual parts work to some extent but when combined they don’t quite fit. I agree with Scott that the two leads are both extremely likable. They give it their all and in the process nearly manage to pull it all together.

I prefer both Gyllenhaal and Hathaway as serious actors more than comic ones. I therefore enjoyed the dramatic aspects of the story most. Agreeing with my brothers, the scenes on the job should have been trimmed, which is ironic considering the movie was based on a book written by a former Pfizer sales rep that doesn’t even include a love interest for the main character.

The love story angle is very nicely handled. This could have been a classic romantic drama. Their falling in love makes so much sense and unfolds rather beautifully. It is Jamie that falls in love first, while Maggie (having a better grasp of what lies in store for her with her disease) is the more hesitant to give her heart away. By small increments she allows Jamie into her life.

Then comes the pivotal scene in Chicago. Maggie is empowered by the Parkinsons’ support group and has a breakthrough moment. She is now ready to take the chance of getting her heart broken by committing wholeheartedly to their relationship. Of course Jamie, at the same time, has an epiphany of his own, courtesy of one of the husbands of a woman with advanced Parkinsons. For the first time he truly considers just what lies ahead.

This makes the ending much more poignant and romantic. If Jamie had stayed with her from the beginning they would not have made it as a couple. He had to lose her in order to realize just how much he loved and needed her. Yes the ending is highly romanticized but since this is a love story it needed to be. Scott is right that Hathaway is the more talented actor of the two leads but it is the character Jamie that has the bigger arc. As Eric wrote he grows from a selfish man/child into a grownup man of honor. It’s just too bad the movie goes through so many personality changes first.