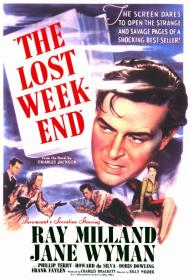 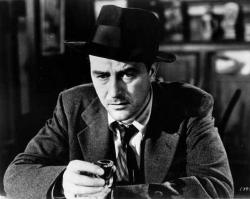 Billy Wilder's movie about a weekend spent watching a hopeless alcoholic hit rock bottom still packs a wallop nearly sixty years after its release. From the novel by Charles R. Jackson The Lost Weekend is an unflinching glimpse at one man's battle with his inner demons. Ray Milland deservedly won the Oscar for his role as aspiring writer and full-time lush Don Birnam, giving one of cinemas most memorable and definitive performances.

When the movie opens Don is supposed to be packing for a weekend of relaxation in the country with his brother. Instead he winds up on a four-day bender that ultimately brings him face to face with his own mortality.

His descent is vividly chronicled. He starts off doing shots of rye at a neighborhood bar on Third Avenue in Manhattan (interiors were shot at the famous P.J. Clarks restaurant that still stands today). It is here that Ray Milland (in a tour de force acting moment) gives the best explanation for alcoholism that I have ever heard. You see his dream is to be a writer, but every time he starts to write a nagging voice in the back of his mind tells him that he's no good. The only way to silence this voice is with a drink. After a few shots of rye he can see the entire emotional sweep of his novel perfectly imagined in his mind's eye. Only the next morning, when he wakes up sober, the idea is gone. So he starts the vicious cycle all over again. and again. and again. He's on the merry-go-round all right and he doesn't have a clue how to make it stop or the guts to jump off.

But he does have Helen St. James (Jane Wyman). She's a young lady from a nice family and she loves Don Birnam with all her heart. In a flashback scene we see how they meet and fall in love. By the time she realizes just how deeply lost in the bottle he is, she has already lost her heart.

So the weekend rolls on and Don runs out of cash. In one famous sequence he goes to pawn his typewriter and ends up walking all the way up Third Avenue to Harlem in a vain attempt to find one open for business. Finally someone tells him that it is Yom Kippur the Jewish High Holy Day and none of the pawnshops are open.

From here his descent quickens. He is, in fact, free falling. He winds up in the hospital surrounded by hallucinating drunks. He manages to get out only to suffer the DT's later in his apartment. In the movie's most famous shot his delusions take the form of a bat that flies across the room and attacks a mouse in a crack in the wall. A single drop of blood seeps down towards the floor.

So seriously does Billy Wilder handle this theme that I wasn't sure how the movie was going to end until the final scene. 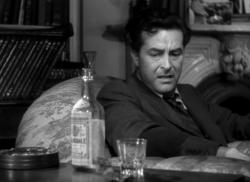 Billy Wilder does handle this theme seriously; too seriously at times. Although he is probably my favorite old time director, he is too prone to melodramatics as evidenced here. He's not helped by the soundtrack which blasts out heavy chords every time something happens. If you can get past this, the movie does still have things to offer.

I do have to disagree with Patrick about Don's excuse for drinking. It's actually a pretty cheesy one. Don says that when he's been drinking that he can see his whole novel in front of him, but when he's sober it disappears. Just think how funny things seem when you're drunk. That doesn't mean they really are funny, they just seem that way because you are drunk. Besides, the best excuse for drinking in a movie is from Arthur, and funnily enough it fits the character of Don in this movie as well. "Not all of us drink because we're poets," Arthur says. "Some of us drink because we're not."

That aside, Patrick is spot on when he praises Ray Milland's performance, which is superb. Although the drama is overwrought, his performance never is. The way he curls his fingers beckoningly and slurs his "C'mere" is classic.

Although it is hard to see how this movie will end, when it did end, I was disappointed. Since Patrick didn't give the outcome away, I won't either, except to say that it doesn't fit with all that happens before it and I didn't buy it for a second.

Too much melodrama to be Wilder's best, but worth a look anyway. 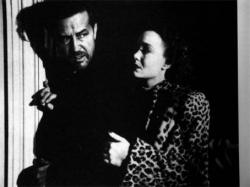 Ray Milland and Jane Wyman in The Lost Weekend

Patrick and Scott discussed Don's reasons for drinking, and it is pretty much the point of the film. When Don goes to the bar the morning after, he talks to the bartender in a rude manner and speaks of his fears of not knowing when he may get his morning drink. After a couple of shots, he starts flirting with Gloria and he tells the bartender his and Helen's love story. He tells him of his insecurities.

I think Don drinks because it allows him excuses. When he is drunk he thinks he has created a great story. When he drinks he becomes brave, not caring what others think about him. Don wishes that he could always be courageous, out going and creative, but the only time he feels that way is when he is intoxicated.

One problem with drinking, is that it acts as the cure for the very problem it creates. Don wakes up hung over, feeling like shit. The quickest way to alleviate that awful feeling is to have another drink. It perpetuates itself into a vicious cycle. It is kind of like the bartender who serves liquor to patrons of his establishment and then looks on them with disgust after they get drunk on the very booze he encouraged them to buy. As Nat, the bartender says, "One's too many and a hundred's not enough."

Ray Milland does a good job portraying a man caught in a vicious downward spiral. I have never had a drinking problem but have met many people who have. I saw a lot of truth in Ray's performance and how Don is written.  The Lost Weekend is one of the most brutally honest old movies to be seen. So many years later our world still contains plenty of Don Birnam's struggling to get through their life. The ending however, betrays the integrity of the rest of the film as it hardly seems as truthful as what came before it.