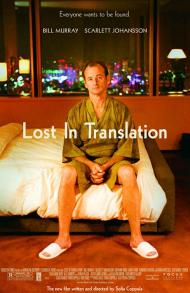 Bill Murray and Scarlett Johansson in Lost in Translation.

Lost In Translation, the latest movie from writer/director Sofia Coppola, is a touching love story that is both funny and sad. It is also refreshingly quirky and modern in style, while the fact that it was shot and takes place entirely in Tokyo gives it the flavor of a foreign film. But for all of Miss Coppola's skillful use of cinematic accessories it is the performances of the two main stars that makes this movie so enjoyable.

Bill Murray is Bob Harris, a movie star on the downward slope of his career. He's in Tokyo to make a whiskey commercial and he's also dealing with the fact that his 25-year marriage appears to be on the rocks. Bill Murray does a great job of under playing Bob Harris, a character it would seem he knows well. He tells us more with a look or a shrug than pages of dialogue could convey. His comedic timing and delivery are both right on as well, most noticeably in the scenes where he is filming the commercial. Definitely an Oscar caliber performance.

Relative newcomer Scarlett Johansson (Ghost World) plays Charlotte, the young wife of a neglectful photographer (Giovanni Rabisi) whom she's accompanied on an assignment to Japan. Bored and tired of being left alone while her husband works, she crosses paths with the equally lonely Bob Harris (they are staying at the same hotel) and the two strike up a tentative friendship despite the vast difference in their ages. Scarlett Johansson holds her own with Bill Murray and she has the technically more difficult role, although she has the advantage of having great dialogue to speak, courtesy of her very talented director.

What at first appears to be a friendship of convenience and boredom is realistically and wistfully transformed into one of deep caring and ultimately a full-blown romantic love. What sets Lost In Translation apart is that unlike a Woody Allen movie, for example, the love between Charlotte and Bob is never consummated. This adds a bittersweet innocence to the movie.

The city of Tokyo is like a third character. There are many shots of the neon glare of downtown as well as breathtaking views of the city from various hotel rooms, nightclubs and bars. They go to a Karaoke bar, go dancing in a discothèque, have a classic sushi dinner together. Having never been there I can only go by my gut and this feels like an authentic version of Japan.

Watching Charlotte and Bob's relationship evolve over the course of a week, as they explore Tokyo together is one of those rare cinematic experiences where all of the disparate elements that go into the making of a great movie are achieved. He is clearly having a mid-life crisis, in fact at one point Charlotte asks him if he has bought a Porsche yet. She, on the other hand, is two years into a marriage that she is beginning to realize is not what she wants. The only problem is she hasn't figured out what else she wants in its place. Two lonely souls who meet in an exotic setting, fall for each other and help each other to heal, is not exactly an original idea for a movie. Lost In Translation makes it feel like the first time.

Lost in Translation is, as Patrick says, funny and sad. It's a very small movie in terms of scope, but it packs a lot of emotion into the story of two people at the opposite ends of life, who find each other, and maybe themselves, through their short-lived relationship. Bill Murray and Scarlett Johansson both give Oscar worthy performances in one of the best movies of 2003.

Murray's performance as Bob Harris (which internet rumor tells us is based on Harrison Ford) is understated and restrained, as Patrick said, and is absolutely brilliant. His world-weariness is conveyed more through silence and looks than over the top moments of grandiosity. He puts humor, humanity, and pathos into his character.

For Johansson, the role of Charlotte is a break through. Although some might argue that she'd already broke through in Ghost World, that movie failed to give her star status or the name recognition that her part in this movie is sure to yield.

Together these two actors have helped to create a great and realistic love story. Unlike most movies where two characters see each other and are instantly in love, this movie shows their love evolve. Also, instead of ignoring their age differences, as most movies do when a much older man falls in love with a younger woman, this movie's premise is based upon that difference. And as Patrick points out, their love is never consummated, and instead leaves you with a feeling that at a different age and a different time in these two people's lives, they could have found happiness together.

Thanks to two great performances under the superb direction of Sofia Coppola, you are left with a movie and a relationship that will stay with you long after they have ended. 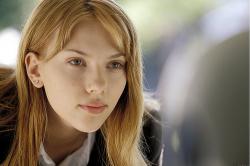 Lost in Translation gives Murray a chance to spread his acting wings. As my brothers have said, his underplaying is amazingly effective. I am not sure if this makes his performance great or am I just caught off guard to see Murray toned down.

The scene where he is shooting the commercial is great only because of who Murray is. Any one who knows his work would expect Murray to make all kinds of sarcastic, insulting jokes to the director. It is the lack of Murray acting like Murray that makes this scene great. The audience can practically read Murray's mind here. We know his humor and we are waiting for it. It doesn't come, so we imagine his punchline based simply on the nuance of his performance. If you have never seen Murray act before you may not appreciate these scene as much.

So much of what my brothers have said about this film is true. However, neither mentioned the pacing. Patrick wrote that Tokyo is practically a character in the movie. I would have preferred to see less of the scenery and more of the actors. The movie takes a while to get going. There are too many scenes of Scarlett or Bill alone that have little to no dialogue. A little editing, particularly early on, could have picked up the pace a bit.