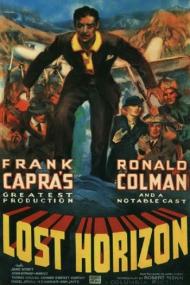 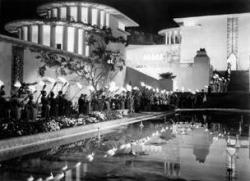 Shangri-La looks like a cross between Mt. Olympus and Beverly Hills!

As a kid growing up in the 1970’s I remember hearing Frank Capra’s Lost Horizon referred to as the Holy Grail of lost movies. What happened was every time the movie was reissued over the years more of it was cut out until by 1967 only a very truncated version remained. In 1973 the AFI launched an exhaustive world wide search to find the missing footage. Eventually the entire audio recording was discovered and all but 7 minutes of the 132 minute film. The restored version uses still photographs to fill in for the few brief scenes that were never found.

Based on a highly popular book of the 1930’s by James Hilton, Lost Horizon is a spectacular adventure tale best enjoyed without too much prior knowledge of its story.

It begins in a small city in China where Robert Conway, a highly regarded British diplomat, is overseeing the evacuation of 90 westerners as a bloody local rebellion is taking place. He winds up on a plane with his younger brother George and three other passengers, two men and a woman. Unbeknownst to them the plane has been hijacked and instead of flying east to Shanghai they are heading west towards Tibet.

The next day, after they discover they are traveling in the wrong direction, the plane makes a stop for refueling. None of the passengers are allowed to disembark and they continue on their way towards the Himalayas. They crash land high up in the snow covered peaks of the world’s tallest mountain range. The pilot is discovered dead from the crash. Just as the five remaining passengers are deciding what their next move will be they notice a group of people approaching from a path over the mountains.

Of course they find themselves in the utopian land of Shangri-La. It is a place cut off completely from the outside world, where there is no crime or disease and people never grow old. The mysteries of Shangri-La are slowly revealed as we meet its enigmatic inhabitants. It is a place of beauty and high ideals that in appearance is a cross between Mount Olympus and Beverly Hills.

All of the passengers adjust to life in their new surroundings except for kid brother George. He is determined to get back to civilization. If you want to know how the story unfolds the rest of the way you will have to watch the movie because I’m not going to give it away. I will just say that the ending is entirely satisfying.

The cast is lead by the debonair Ronald Colman and the dashing John Howard as the Conway brothers Robert and George. Ubiquitous character actors Thomas Mitchell and Edward Everett Horton play the other two male passengers. They quickly develop a joking camaraderie with Mitchell making fun of the effeminate Horton in a playful manner. He calls him affectionate nicknames like “sister”, “Lovey” and “Toots” throughout the movie.

Isabel Jewell (best remembered for playing the poor white trash Emmy Slattery in GWTW) plays the female passenger, Gloria. She is dying of tuberculosis and has already outlived her prognosis by six months. She gets a couple of dramatic scenes that she overacts superbly. After they crash and are faced with certain death she laughs hysterically and tells the others, “I’m going to enjoy watching you guys squirm for a change!”

H.B Warner, Sam Jaffe, Jane Wyatt and the actress known simply as Margo round out the cast as the blissful citizens of Shangri-La.

Lost Horizon is an epic in every sense of the word. It was expensive to make and took a long time to shoot. It tells a wonderful story filled with adventure and majesty and it surely ranks among the greatest movies ever to come out of Hollywood’s Golden Age. The restored version is an absolute must see! 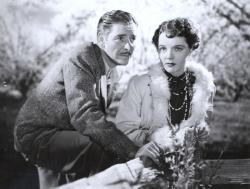 The idea behind the plot of this film and the novel upon which it's based, is an intriguing one. As the opening written notes say, it's a common fantasy for each of us in the modern world to dream of a place where there isn't any trouble or stress and where we'll never grow old or die. The idea that such a place actually exists in the world and we might stumble upon it is a nice fantasy. Unfortunately, a land without stress, conflict or tension isn't exactly the ideal setting for an exciting movie.

As Patrick wrote, over the years more and more of the movie was trimmed. Some of it was for commercial reasons. Capra accused executives at Columbia of reducing the running time so they could fit in more screenings to help earn back the high price of the film. Due to the large budget, it took 5 years for the studio to recoup its expenditure. Subsequent rereleases of the film by the studio would feature additional cuts, but these were for political reason. Editors during World War II felt that Robert Conway's anti-war speech wouldn't be good for the country's morale and so trimmed that scene. Then, in the 1950s, when the communist scare was at its height, the film would be rereleased and additional editors trimmed several further scenes that described the idyllic lifestyle of Shanrgi-La in what was deemed a communist manner. Although these trims were made for the wrong artistic reasons, I can't argue with trying to speed up the ponderous pace of the film. Unbelievably, Capra's first cut ran 6 hours long and the studio actually considered releasing it in two parts. When that idea was rejected, Capra produced a three hour version, but portions of a test audience walked out while others laughed at scenes that were meant to be dramatic. This sent Capra back to the editing room until he whittled it down to the 132 minute released version.

One of the film's biggest problems is that after the exciting opening, which involves a kidnapping by airplane and the unraveling of the mystery of Shangri-la, nothing much happens until the final 10 minutes. There are a few moments of humor, mostly provided by Thomas Mitchell and Edward Everett Horton, but too much time is spent on the nonsensical philosphy espoused by Chang and the High Lama. They describe the situation there as an egelatarian Utopia, but you'll notice it's the white people living in the palace up on the hill while the Asians work the land and act as servants for them in the valley below.

The actors are the film's greatest strength. Ronald Colman does a good job in the lead and John Howard's a decent second banana. They make a believable set of brothers. Isabel Jewell has the film's smallest part and I wonder how much of her story was lost in the original cuts. Her story doesn't develop nearly as much as the others. As the only woman of the party who arrives at Shangri-la, this feels like a missed opportunity.

The ending of the film is fairly classic. This was the first time I watched it, but I was well aware of the story and its conclusion. It has worked its way into modern mythology. It's just unfortunate that it takes so very long for the ending to be reached. 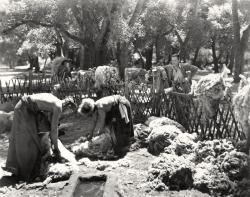 The meek watching the strong do all the work.

Many television shows owe a debt to Lost Horizon. With the mystery of what is going on with these people has the feel of a Twilight Zone episode. One line, “Gentlemen, I give you a toast. Here's my hope that Robert Conway will find his Shangri-La. Here's my hope that we all find our Shangri-La.” reminded me of a line from the Star Trek episode The Menagerie, “Captain Kirk. Captain Pike has an illusion, and you have reality. May you find your way as pleasurable.” The most obvious television show comparison is Lost, where a plane crashed in an isolated location and no one had a clue what was happening or where they were.

After arriving at Shangri-La, each of the five kidnap vicitms react differently to their suroundings. Some of them feel  trapped while others feel that they belong there. One even remarks that it gives him a feeling of déjà vu. Nothing about this place makes sense, leaving us to wonder if this is not a dream or an afterlife. Did these people die in the crash and this is their purgatory?

Shangri-La is presented as an ideal place of peace and harmony. The leaders act as if they are above the rest of the world. They tell of how shallow the real world is and how enlightened they all are. Everyone there is eternally happy and equal. What hypocrites!

We learn that they obtain all of their materialistic items by trading gold from their valley for goods occasionally brought by porters over the mountains. They cherish there “treasures” and live like Kings. I like Patrick’s description of Beverly Hills by way of Mount Olympus. As Scott pointed out, the elders live like royalty being served by servants, whose relatives slave in the fields and with the animals. Shangri-La is an ideal place for some.

Scott also wrote of the nonsensical philosophy espoused by Chang and the High Lama. Chang has this clinker, “Age is a limit we impose upon ourselves. You know, each time you Westerners celebrate your birthday, you build another fence around your minds.” Ignoring ones age does not change the process or keep us any younger.

The High Lama states at the end of a lecture, “When the strong have devoured each other, the Christian ethic may at last be fulfilled and the meek shall inherit the earth.” Who in the hell wants to live in a world dominated by the meek. The strong are the ones who build and explore. It sure as hell was not the meek you found and built Shangri-La, but it is the meek who take credit for it.

Frank Capra was not shy about making political and philosophical films. Lost Horizon is both but by no means his most entertaining. I understand that some may adore this kind of story, the same type of people who love Into the Wild (2007). People who think there is some place out there where their problems will not find them. There is no such place but it does not stop us from dreaming and writing about it.