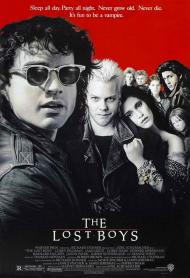 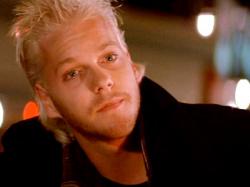 Kiefer Sutherland in The Lost Boys.

Some movies are timeless. No matter how old they get they still appeal to a new generation and you can watch it without constantly thinking about when it was made. The lost Boys was made in 1987 and is still worth a watch today. However, you cannot help but be constantly aware of when it was made.

Two brothers, Michael and Sam, move with their single mother to a small coastal town to live with their grandfather. The town is a haven for motorcycle riding, teenage looking vampires who want teenage, motorcycle riding Michael to join their brethren. Younger brother Sam soon discovers what is going on and elicits the help of the irrepressible Frog brothers who advice Sam to, "Kill your brother, you'll feel better."

The Frog brothers are a couple of kids who work at a comic book store by day and fight vampires by night. They steal every scene they are in and are the best thing about this movie. They have the best lines and are constantly making pop culture references. "Holy Shit! It's the attack of Eddie Munster!" "The bloodsucking Brady Bunch!" "We trashed the one that looks like Twisted Sister." "Where the hell are you from? Krypton?"

Speaking of Superman, 20 years after this film was made Superman Returns would edit the line, "Truth justice and the American way," by taking out the American way part. In 1987, liberal Hollywood was not so scared to be patriotic and the Frog brothers have this line, "This is just a cover, we're dedicated to a higher purpose. We're fighters for truth, justice, and the American way."

The Lost Boys is fairly predictable in plot but the pace is brisk and the Frog brothers are always around with a nice quip, "You'd better get yourself a garlic T-shirt, buddy, or it's your funeral." It is also interesting to see a young Jami Gertz, Keifer Sutherland Jason Patric with big 80's rocker hair.

Corey Feldman is to the 1980's what Shirley Temple was to the 1930's. He appeared in such classic 80's films as The Goonies, Gremlins, Stand By Me and one of the Friday the 13th movies. The Lost Boys is a decent film but the mere presence of Feldman makes this, without a doubt, a dated flick.