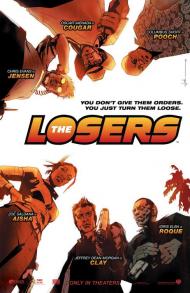 Losers is one of those movies that is hard to write about. Not enough of anything unique happens in the film to spark my interest in typing this. It contains the prerequisite action scenes, slimy bad guy, and explosions, but so has hundreds of movies. As I watched this, I felt that I had already seen it all before.

Some American soldiers are betrayed while on a mission in Bolivia. They are believed to have been killed in action. They survived, and with the help of a mysterious girl, who seems to know way too much, they plot their revenge on the man in the U.S. Government, who is responsible for trying to have them killed.

What follows is a series of action sequences that involve some Mission Impossible set ups. The soldiers are pretty standard stereotypes. One is a family man, whose wife is expecting. One ends up betraying the others. One is the comic relief. One is the hard nosed leader. Another is only notable because he is a great sniper.

Zoe Saldana is the “It” girl of the moment. After Star Trek and Avatar, she is on a hot streak normally reserved for male stars. She has several decent fight scenes, but is merely adequate in this role. A plot twist is meant to add some tension to her charcter, but it fails to generate any.

My favorite character is that of Jensen, played by Chris Evans. He, of all the characters, seems to be having the most fun. His best moment is when he sneaks into an office building disguised as a delivery man. He wears an Ipod, and sings obnoxiously loud to stop others from getting into an elevator with him, so he can change clothes in it.

Losers will keep your attention the whole time. It is an action film and delivers the goods. I was almost excited when they showed the bad guy making a deal with some middle eastern men in Dubai. Finally, I thought, a film that will show Muslims as bad guys. Then they announce that they are Hindu. Nothing original here. 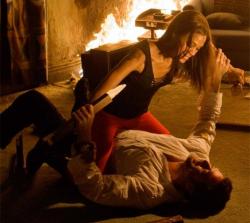 Zoe Saldana and Jeffrey Dean Morgan in The Loser.

I thought that the way this movie displayed the locations by blending the names of the places into the landscape was original.  So there's one thing, Eric.  Other than that though, I have to agree with you in that there's not much here that we haven't seen done dozens of times in the past.  In fact, when I first saw the trailer for this in the theaters I actually thought it was a trailer for The A-Team because the general idea behind the two movies seems to be similar.

Granted, the cast is generally likable.  I agree that Chris Evans as Jensen is one of the highlights.  He captures just the right light-hearted tone that the movie requires, while too often the rest of the cast are playing their roles with deadly earnestness.  Although I do think that Zoe (who is soooo hot right now) does a better job than you imply.  If her character lacks that something extra to make her truly memorable, I think it has more to do with the writing than it does with her talent or charisma.

All the right elements seem to be in place here.  A good cast, plenty of action and explosions in different locales, a slimy villain, some stylish direction, but only a so-so and not-too-original script undercut its effectiveness.