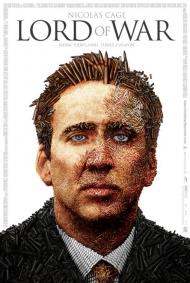 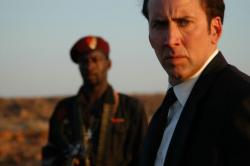 Nicolas Cage in Lord of War.

The Lord of War has a lot of potential, but it never reaches it. Its story of a successful gunrunner, played by Nicolas Cage, plays out more like a lecture on violence in the world than as an entertaining movie.

Yuri Orlov (Cage) is a Russian immigrant who grew up in Brooklyn. With no other motivation than witnessing a gangland murder, he decides his future is in selling guns. The movie then explains away how he manages to go from son of a restaurant owner to international arms dealer with vague mentions of a connection of his father's. Soon he is jetting all over the world with his coke addicted and morally conflicted brother (Leto) and making deals with all levels of dictators, war lords and anyone else willing to buy his merchandise.

Unlike old time arms dealers, represented in the movie by Ian Holm, Yuri never takes sides and willingly sells to anyone irregardless of their political leanings and without ever questioning who they want to use his merchandise to kill. Just why Yuri lacks any sense of morality is never explained and it horribly weakens the story. The only explanation he gives for why he does it is because "He's good at it."

Business really takes off for Yuri following the fall of communism. With the help of an Uncle in the former Red army, Yuri is soon selling former-soviet guns all over the world. His success though, has drawn attention to himself and Interpol is soon tailing him.

The movie is long and depressing. Cage gives a good performance as Yuri, but without a solid explanation as to why he has no morals, it's impossible to empathize or feel anything toward him. And since he's in every scene, that's a long time to watch a movie without a central character you can care about. At least the lesser characters are provided with a motivation. Leto, who has a conscience, turns to drugs and eventually is forced out of the business by his addiction. Yuri's trophy wife (Moynahan) happily turns a blind eye to her husband's business, luxuriating in the Central Park West apartment while he travels the world.

Where the movie works best, is in its humor. Cage is given some funny lines and this aspect should have been played up even more. It certainly is in the previews, and was the reason why I wanted to see it. There is plenty of room for truly dark humor in the subject matter. The use of jokes could have conveyed this movie's message in much more subtle manner and with a comedy you can get away with two-dimensional characters.

The potential for more humor, like the rest of the story, goes unfulfilled, just like the audience for this movie will be.