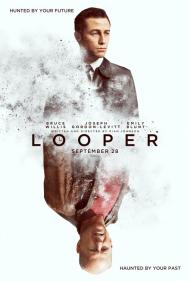 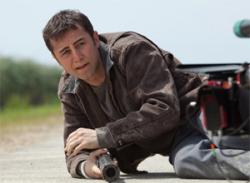 Looper is a high concept time travel movie that works in spite of a few plot holes. Like most time travel stories, there are paradoxes here that it's best not to think too much about. Just sit back and enjoy the action and the story.

Joseph Gordon-Levitt is this year's hardest working man in Hollywood. Looper marks the third of four movies in 2012 in which he appears. This time he's paired with Bruce Willis, although Gordon-Levitt plays the lead. With some clever makeup and CGI that seems to center mainly on the nose, the two actors are able to believably play the same character at different ages. At least they look like the same character. Gordon-Levitt never quite manages to seem as dangerous or as bad-ass as Bruce Willis, despite the fact that Willis is now pushing 60.

The plot is one that requires some explaining. It is set in 2044. We are informed by voiceover that time travel hasn't been invented yet, but in 30 years time it will, where it will be made illegal right away. Mobsters in that future will use the illegal technology to dispose of those they want dead. They send their victims back in time to 2044 where assassins known as Loopers, execute them and dispose of their body.

Gordon-Levitt continues his march to the A-List as a Looper named Joe. He's a young hotshot who lives what he sees as the good life in a dismal looking future America. Things go wrong for him when one of the victims that is sent back for him to kill, turns out to be his future self, played by Bruce Willis. This older Joe manages to escape and the younger Joe must track him down and kill him before his employers track him down.

The story hinges on this concept of time travel as the method of execution, the reasons for which are quickly glossed over. Supposedly in the future it has become difficult to dispose of bodies because of some kind of tagging. Yet at one point we are shown the future where someone important to the story is casually killed and no one seems to care or worry about what they'll do with the body. Why not kill the person in the future and then simply send the dead body back in time?

Putting that aside though, this is an entertaining and tensely made action film. Gordon-Levitt is a likable actor who keeps you rooting for him despite playing a selfish, drug-addicted assassin. Willis being Willis means that when he shows up in the story, you already know what to expect from him. When's he's captured and brought into the villain's headquarters at one point, you know what the end result will be, despite the number of guards on the premises.

Halfway through the film, the story does change pace. Joe ends up on a farm with Sarah (Emily Blunt, 2012's hardest working woman in Hollywood) and her son. I don't want to give too much away, but suffice to say that the plot brings up the old idea of if you could go back in time and kill Hitler as a small child, would you do it? It's an interesting idea, but for a good portion of the third act the pace of the movie goes from fourth gear down to first. If any area of the story could have been trimmed, it's this portion. The child actor playing Sarah's son is also not that good, although this has more to do with the dialogue he's given, which is melodramatic and sounds nothing like what you'd expect a 10 year old to sound like.

Credit should also go to the production team for creating a believable looking future and one that doesn't look like a ripoff of Bladerunner, as so many Sci-Fi movies do. Instead of drastically changing, the world of 2044 looks like ours, but with differences that look like they actually evolved from our time. It's all in the background, but it's enough to make this future feel like a realistic possibility, albeit a rather pessimistic one.

Despite a few weak points, Looper is a fairly solid piece of entertainment. 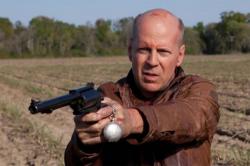 Looper does have an uneven pacing and the order in which the story is told is a bit odd.  We see storylines we do not need to.  It all ends on an ironic note. A simpler plot and a bit more action could have greatly helped this movie out.  However, if those changes were made it would be even clearer that we were merely watching a variation of Terminator.

With this film, a Bruce Willis character travels through time and meets his younger/older self for the third time. The other two are Twelve Monkeys (1995) and The Kid (2000). Scott called Gordon -Levitt,"this year's hardest working man in Hollywood." However, you could argue that Willis is the hardest working actor in Hollywood period. Looper marks the fifth of six movies in 2012 in which he appears.

The prosthetic nose and eye contacts helped change Gordon-Levitt's appearance to resemble Willis's. Reportedly he watched a bunch of Bruce Willis's films so as to learn to mimic his mannerisms as well.  It is most obvious in an early scene when he sits opposite Jeff Daniels. Every line seems as if Bruce Willis is channeling them through Gordon-Levitt.

I disagree with Scott about the child actor.  Cid is an exceptional child with amazing abilities.  He is not supposed to sound like how we imagine a child to sound.

Time travel movies are always convoluted messes, whose concepts of time travel we must accept to enjoy the story. Questions such as why did the Rainmaker choose that particular time period to send people to, to be killed must be ignored.  Why not send them even further back before he was born so as to avoid the whole, "...go back in time and kill Hitler as a small child..." idea?

Not only is the love story between young Joe and Sara a pace killer, we also have a couple of needless scenes with young Joe and his stripper friend doing drugs.  The point is to show that he has no one important in his life but a topless Perabo is not enough to make those scenes worthwhile, when a line of explanation could have covered his state of loneliness quicker and better. The biggest scene that needed to be cut was of old Joe in the future with his wife.  Again a brief conversation could have conveyed as much emotion and meaning as actually showing her. She does not speak even one line.

Spoiler alert. I liked the film's ending where we discover that it was Joe's actions that inadvertently caused the very problems that he himself is desperately fighting to stop. As greatly ironic as that is, it is not enough to elevate this poorly edited film. 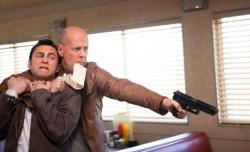 Let me begin by saying I agree with Eric about the child actor, Pierce Gagnon. He does a remarkable job. Not only with the dialogue but with just an intense stare. He conveys anger like an old pro. Yes Emily Blunt's character does say he's ten (perhaps to account for his advanced intellectual capacity?) but it also clearly states he was born in 2039 and the movie is set in 2044. Besides Pierce Gagnon was born in 2005, there is no way he looks ten years old.

Now that I have that out of the way I do agree with just about everything else Scott wrote. The plot is a bit convoluted but it is nonetheless enjoyable and the scenes on the farm slow the action down too much. Gordon-Levitt does a good job mimicking Bruce Willis. The CGI makeup helps but he has his mannerisms down pat as well.

Time travel is obviously not possible (I figured this out as a small child. I mean, c'mon if time travel ever becomes possible then why hasn't anyone from the future ever traveled back in time? It also would mean that all of history -past, present and future- is happening simultaneously and that there are an infinite number of lives each of us is living). As a movie device it has to be taken with a grain of salt and not pondered too deeply.

The idea of being able to meet our older or younger self (depending on what age you are) is intriguing but the script fails to take full advantage of the conceptual possibilities. It is interesting to note that the younger Joe has a big edge in fighting his older self. After all he can kill his older self while Old Joe cannot even seriously harm his younger self without risking permanent damage to his own body.

The ending is good. Joe's ultimate sacrifice raises the movie's consciousness. As he explains, “Then I saw it, I saw a mom who would die for her son, a man who would kill for his wife, a boy, angry and alone, laid out in front of him the bad path. I saw it and the path was a circle, round and round. So I changed it.”

Looper is an entertaining, if flawed, time travel movie with a better than average ending. 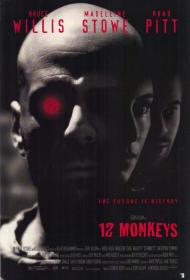