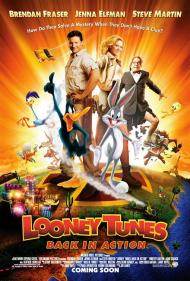 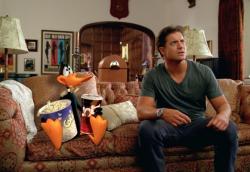 Daffy Duck and Brendan Fraser in Looney Tunes: Back in Action.

Like many people my age or older, I grew up watching Bugs Bunny cartoons. One of the great things about them was that since many of them were made as shorts that were shown before theatrical movies, and therefore had to please both children and adults, they were multi-layered with jokes that worked whether you were a child, a teenager, or a grown-up. One of the other great things about them was that they evoked a sense of old Hollywood, back when the studio was king. In Looney Tunes: Back in Action, director Joe Dante, a talented cast of human actors, and animators have managed to recapture the magic of those old cartoons providing entertainment for a new generation of children and nostalgia for those no longer children.

Combining animation and live action, ala Who Framed Roger Rabbit, the movie tells the story of the search for the Blue Monkey, a magical diamond that can turn people into monkeys. Bugs and Daffy join forces with Warner Brothers security guard and would-be stuntman D.J. Drake (Fraser) and studio executive Kate Houghton (Elfman) in an effort to track down the diamond before the Chairman of the Acme corporation (Martin) can find it and use the gem to turn the whole world into monkey slaves who will work in his factories (before turning them back into humans so that they can buy his products). Adding to the good guys motivation to find the diamond is the fact that the Chairman has kidnapped DJ's father, Damian Drake (Timothy Dalton), the celebrated British Actor of a series of spy movies, and one of the studio's biggest stars.

Their quest takes them around the world, from the Warner Brother's commissary, where many famous Warner Brother's players turn up, to Yosemite Sam's Wooden Nickel casino in Las Vegas, into the mysterious Area 52 (for which Area 51 is only a cover), through the Louvre in Paris in an imaginative and well animated scene wherein Bugs and Daffy take on the style of drawing of the various paintings they run through, and then on to deepest Africa, before finally climaxing in outer space.

The laughs come flying at you along the way, and while many are aimed at children, more time seems to have been spent on the jokes aimed at grown-ups. At one point Bugs is surprised in the shower by Elfman's character, and what follows is a hilarious Pyscho spoof that probably won't register with children at all. Area 52 is filled with B-monsters from 1950's sci-fi movies (Robbie the Robot, Daleks, etc.), which again children probably won't recognize. Children, or the inattentive, also might miss the many signs, posters, and background gags that abound in this film. (Try to read all the movie posters you see in the background!)

While Bugs and Daffy get all the funniest jokes, Fraser manages to hold his own and plays convincingly against the animated characters. Elfman is fine as well, but doesn't quite throw herself into the movie as much as Fraser. Martin's Chairman is completely over the top and never quite works. God knows where he found that accent! And Dalton, playing himself and spoofing his old Bond days, does well as DJ's father.

Not having children myself, I can't really tell you how children will react to this movie (I'll leave that to my brother Eric and his two sons), but I can tell you that as an aging Gen-Xer, this movie brought back memories and laughs from my own childhood. 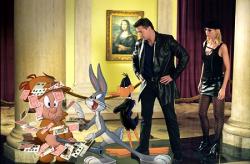 My sons loved this movie! The makers of this film knew their target audience well. Both boys were completely thrilled by the cameo appearances. "That's Batman!" one yelled out loud in the theatre. The other one was excited about Daffy turning into Duck Dodgers.

The pace is more frantic than a sugared up 7 year old. The jokes come at you faster than you can sometimes follow. Often someone is making a joke in the foreground while in the background something else is happening as well. This is definitely a movie I will buy on DVD. I will have to watch it again to catch everything.

As Scott wrote, this movie appeals to parents and children. However, so much of the plot is just there for the sake of the joke. In a scene near the end of the movie, one character turns into several different people, including Michael Jordan, for no apparent reason. Daffy Duck comments that "this makes absolutely no sense..." Okay, it is a movie with animation and real people coexisting, but at this point in the movie the antics seem to get a bit over done. However, it's short and it ends before you have time to realize that you just watched a bunch of 5 minute cartoons put together to make one thinly plotted movie. A bunch of good cartoons though. 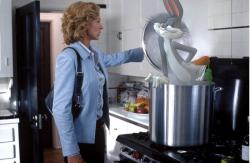 Jenna Elfman and Bugs Bunny in Looney Tunes: Back in Action.

Looney Tunes: Back in Action is exactly what it set out to be. It's either your cup of tea or not but it very successfully is what it is, which is not only funny and fast paced but also a clever and well executed homage to classic Hollywood and American culture in general.

For example Looney Tunes carries on the fine tradition that cartoons have of introducing highbrow culture to children. Most Americans heard their first classical music watching some cartoon or other, Tom & Jerry or Fantasia perhaps. With Looney Tunes it's masterpiece paintings, the scene that Scott mentioned. Bugs and Daffy hide from Elmer Fudd by climbing (shades of Streisand in Color Me Barbra) into various classic paintings. After which Bugs Bunny says, "I always think you should learn a little something at a movie." It isn't a lesson because it's delivered as a wisecrack aimed at a bit of business, but it is clear what Bugs is really referring to. Well done.

I also enjoyed the fact that there was no real tension in any of the action scenes. Normally this is a bad thing in a movie. Here it works. The reason it works is because even though the animated characters are performing opposite real actors in a real setting, in every other sense, and after all, it's a cartoon world. All you have to do is sit back and lose yourself in the nostalgic silliness.