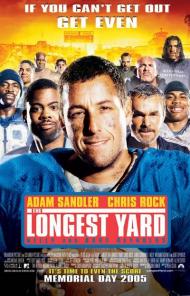 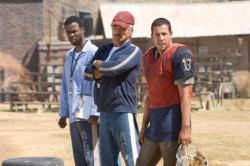 It's easy to see why the original 1974 version of The Longest Yard worked better than this modern remake. Its theme of sticking it to the man would definitely play better in the Nixon/Watergate era than it does today. Despite the heavy-handed and oftentimes sadistic behavior of the guards, it's still difficult to get behind and cheer for a bunch of prison inmates who might possibly be rapists, murders or who knows what (since it's never revealed). Although it's not just the social changing of the times that hinders this movie, it is also its overly long running time and its combination of drama that's not dramatic enough and comedy that's not funny enough.

Sandler stars as Paul Crewe, a former NFL quarterback famous for having thrown a game once. After a televised drunken drive, he ends up in prison where the Warden asks him to help train his prison league football team. Reluctant at first, after a week in the 'box' Crewe comes around and tells the Warden that what he needs is a practice game. The Warden thinks this is a great idea and assigns Crewe the task of putting together a team of inmates to play the guards.

With the help of Caretaker (Rock), a prisoner able to scrounge anything, and former Heisman trophy winner Nate Scarborough (Reynolds, who starred in the original), Crewe is soon handpicking the largest and most violent inmates that he can find. As Nate puts it, "We may not have the most talented players, but we'll certainly have the meanest."

It is the assembling of the team that takes up the most time in the story and it becomes fairly repetitive. Crewe sees a succession of larger more psychopathic, but basically personality-less, inmates and asks them to join his team. They refuse. The guards do something mean to that inmate and then he agrees to play on the team.

The climactic game itself, which almost takes up as much time as the assembling of the team, at times feels as though you are watching an actual football game (albeit a nasty violent one) in real time, as down after down is played and shown.

Of the entire cast, it is Rock as Caretaker who gets the most laughs. Sandler is basically playing the straight man and Reynolds' character, despite the nostalgia factor, could have been played by anyone or left out altogether. Although Tracy Morgan, continuing the trend of homophobic humor so prevalent in Sandler's films, does sneak in a few laughs as the transvestite prison cheerleader.

The movie even tries to throw in some drama by having one of the main characters killed off just before the day of the game, but this is hardly the cast or the movie to make such a plot development succeed.

It's been many years since I've seen the original The Longest Yard and so it's possible that my memory isn't so accurate, but I do remember enjoying it. While there are bright moments in this version, on the whole I can't say the same thing about it. 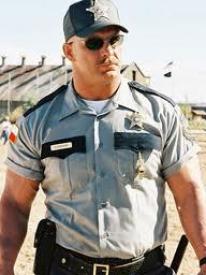 Exactly Scott.  How and why am I expected to root for a bunch of criminals?  The movie goes out of it's way to show the guards and warden as cruel, but no matter how sadistic any of them acted, I never cared for the convicts.   It mattered not if the criminals won or lost the game.

Adam Sandler as  Paul is no more likable than any of them.  He fixed a game which is a cardinal sin of sports fans and completely without honor.  He is a drunk, who endangered many peoples lives by driving under the influence.  The worst thing about Paul is that he is played by Sandler.   He may have found his niche in sentimental comedy, but all 5' 10" of him has never been convincing as an athlete, especially a Heisman trophy winner?

My WWE loving son was thrilled to discover all the wrestlers in this film.  They all have small roles but they steal many scenes.   Dalip Singh (The Great Kahli) kicking a guy in the head is worth the watch alone.  Kevin Nash is hysterical after mistakenly taking too many estrogen pills. "If you have to cry, it's okay. I'll cry with you."

The Longest Yard contains a few laughs but lacks any real motive worth concerning the audience over.   A bunch of murderers, thieves, rapists and drunks want to win a football game, and I am supposed to care because some guards are mean?  Had any of these lowlifes not committed their said crime, the guards would not have been an issue.