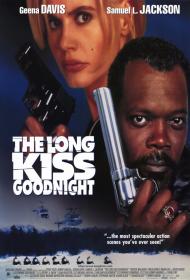 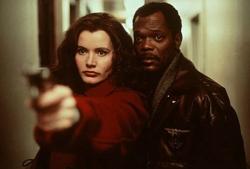 Scott and I first saw The Long Kiss Goodnight in theaters when it was first released. This fast paced, rated R action flick kept us very entertained with its over the top lines and action scenes. As I watched this movie again, it struck me that it now has many new points of interest.

Tarantino's Kill Bill steals heavily from The Long Kiss Goodnight. In The Long Kiss Goodnight, a happy homemaker discovers that she was actually a trained assassin. Upon surviving an attempt on her life, she wakes in a hospital and begins a new life. However, a visit by a former enemy leads to a domestic battle more brutal than the one in Kill Bill and convinces her that she has some secrets to discover. Eventually it all comes back and she seeks revenge on her opponents. That big revealed secret about who was the father of Thurman's baby in Kill Bill is similarly used here.

Another interesting angle to this movie is that it was made in 1996. Before 9/11. All of you conspiracy nut balls take note. In this film, a U.S. government agency plans a major terrorist attack on American soil, in which thousands of lives will be lost. The agency has bodies of Middle Eastern men to place at the scene of the attack so as to blame Muslim terrorists. They are doing this to get more funding. It is just something for the "blame America first" crowd to think about. You know, the ones who thought President Bush was behind the 9/11 attacks.

All of the above now adds to this movie. However, I still love it for the action and the lines. Two of the best lines come near the end of the movie. Samantha (Geena Davis) is driving a truck through a barricade as she yells, "Suck my dick everyone of you bastards." Moments later, the assumed dead Mitch (Samuel L. Jackson) drives a car out of the back of a semi yelling, "That's right. You can't kill me mother fuckers!" The language is so over the top that it's more funny than offensive. At one point Samantha and Mitch are both caught, and as the bad guys are separating them, Mitch says to Samantha; "I'll be waiting for you to come rescue me." To which Samantha responds nonchalantly, "I'll just be a minute."

Geena Davis is great as the Martha Stewart who turns into Ripley from Aliens. Samantha is bloodied more times than I can count. Samantha is so tough in this movie that you know nothing can stop her. It is not because she has some super power, but because she can take pain and abuse better than a Detroit sports team.

Samuel L Jackson found his acting groove as Mitch. He is a down and out former jailbird. He has a son from a woman who can't stand him. Mitch could have easily been nothing more than comic relief but Jackson gives his character humanity and weakness. Craig Bierko made his screen debut in this movie. I wonder how he got the roll when his biggest success before this movie was in musical theater. The fact that this guy can pull off playing a government-trained assassin with only occasionally overacting is testament to his potential.

The big plus in this action movie is that it constantly keeps the tone serious and consistent. Even when it goes for a comic scene, it has a feel of tension. My favorite is when Mitch thinks he's saving Samantha from a guy in an alley. The guy has a gun to her head as they argue over whether he is really saving her or not. The Long Kiss Goodnight is a great adult action flick. 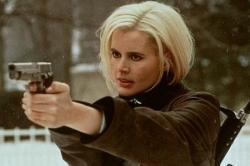 Eric is right, this is a great adult action flick. It features everything you want from a lightweight action movie: funny dialogue, absurd action and cool characters. It does have similarities with Kill Bill but instead of artistic aspiration it has straightforward Hollywood formula.

Geena Davis hits all the right notes as the amnesiac housewife rediscovering her past as a trained government assassin and Sam Jackson is wonderful as the low rent detective she hires to help her unearth her buried memories, and who ends up getting in way over his head. His reaction as PTA member Samantha Caine morphs back into bad-ass killer Charlie Baltimore before his very eyes is classic. I like the fact that both characters get a chance at playing the hero, Mitch, at the end, repaying Charlie for the several times she saved his life. The last thirty minutes will have you cheering them along.

I'm confused by Eric's comments about this movie being “something for you 'blame America first' crowd to think about." Unless he means it as a way of supporting conspiracy theory's, which, knowing my brother I don't think he does. If anything this movie is going to increase the number of conspiracy theorists. It openly portrays members of our own government as being ruthless enough to commit heinous acts of terrorism for a profit.

Great dialogue and well-conjured images can turn an average spin around the movie block into a memorable luxury joyride. This is exactly the case with Long Kiss Goodnight. As Eric wrote this movie has a plethora of great lines. When Charlie comes on to Mitch he states, 'The last time I got blown, candy bars cost a nickel.' Later when Charlie and her daughter are locked in a freezer the kid asks her mom if she is going to die. Charlie responds, 'Oh, no, baby, no. You're not going to die. They are. Cover your ears. Hey, should we get a dog?' Likewise there are several famous images that add to the enjoyment level, whether it's Charlie tearing across a frozen pond on ice skates with a semiautomatic rifle slung over her shoulder, or the climactic scene where she hangs with one hand from a string of lights while using her other hand to blast the bad guy as he rides in a helicopter.

The Long Kiss Goodnight is one of the most purely entertaining action movies of the last decade. 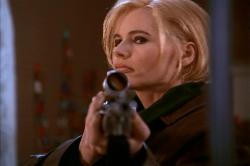 Both Eric and Patrick hit the right note when they used the word 'entertaining' to describe The Long Kiss Goodnight. Without a doubt this is one of the most entertaining action movies of, not only the past decade, but all time. It is definitely over the top, but the director (Renny Harlin), the screenwriters, and the cast all know it. The action and the acting are unabashedly tongue-in-cheek without detracting from the tension. This is an overlooked classic of its genre.

Geena Davis is great in this role. Regrettably this was also her last starring role. Her only other big screen appearances since this movie, were as Mrs. Little in the two Stuart Little films. And the fact that she was 40 years old when she starred in The Long Kiss Goodnight just goes to show that casting directors shouldn't rush to the 20-somethings every time they cast a female lead. Not only does Davis handle the action sequences well, she manages to look sexy while doing it.

As good as Davis is as Charlie/Samantha, Samuel L. Jackson practically steals this movie as Mitch. His down and out private eye is so colorful and funny that he nearly deserves a movie of his own. Both my brothers have already mentioned enough of his great lines that I won't bother to repeat them here. If nothing else, Mitch's wardrobe alone is worth the price of a movie rental.

For some reason, this movie failed to create a spark at the box office. Budgeted at $65 million, it only took in $33 million. Overlooked during its initial release, I believe this movie is destined for cult status and will be rediscovered one day. Personally, I'm just sorry they never made a sequel.