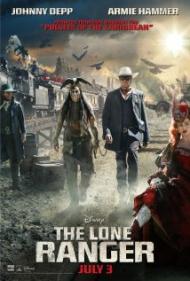 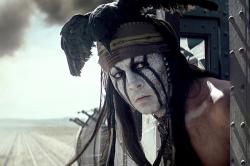 Johnny Depp as Tonto in The Lone Ranger.

I've often complained about the length of movies these days, but none in recent memory have been so worthy of that particular criticism as The Lone Ranger. At 2 and a half hours, it is easily an hour too long. Its plot is a simple one that's straight out of the old b-movie westerns of the 1950s and Clayton Moore and Jay Silverheels could have wrapped the whole thing up in 30 minutes. It's not the movie's only problem, but it exacerbates all of the other ones.

Compounding the length problem is a framing device that serves no real purpose. The movie opens in 1933 with a small boy visiting a circus. In a tent devoted to the Wild West, he comes across a display of the Noble Savage that contains an aged Tonto (Depp in heavy makeup/CGI) who proceeds to tell the boy the story of the Lone Ranger. The film cuts back to old Tonto relating the tale from time to time, succeeding in lengthening the movie without adding anything to it.

As the story proper begins, John Reid is traveling by train back to his hometown in Texas. Like Jimmy Stewart in The Man Who Shot Liberty Vallance, he's a lawyer who thinks that he can serve justice better out of his law books than with a gun. Shortly after his arrival amid a gang attack and a derailed train, he rides out with his brother and a group of Texas Rangers after Butch Cavendish and his gang. Following an ambush all of the Rangers are left for dead, with only John surviving. He's rescued by Tonto, who is also seeking revenge on Cavendish, and who convinces John that he's better off wearing a mask to hide his true identity. This simple revenge tale is then stretched out with an uneven tone that meanders for another hour and a half beyond this point.

The film is directed by Gore Verbinski, who reportedly suggested Depp for the role of Tonto. While no one today would dream of putting on black face, apparently it's still okay to don red face. Depp hasn't helped matters by first claiming an unsupported Native American heritage and then saying things like, "I wanted to maybe give some hope to kids on the reservations. They're living without running water and seeing problems with drugs and booze. But I wanted to be able to show these kids, 'Fuck that! You're still warriors, man.'" Because apparently in Depp's mind, the best way to give young Native Americans hope is to show them a white man pretending to be one of them and then make condescending remarks about them.

Although I realize my review has sounded fairly harsh so far, I should hasten to add that there are some enjoyable aspects of this film. Depp makes some odd choices while playing Tonto, but he does provide some laughs. He and Armie Hammer share a good buddy relationship that keeps things light. The film is sandwiched at the beginning and end by two spectacular train wrecks. The finale seems to be paying tribute to Buster Keaton's The General, and although Depp is no Keaton, his antics are enjoyable. If only it didn't take so long to get to that finale.

There's also the occasionally uneven tone. Most of it is played lightly, but with a few darker moment thrown in, such as the eating of a human heart and the slaughter of an attacking Indian tribe. These moments never quite work as well as the comedic ones.

The biggest question surrounding this movie is why would Disney make it? Especially at the reported cost of $250 million. If there's a single movie genre that's truly dead, it's the Western. The only built-in audience is an aging one who might remember watching the television series some fifty or sixty years ago. And that audience isn't likely to be overly pleased by the slightly revisionist take on the story. Teenagers and kids today are unlikely to have even heard of the masked man and his faithful Indian sidekick. A smaller film would have seemed to be the smarter way to go. 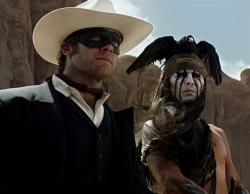 Armie Hammer and Johnny Depp in The lone Ranger

Although the western genre has certainly seen its day, I believe there are still many great stories to tell of the old west. The Lone Ranger, as depicted here, is sadly not one of them. As Scott wrote, this is little more than a revenge film featuring dirty cowboys, mystical Indians and greedy railroad owners. All are tired staples and stereotypes of the western film.

It starts with the idea that John Reid is against the use of guns. He tells his brother, “I don’t believe in guns.” when he is part of a posse, chasing after known murderers. Exactly how he thinks he is going to contribute to Cavendish’s capture without a gun is typical pacifist thinking. It sounds nice but is utterly illogical and impractical. Later he carries and uses a gun, although he still tries to act as if he is above it.

That is one of the many problems with this film. The Lone Ranger is never clearly defined. Is he a pacifist? Obviously not as he often gets into fights, but then what is the point of him acting like guns are so bad. If he wants to ride atop his high horse about not wanting to use a gun then would it not have been better to have Tonto support him in that, instead of mocking him about it throughout the film.

Another is the horrible editing. At one point Tonto and The Lone Ranger are chained together on top of a moving train when they throw the chain over a hook on a water tower spigot causing them to swing off the roof of the train, kick some baddies and what not. When those antics are done we next see our heroes unchained without even knowing how they got off that spigot. When Tonto heals The Lone Ranger, he wakes up on top of a structure of wood on top of a lone high steep sided rock formation. There are no trees in sight and no means by which he could have built it there, let alone carried The Lone Ranger up and on to it. We never see him climb down.

This film tries to be a comedy with Depp acting the fool. He creates joke after joke with his code of trading. He constantly feeds his dead raven from crumbs/corn that seem to come out of nowhere. Later we learn of a very dramatic occurrence that shaped who Tonto is. It is almost too dark of a plot device for a film with such laughable scenes as a blindfolded Ranger being pushed through the middle a gun fight for a laugh.

Speaking of dark moments, Butch Cavendish is a cannibal who literally eats human body parts. Really? Here is a film about an old man telling a story to a young boy that features a bad guy who eats a man’s heart that he cuts out of him as he lies dying. Then we have silly moments of levity, usually provided by Depp.

Although Cavendish has a taste for human flesh, there is never even the slightest amount of tension to be found here. Tonto and The Lone Ranger at one point get buried up to their necks just before a detachment of cavalry ride over them. Miraculously none of the many horse’s hooves ever kick either in the head. When John gets shot with an arrow, he screams like a girl for a laugh. You have Saturday morning cartoon action scenes mixed with “R” rated villains.

The one person who seems to always be in danger is Rebecca, the girl John Reid has forever pined over, but for some reason married his brother instead of him. Her ranch gets attacked. She gets abducted. Cavendish threatens to eat her. She gets pushed off a train. Hell, even Tonto hits her in the head with a rock.

The film hints that something else is going on with Rebecca’s and John’s relationship. Pay attention to the dates of when they broke up and how old her son Danny is. Near the end, Danny yells out, “Is my Daddy dead?” Rebecca then looks at John and gives Danny a non-answer, leading us to believe perhaps The Lone Ranger is his biological father.

The movie is loaded with insinuations. Clearly Helena Bonham Carter is a madam of a whore house but all it is referred to as, is “a dance hall” and a “House of sin.” Although we know, it never says what sin. One of the bad guys is even a cross dresser, who wears some amount of feminine clothing the entire film. At one point The Lone Ranger tries to get him to talk, He says if he does not, Tonto will do something. The cross dresser asks with some interest, “What does he want to do to me?”

The real sinner of the movie is of course greedy rich white men. The building of the continental railroad tracks are depicted here as just a means of spreading capitalism. Even after the real bad guys are defeated, the owner of the railroad tries to bribe The Lone Ranger. Those diabolical capitalists will stop at nothing.

The three writers of The Lone Ranger obviously could not decide on a tone for this film. Is it a comedy? Is it an action film? Is it a love story? Is it political propaganda movie with a semi-pacifist hero? It is all of these things and yet none of them.

Where they truly missed the mark is on the lead character. Sure, Depp is the bigger star, and the laughs he provides work better than the drama, but The Lone Ranger is the movie's hero. Unfortunately John Reid is a fairly dull character throughout the overly long running time. Is he a noble hero, wanting to bring the bad guys to justice without firing a gun shot. Is he a lovelorn sap who unknowingly fathered a child out of wedlock and then went off to college, forcing his pregnant girlfriend to marry his brother? Armie Hammer has a certain amount of comic charm, but he is not able to raise his character out of the quagmire of bad writing.

The Lone Ranger is not an easy sell. It'snot a character that is well known today with younger audiences. My teenage sons knew nothing of his history. The appearance of his horse, “Silver” did not register with them, nor did the use of a silver bullet. The biggest miss was when the William Tell Overture played and neither of my sons recognized it. Everyone of a certain age knows that as The Lone Rangers theme, and I have to admit it did put a smile on my face when I heard it. 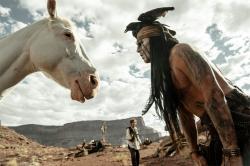 Armie Hammer and Johnny Depp in The Lone Ranger.

Trite, insipid, tone deaf, and filled with ridiculous action sequences, The Lone Ranger plods on for far too long. Depp looks and acts like a demented sideshow freak while hijacking the movie away from the titular character. Hammer is underused and when he is onscreen he makes a rather dull hero, although he does at least look the part. This beloved mid-20th Century children's character of radio and television fame has been dumbed-down and vulgarized almost beyond recognition. Clayton Moore is probably still turning over in his grave.