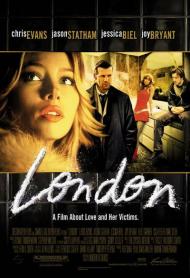 I have always thought of Jason Statham as just a tough Brit action star. I never gave Chris Evans any more thought than he has been getting by on a smile. Jessica Biel’s charm has almost escaped me completely. At least that is how they all came across in Cellular. In London however, they changed my opinion.

Syd is an arrogant, insecure twenty something whose former girlfriend, that he is still in love with, is moving out of state. He crashes her good bye party with a stranger he just bought cocaine from. He is too scared to talk to London and spends most of the party drinking and doing drugs in the bathroom while having conversations with those who come to visit him. The film is interspersed with flashbacks of Syd’s and London’s relationship. Most involve them arguing and/or having sex.

Syd likes to fashion himself a deep thinker. He likes to argue and discuss the existence of God. He is very hard headed and can never admit his weaknesses. London best describes it as his, “pseudo intellectual bullshit.” Bateman, his drug connection, spends a great amount of time with him in the bathroom and eventually acts as Syd’s therapist. Bateman reveals issues in his life and it helps to put Syd’s problems into perspective. After all of Syd’s supposedly deep thoughts, Bateman breaks it all down to a few simple pieces of advice. “Personally, I'd much rather regret something I'd done rather than something I was too afraid to do.” And my personal favorite, “Life’s too short to be a pussy.”

The cast is a revelation. Evans, as the drug addled, lovelorn Syd is amazing. In all of the flashback scenes he is well quaffed and put together. In the post breakup scenes he has longer hair and is unshaven. Instead of looking thin and healthy he looks skinny and sickly. Even though Statham does get into a quick fight he is playing against type. His Bateman is a sexually neurotic mess. As far as Biels goes, I have never seen her look better. Wow! I never realized how hot she can be. Statham best describes her as, “painfully gorgeous.”

The big loss of the film is that I never cared for Syd’s and London’s relationship. I did not want them to get back together. They never got along well enough to begin with so why should I care if they make up? The best relationship in the movie is that of Syd and Bateman. These two men share deeply insecure problems with each other and grow from the experience. Their conversations are the best thing about the movie. It’s too bad this movie did not center more on them and less on the hopeless and far less interesting love affair.