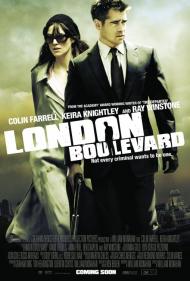 The British crime film is a genre all its own and there have been some classics. Get Carter, The Italian Job, Lock Stock and Two Smoking Barrels and Layer Cake are just some of the many great and singularly styled British gangster films that have been released over the years. London Boulevard, while it doesn't live up to any of those movies I mentioned, is definitely from a similar mold. It's a mostly entertaining film that never quite reaches the heights it should given the talent involved.

Farrell plays Mitchell, a newly released convict who'd like to stay out of jail by going straight. His old "friends" and colleagues however, have different plans and want him to come back and work for the old firm. While he goes along with them for a bit and with trepidation, he finds work on his own as a bodyguard and handyman for Charlotte (Knightley), a reclusive movie star living in London, with whom he starts having an affair.

Gant, the head of the mob Mitchell worked for, doesn't appreciate Mitchell's hesitation to rejoin his old gang and puts pressure on him to come back into the fold. He also wants Mitchell to let some of the gang break into Charlotte's home and ransack the place despite the fact that Mitchell, an ex-con, will be the prime suspect in such a crime. Given no choice and backed into a corner, Mitchell realizes his only way out of crime might involve committing more of it.

The set-up is interesting and the characters all well cast, but still somehow the movie never quite gels. Farrell is his usual charismatic, if a bit more subdued, self. You empathize with his plight and want to see him succeed. Given the tone of the film though, you're never quite sure if that's actually going to happen.

Knightley is second-billed, but actually has a very small part. We never really learn all that much about her either. She's a huge movie star with some emotional baggage and while we learn a bit of it, she never seems fully realized. Likewise, the love story between Mitchell and Charlotte is weak. You can see why they might cling to each other, but their's isn't a relationship you could really see lasting.

The supporting cast features Ray Winstone and David Thewlis in two scene stealing roles. Winstone was born to play a gangster, with his gravelly voice and menacing nature and he's perfect as the mob boss with a sadistic twist. It is Thewlis though who nearly steals the entire movie. He plays a friend/business manager of Charlotte's. He provides comic relief as the RADA trained, rather effete, but unexpectedly violent counterpoint to Farrell's Mitchell. His scenes bring some much needed color to a dark story.

I started watching this movie with pretty high expectations. With this cast and a script by the Oscar winning writer of The Departed, the pieces are certainly all in place for a classic British Crime Drama. Despite the talent involved though, the final result feels like a rough cut that needed tightening up and smoothing out. I stayed interested enough to want to know how it would turn out, but wished the journey could have been a smoother ride. 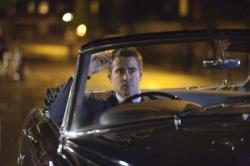 Colin Farrell has occasionally tried to stretch as an actor, but like all movie stars, he has a notable screen persona that is his bread and butter.  He plays that character here.  Mitchel is cool, edgy and dangerous.   This is how I like to think of Colin Farrell.  He has always seemed like an old fashioned movie star to me, sort of James Cagney by way of Tyrone Power.

The dialog is crisp and often witty.  At a funeral, the priest asks, "Any last words?" and Mitchell says, "Yeah, We're all fucked."   Walking from the funeral Mitchel asks his sister how she got some money and she replies, "I gave him a wank while pretending to be his mom."  A moment later he gives some honest advice to a man who is in love with his sister, "She doesn't want your love, she wants your pin number."

I thoroughly enjoyed the writing.  When Charlotte and Mitchell go to her country manor, they have a conversation where she talks about the role women play in movies, "A woman is there to get the hero to talk about himself."  However, the next couple of scenes are all about Mitchel learning about Charlotte.

I would not call the love story weak.  It never takes center stage, but it is integral to the story arc and Mitchell's development.  Charlotte shows and offers Mitchell a better life, and how he could easily be considered the good guy.  He was and is still very much a criminal by association, but when he is with Charlotte he is the knight in shining armor.

When I rented this, the man behind the counter compared it to Drive.  While Farrell and Ryan Gosling are both playing cool as hell criminals, I enjoyed this more than Drive.  I respond to dialog and interaction between actors.  Drive was minimal on lines, while London Boulevard is dialog driven.  Gosling may look cool behind the wheel, but he has nothing on Farrell driving that hot black Rolls Royce while The Yardbirds, "Heart Full of Soul" is playing.

I certainly enjoyed London Boulevard more than Scott.  When Mitchell is having dinner with Gant at a posh restaurant he says to Gant, "See, what you have to understand is if I was a gangster...Rob, you'd be the first to fucking die. I wouldn't work for you.  I'd kill you and take everything you've got...If I were a gangster."   When he asks for Jordan's help, he responds, "If I can poison a producer with his own Quaaludes, I should say I am equal to just about anything."   I agree with Scott, the journey is not a very smooth ride and it arrives at a dead end, but I would not have it any other way.