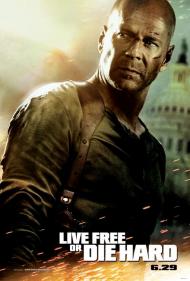 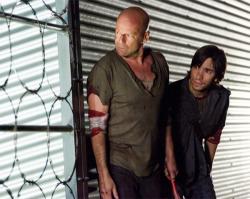 Live Free or Die Hard is a return to old school action movies. It is a rebirth of an old character. It is loud and fast. It is, most importantly, a return to what summer movies all about. This is one action packed, good time at the movies.

Willis has played in lots of different movies, like Rugrats Go Wild! and Pulp Fiction. That maybe fun for him, but he is, always has been, and always will be best when playing a tough ass cop. It worked for him in Sin City and 16 Blocks. He is to police movies what John Wayne was to the western. Willis's return as John McClane is very, very welcome.

Over the July 4th holiday, a terrorist organization hacks into all kinds of computers. They begin to shut down the entire nation. McClane is sent to pick up a hacker, Matt, who may be able to help. It turns out that he is a target of the baddies, but they didn't count on McClane being around. Whereas the hacker knows all about techno shit, McClane knows all about kicking ass. Together they face off with the army of villains.

The Die Hard films have all been successful for a reason. They are all action packed films that are able to walk that fine line between realistic tension and over-the-top action without ever falling too far in one direction. The scene where McClane destroys the helicopter is a bit much but he is all bloodied and hurt, and he has a great line when Matt says, "You just killed a helicopter with a car." McClane responds, "I was out of bullets." You find yourself cheering not jeering.

Speaking of great lines, Willis gets most of the good ones. "Mai? Asian chick, likes to kick people? Yeah, last time I saw her she was at the bottom of an elevator shaft with an SUV up her ass." Of course he gets to use his signature line when the bad guy suggests, "On your tombstone it will say always in the wrong place at the wrong time." And John suggests, "How about Yippie-ki-yay motherfucker." I do not want to spoil the scene, but you have to see it to fully appreciate that line.

Live Free or Die Hard is what summer movies are all about. Here's hoping this is not the last time I get to see Bruce Willis in a tore up bloodied T-shirt kicking some idiot's ass! 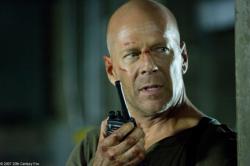 This is a fun movie, but perhaps Eric is a bit too free with his praise. The plot is completely implausible and some of the action (I'm thinking of McClane ending up on the wing of the fighter jet scene) does go over the top. However, this is a big budget summer action movie that provides plenty of popcorn moments.

There's never been a movie made that accurately portrays computer use and this one is no exception. The hackers in this movie are able to do absolutely anything they want simply by typing a few keys. No one uses Windows (or Unix or Linux or any other Operating System known to man) or a Mouse and apparently every computer in the world is freely available to hijack in a matter of seconds. And why the hell do the terrorists go to all the trouble of planting a bomb in computers, but then make the trigger a computer virus? And a computer virus that you don't have to download, but one that they can simply push to your computer.

I know, I know, you're not supposed to think about those things while watching this movie. The real purpose is to showcase John McClane kicking terrorist ass. And when the movie stays away from the techno-babble, it excels. Unlike so many movie heroes, McClane never walks away uninjured. By the end of each of his films, he's always battered, cut and bruised.

There's been a recent trend to resurrect '80s action movie icons, with Stallone redoing Rocky and Rambo and Harrison Ford donning the Fedora for one more go as Indiana Jones. I'll say this for Willis; he's certainly aged better than Stallone and Ford. Stallone still has the muscles, but in the previews to the next Rambo, he looks the corpse of Rambo, resurrected and pumped full of steroids. And Ford looks like he should be on the quest for the Holy Bottle of Geritol. Willis though, still manages to believably handle all of the action and looks as though he's still got some fight left in him. 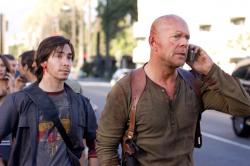 I'm with Scott on this one. Some of the action goes way over the top and the computer hacking seems ridiculously easy. Still this fourth installment in the Die Hard franchise -following Die Hard (1988), Die Hard 2 (1990), and Die Hard with a Vengeance (1995)- does provide plenty of mindless entertainment. Look for a fifth entry, A Good Day to Die Hard, out next year (2013).

John McClane is the character Willis will be most remembered for. It's his signature role and he's as good as always in the part. He's a tough-as-nails action hero who also manages to be an average guy that's easy to identify with. His interactions with Justin Long's geeky computer hacker (a role he has long been stereotyped in) are some of the movie's best moments.

The action scenes are staged and shot well even if they cross the line of believability more than once. The most famous sequence being the one Eric mentioned where McClane uses a car to destroy a helicopter. The producers and director wanted to use a minimum of CGI effects. They used cranes and wires to suspend the helicopter while they propelled the car into it. The only CGI used in the shot consist of flying debris and the moving rotor blades.

Willis worked out fanatically to get in shape for this movie and, as Scott said, he pulls it off. He was 52 when it hit theaters in 2007. Now it will be interesting to see just how he pulls off the role again with another 5 years worth of water under the bridge. They were already poking fun at his age in this one so I can only imagine it will be an even bigger issue in the upcoming flick.

The scene where Justin Long's Matt makes fun of McClane's taste in music is cute and worth quoting. As McClane blasts Creedence Clearwater Revival on his car stereo Matt says, “When was the last time you remember turning on the radio and listening to popular music? Or, just give me a decade. The 70's? I'm guessing - was, was Michael Jackson still black? Pearl Jam - I'll go back ten years with you. Ten years - 20 years, The Cure? Nothing?”

This movie, like all the others in the franchise, succeeds on the shoulders of Bruce Willis. As long as he can believably play John McClane as an ass kicking action hero this movie series will never die. 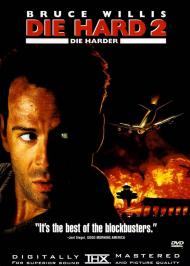 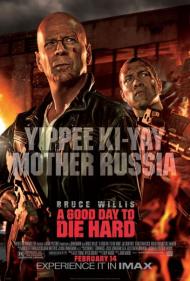