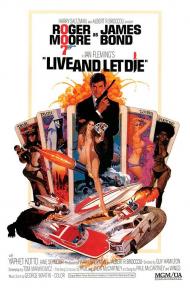 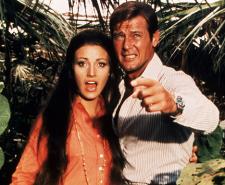 This movie represents everything that was wrong with the Bond films of the 1970s.

Live and Let Die is Roger Moore's first appearance as 007. It is also one of the worst Bond movies in the entire franchise. To be fair, this isn't really Moore's fault, for large chunks of the film he's a non-entity, particularly in the long boat chase. The movie is too long, too jokey, and just plain stupid in parts. If you compare this movie to From Russia with Love, it's hard to believe they're even in the same series.

I've never been a Roger Moore as Bond fan, but I was determined to watch this with an open mind and try to see some positives in it. I could only come up with two things. One is the fact that the villain's plot this time doesn't involve S.P.E.C.T.R.E., and doesn't involve holding the world for ransom. Kananga's big scheme is to simply take over the heroin trade in the USA. The other thing I enjoyed was the funky 70s soundtrack, which is integrated well into the movie. Some of the early Bonds hadn't figured out how to mix music into the movie and usually just ended up blaring the Bond theme at odd moments. Not here though.

Other than that the move is a slapstick mess. It's just a series of set piece and chase scenes with very little plot connecting them. The worst scene in the whole movie is a 20 minute long boat chase where a Southern Sheriff named J.W. Pepper (who's straight out of stereotypes 101) has a bigger part than Bond. Bond is shown every few minutes driving his boat, but most of the chase involves this idiot sheriff crashing cars and making stupid comments. The fact that this chase begins by Bond escaping from a swamp by running across a line of crocodile's backs is just another spit in the face to fans of the real James Bond. They could have accomplished two things by cutting this chase out. It would have shortened this movie and helped Bond maintain some of his dignity.

Moore isn't given much chance to show his charms, but when he does he comes across as rather effete and far too delicate to be an action hero. He is actually two years older than Sean Connery, which seems pretty stupid. If you're going to recast the central role, why not go for a younger actor. Although, that's a mistake that hurts the later Moore films more as he actually looks younger than Connery here. He is so effeminate at times though, that if he wasn't sleeping with so many women you'd think he was gay. I mean whose idea was it to have him smoke a long brown cigar in a couple of scenes when all of the villains in the movie are black?

Even the Bond girl is a disappointment. Jane Seymour, making her debut here, is attractive enough; quite beautiful actually, but her character is a complete wuss. It's funny that ten years after the first Bond movie, this Bond girl is less liberated than the first one.

I know that not all of Roger Moore's movies are as bad as this one, and to some, although I can hardly believe it, Moore is their favorite Bond. As a Sean Connery fan and a fan of the Ian Fleming novels, to me this movie represents everything that was wrong with the Bond films of the 1970s. 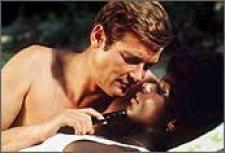 Bond tries to impress Rosie with his little gun.

Live and Let Die is the most unique James Bond film in the series. Most of the movie does not resemble anything that we had come to know of Bond, or anything we would ever see again. Instead of exotic European locales we have Harlem. The well dressed, well groomed, British accented Bond is out of his comfort zone in a dirty, dilapidated New York alley.

The movie has almost an all black cast. They call Bond a honky at one point. In some ways, this movie is quite racist. First thing to note is that every black person in it is a criminal. Except of course for the very light skinned CIA guy. Most of the black folks believe in voodoo and whenever someone is scared they go bug eyed, like in some old silent film. The funniest and perhaps most offensive line is when a black cab driver says to Bonds offer of a $20 tip, “For $20 I’d take you to a Klu Klux Klan cook out.”

As Scott wrote, the southern sheriff is an annoying cliche. With his hill billy accent and fat belly, he might as well walked off the set of The Dukes of Hazard. I cringed every time he called someone, “boy.”

The other annoying oddity about Live and Let Die is that it involves the supernatural. Solitaire has the ability to actually know what James is doing just by turning over a tarot card. That is until she loses her virginity to Bond, which is yet another first and only for him.

Although the screenplay was written by an American, Tom Mankiewicz, we can possibly credit England for helping to bring the subject of racial and ethnic diversity to the American mainstream. The same year the British produced Live and Let Die was showing in theaters, televisions most famous bigot, Archie Bunker, was enjoying his third season on All in the Family. It was based on a British sitcom.

Roger Moore is the Bond of my childhood and while he will never supplant Sean Connery as the definitive 007, he certainly had his charms in the role. First of all he was smart enough to not try and imitate Connery. He brings his own persona to the suave super agent. He has a constant twinkle in his eye and a sly smirk on his face. Unlike Connery, no matter how dire the situation he finds himself in, you never see Moore’s Bond sweat. I chuckled when he unzipped the woman’s dress using his watch magnet.

One requisite for any Bond, and one that Moore took to a higher level even than Connery, is the ability to toss off a flippant one-liner after a bad guy dies. My favorite one here comes after a man is blown up like a balloon until he explodes. Bond casually remarks, “He had an inflated sense of himself.”

Scott, I know you aren’t in the least homophobic but your review smacks of it (although I did laugh at your line about him smoking those “long brown cigars”). I never got the impression that Moore’s Bond was gay in this movie. What you call effeminate I think of as just being very proper and British. Actually though I think it would be cool to have a gay or bisexual Bond.

I too enjoyed the funky soundtrack and seeing Bond in that alley in Harlem was interesting. Like all of the Bond movies this one is certainly a time capsule of its era. Check out those cars! This was back when they were still made out of steel and produced in Detroit, Michigan.

I also found the multiracial cast to be refreshing. The blaxploitation movie was at its peak in 1973 so why not have James Bond get in on the action? Gloria Hendry is a foxy Bond girl. It’s too bad she gets killed early on as she is much more interesting than the very young and very bland Jane Seymour as the tarot card reading chick. Geoffrey Holder of those Seven Up commercials is suitably over the top as the voodoo practicing Baron Semedi. He did his own choreography and makes one strange villain.

The redneck sheriff does nearly ruin what was, up until his appearance, an enjoyable Bond movie. As Eric said it is suddenly like being stuck in an old Dukes of Hazard episode and it seems to drag on and on. Otherwise I actually liked Live and Let Die. I certainly appreciated Roger Moore as Bond, James Bond more than I ever have before. I even bought the running across the crocodile backs scene as it fits with the lighthearted and over-the-top mood of Moore’s Bond movies. And the theme song by Paul McCartney Kicks ass!