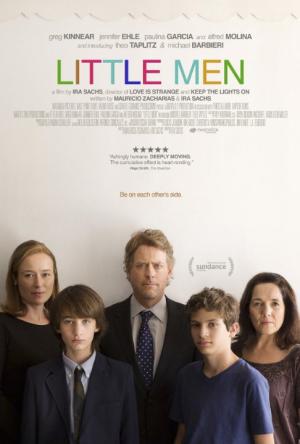 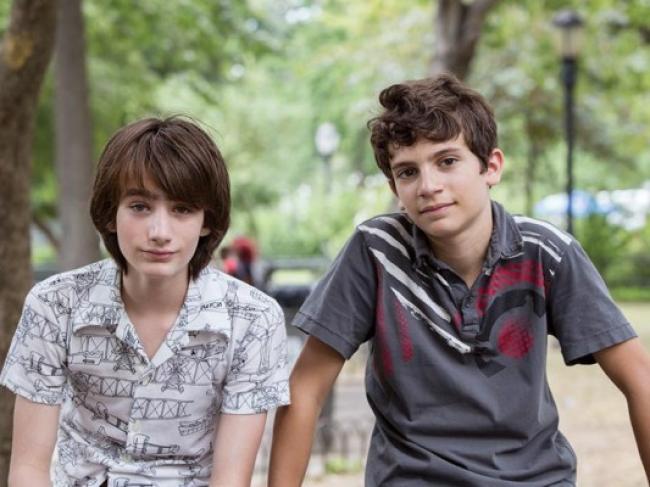 Set against the backdrop of modern day gentrified Brooklyn, Little Men is the latest low key drama from writer/director Ira Sachs. Greg Kinnear plays Brian, a struggling actor who inherits an apartment building in Brooklyn when his father dies. He moves in along with his wife Kathy (Jennifer Ehle) and thirteen year old son Jake (Theo Taplitz). They have one tenant, a woman named Leonor (Pauline Garcia) who runs a dress shop. She was very close to Brian's father and he charged her a very low rent.

When Brian and Kathy discover this, they face the difficult decision of having to triple Leonor's rent (which is still below market value in a neighborhood growing ever more expensive) even as their introverted son finally makes a friend in Leonor's gregarious son Tony (a scene stealing Michael Barbieri in his film debut). Can Jake and Tony's friendship survive despite the growing tension between Jake's parents and Tony's mother?

The entire cast does excellent work but it is the two young actors who impress the most. Theo Taplitz's Jake is easy to relate to. Most of us either were like Jake or knew someone like him in school. He's a shy yet intelligent kid who seems to live in his own imagination. As good as Theo is, however, Michael Barbieri is the film's true find as Tony. His best scene is in acting class where he goes toe-to-toe with the instructor in one extended take.

Jake and Tony become friends as only boys of that age can, immediately spending every free moment together and quickly developing their own language and interests. Jake paints and sketches, and Tony is an aspiring actor. They make plans to attend LaGuardia High School together to pursue their artistic ambitions. When a bunch of local boys make fun of Jake's sexuality, Tony sticks up for him and gets a black eye for his troubles. I like it that the script never spells out the fact that Jake is gay, but simply implies it in subtle ways that ring completely true.

Meanwhile the rent issue is becoming a bigger and bigger problem. Finally it all comes to a head when Tony tells Jake the truth, that his parents are evicting Tony's mother. If you want to know how everything plays out you'll have to see the movie. Ira Sachs has delivered another solid character drama.