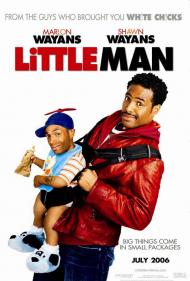 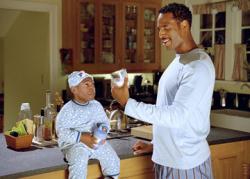 Even though I went into Little Man with very little expectations, I still walked out after the movie feeling disappointed. I've always been somewhat of a fan of the Wayans brothers movies. The first two Scary Movies were the best of the series and even the less successful Don't Be a Menace to South Central While Drinking Your Juice in the Hood was funny. While most of their jokes are juvenile and not all of them work, they usually throw enough of them at you that you never have to wait too long to find something funny. With Little Man however, although there are a few funny moments, they are scattered throughout with looooong gaps in between.

The premise of the story is really only a one-joke premise. Marlon Wayans stars as Calvin, a midget criminal. Marlon's face has been super-imposed via CGI onto the body of a midget or a small child, I'm not sure which and I'm not motivated enough to find out which it is. Most of the time it looks fine, but there are a few times where you can obviously tell that he's been gumped. Lord of the Rings did a much better job at making the hobbits look small than this movie ever does with Calvin. Since this one joke has been played out in just the previews, the concept has lost its humor before you even actually watch the movie.

When a diamond robbery of Calvin's goes awry, he is forced to dump the diamond he has stolen in the purse of a woman in a grocery store. Calvin and his idiot partner (Tracy Morgan) follow the woman home, they decide for some reason that the best way to get the diamond back is for Calvin to pretend to be a baby left on the doorstep as a means of getting into the house.

The couple who take Calvin in are played by Kerry Washington and Shawn Wayans. Kerry is Vanessa, a career driven woman who wants to put off having kids, while Shawn is Darryl, the husband who wants to have kids right away. He sees the arrival of Calvin as a means of inducing Vanessa into wanting to have a child of their own.

One of the problems with this movie is that it tries to stay balanced in the real world while still including completely unbelievable elements. If it was a completely outrageous spoof I might have been able to accept that Vanessa and Darryl believed Calvin was a baby, but since they are presented as real people with real problems, it's ludicrous to believe that they are convinced Calvin is a baby, despite his man sized penis, dental work, knife scar and tattoo. Even the pediatrician they take him too believes that he's a baby. Only Vanessa's dad, who also lives with them, is suspicious and perhaps not coincidentally, the scenes between him and Calvin are some of the movie's funniest.

In addition to the unbelievability of the setup, the movie relies too heavily on hit in the crotch humor. If you played a drinking game while watching this movie that involved taking a drink every time this happens, you'd be completely hammered by the end of the movie.

When a movie that you expected so little from delivers even less, you know it's a bad movie. With Little Man, I'm not sure it's possible to have expectations low enough to ever be pleasantly surprised. 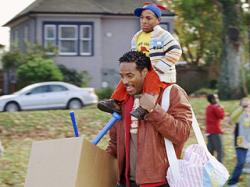 Although it is credited as being written by Keenen Ivory, Shawn and Marlon Wayans, the plot for Little Man was actually written by Michael Maltese more than 50 years ago. It was for a short animated film made in 1954 called Baby Bugs Bunny. Yes, Little Man is a remake of a Bugs Bunny cartoon and, for some reason, the Wayans do not even give Maltese a nod in the writing credits.

Both movies involve a tattooed, adult midget disguising himself as a baby to get hold of the loot that their ignorant care giver has. Here it is a giant diamond. In Baby Bugs Bunny it is a bag of money. Little Man even steals one scene completely from Bugs. It is the scene where the man/baby beats the crap out of someone every time they turn the light off but lay innocently back down when they turn the lights back on. In both movies the villain gets caught by the person turning off the light saying “click” instead of actually hitting the light switch.

Other than noticing how much the Wayans ripped off Bugs Bunny, I found little to like about Little Man. The midget has sex with this man's wife and they still end up friends? A hockey player stomps the crap out of a baby. At least he thinks it's a baby. Either way, most scenes never caused me to laugh, they just caused me to wonder what the hell were these people thinking when they wrote this. At least when Bugs goes about beating up the baby, in his charge, he is fully aware that it is an adult who has it coming.