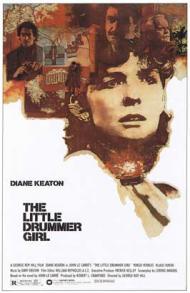 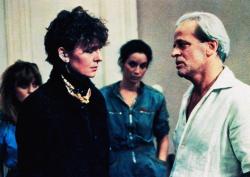 Diane Keaton and Klaus Kinski in The Little Drummer Girl.

I find that when a movie is based upon a book that it's generally better to see the movie before reading it. If the book is read first, the movie is almost invariably a disappointment. Either too much is cut out, or the writers change something, or, as is the case with this movie, an inappropriate actor is cast in a lead role. Normally, one bad casting decision can't ruin a movie, and it doesn't completely destroy this one, but it comes very close.

Diane Keaton was in her late thirties--and looks it--when she made this movie, while in the book her character, Charlie, is in her early twenties. It seems like a small change, but it makes a world of difference.

Charlie, in the book, is a young girl from a middle class background, working as an actress on the fringe of the theater world. She's insecure, lying about her past to make her life sound more traumatic, and flirting with leftist political causes, but more for the bohemian air she believes this gives her than because she truly believes in anything. She sleeps around with many men and her current boyfriend, when the book begins, abuses her physically and emotionally. This is in many ways, her coming-of-age story.

The film version of Charlie is a much more forceful character, or at least seems that way because of her age and because of the baggage Keaton brings to the part. Her background is still the same, despite being transferred from England to America, but at nearly forty, a woman (or a man), is much less affected by their parents or their upbringing than someone still in their early twenties. Charlie also seems much more confident and successful here. Her abusive boyfriend is gone from the story and is played instead by a youngish and very harmless looking Bill Nighy without any hints of a sexual relationship. And lastly, Keaton just isn't sexy enough for this part, which requires, not necessarily great beauty, but a strong feminine sexuality, which Keaton doesn't possess and she's certainly not helped by a horrendous 1980s style haircut that looks like a cross between a perm and a mullet.

John Le Carre, who wrote the book this film is based on, is most famous for his Cold War novels, but the plot of this film doesn't feature the Russians at all. Instead it focuses on Israel and Palestine. The story opens with a bombing in Germany at an Israeli diplomat's house, where the diplomat, his wife and his young son are all killed. An Israeli investigation into the bombing points to a terrorist known as Khalil. Khalil has a brother, Michel, who is known to be a a playboy. He recruits young women to deliver his bombs for him. The Israeli intelligence service decides to plant an attractive female agent into this organization in the hopes that she will lead them all the way up to Khalil. Since a Jewish girl would be unlikely to succeed, they decide to recruit an outsider, choosing Charlie as their agent because of her acting ability and because of her political background, which lends her credence. To bring Charlie around to their side, they send in Joseph, an experienced agent, to romance her, hoping her feelings for him will make her sympathetic towards their cause.

When the book was published in 1983, it reportedly offended both Israelis and Palestinians. Both sides felt that they were shown in a bad light. What Le Carre did in the book, and to a lesser extent in the movie, is what he has always been so good at, which is showing things in shades of grey. In truth he shows neither side as being evil, but shows both of them doing evil, or at least immoral things in the name of their beliefs and causes. Again, as is common in Le Carre's work, Charlie is a central figure, caught between two different philosophies, facing the human cost of trying to protect and advance those causes. The Israelis are ultimately cast as the "good guys", but as Le Carre wrote in his most classic novel, "The Spy Who Came in from the Cold", "You can't be less ruthless than the opposition simply because your government's policy is benevolent, can you now?"

Although I said I wished I had seen the film version before reading the book, I do wonder how easily I would have followed the plot of the film, if I hadn't read it. Even at over 2 hours, many things have been condensed or removed from the story. It moves through events pretty quickly and expects you to pay close attention. I'd be interested to hear the opinion of someone less familiar with the story.

There have been many great film adaptations of Le Carre's work. There have also been some great films starring Diane Keaton. Combining the two however, at least for this movie, is a recipe for near disaster. The story is strong enough that by the end I was still caught up in it, but it's such a wasted opportunity. In the hands of the right actress, this could be a phenomenal part. 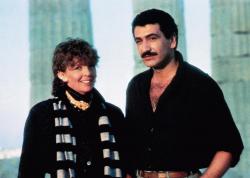 Diane Keaton and Yorgo Voyagis in The Little Drummer Girl.

Scott, I was completely unfamiliar with the story of The Little Drummer Girl before watching it. I have to say it was a bit difficult to follow every plot twist and turn, what with all the double-agents and false identities being bandied about. And I agree that Diane Keaton was horribly miscast. She's definitely too old and not nearly sexy enough to be Charlie. And the movie has an uneven feel to it. At times it's deadly serious but then it suddenly adopts a more lighthearted tone that seems out of place given the subject matter.

I've never been a student of the Middle-East but to me the story seems to paint a fair portrait of both sides of the Israeli/Palestinian conflict. At least in the sense that neither side is shown to have moral superiority. If anyone comes off looking bad it's Charlie, and by extension American women. Charlie starts off pro-Palestine but then becomes a double-agent for the Israelis. She has no real convictions and fits the stereotype of the irrational female who follows her heart over her intellect. Her behavior makes much more sense for a woman in her early 20s than one in her late 30s, as Keaton so clearly is.

Watching this movie made me realize just how much the face of terrorism has changed in the thirty years since it came out. In light of the modern world, where American born citizens have joined with Islamic extremists in their jihad against western civilization, it left a bad taste in my mouth watching Charlie going through terrorist boot camp. And she's played by Annie -fucking- Hall for god's sake! The scene where she plants a car bomb and then walks calmly away while counting down the timer in her head is a bit surreal. She acts more like a tourist on a lark than a terrorist in training.

What The Little Drummer Girl does have going for it is solid direction by George Roy Hill. He knows how to stage and shoot tense and exciting action scenes. Keaton's best moment is when she's getting hysterical during the intense climax where she ends up with a blood splattered face. Still, overall I didn't enjoy The Little Drummer Girl enough to recommend it. Charlie really needed to be played by a younger actress. At Keaton's age a woman shouldn't be as gullible or as easy to manipulate as Charlie is written. It makes her seem emotionally stunted and almost pathetic at times. I'm normally a fan of Diane Keaton but this is one case where miscasting completely ruined what could have been a potentially decent movie.