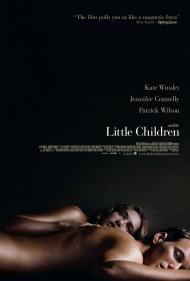 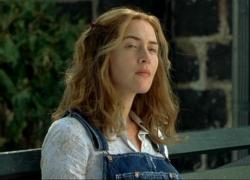 The movie takes place over one summer in a suburban neighborhood in Massachusetts. Kate Winslett is Sarah, a stay at home mom bored with her life. When one day she meets Brad (Wilson) at the park, a spark is ignited that she hasn't felt in a long time. Brad is a stay at home dad supposedly studying for the Bar Exam. He's married to Kathy (Connelly) who supports her husband and their son with her job making documentaries. Sarah's husband works in advertising and is away a great deal. Sarah tries to fill her life with her daughter and book clubs, but is seriously feeling unfulfilled. At first Brad and Sarah strike up just a friendship, but it's obvious to them and the audience that their relationship won't stay platonic for long.

Adding conflict is the presence of Ronnie (Haley), who has returned from prison for exposing himself to small children. As a sexual predator his whereabouts have been announced to his neighbors who respond with horror and revulsion. Ronnie lives with his mother who seems to be the only person on the planet capable of loving him.

While the title of this movie is Little Children and there are many children in the movie, it is not the kids that the title is referring to. The real children in this movie are the grown-ups and the theme of the movie is about growing up and taking responsibility for the children. At the beginning, the children are the last things on the lead character's minds. Sarah is looking for excitement that her role as mother can't bring. Brad feels seriously emasculated by his role and longs for his youth. He searches for it in the skateboarding kids in the neighborhood and on the football field and eventually in Sarah's arms. Ronnie of course has the least interest in children's welfare. All of them must learn a lesson and the final resolution is emotionally satisfying in a way that too many movies aren't. This is adult entertainment at its finest.

Although Connelly is given equal screentime in the previews and press for this movie, she is merely a supporting character. This is Winslett and Wilson's movie. Both of them, but especially Winslett deserve to be nominated for their roles. Haley, as Ronnie, could also snag one for supporting actor. In case you don't recognize the name, Haley is most famous for playing Kelly Leek in the old Bad News Bears movies. He's come a long way from the baseball diamond of his youth.

If you're looking for human drama filled with emotional nuances and real depth, Little Children is definitely the movie for you. Don't be surprised if this movie becomes the movie to see come Award Season. 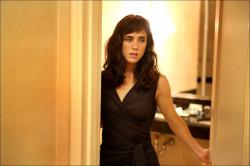 When I read the book years ago, I recall thinking that Little Children would make a great movie. It has plenty of sex, suspense and plot. I was quite excited to see the film but, for some reason, the movie never got a wide release. Because of which, I had to wait for it to come out on DVD to see it.

The novel, written by Tom Perrotta, not only showed adults acting as children but asked the question of who are any of us to judge someone else, and what is right and what is wrong. No one in the story is without some moral issue. Brad and Sarah have an affair. Larry accidentally shot a kid. Sarah's husband gets off on internet porn. Brad's wife is controlling. The interesting thing is that everyone turns a blind eye to them. Even when Sarah discovers Brad's affair she does nothing other than having her mother step in as a chaperone. It is only the pedophile with whom everyone feels comfortable railing against.

Perrotta, who wrote the novel for another much overlooked great movie, Election, writes about the human ego better than any author I have yet to read. Through Little Children and Election, we see just how fragile and needy our self esteem is, and how much trouble it can get us into. 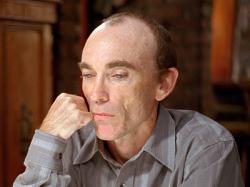 Todd Field is easily one of the most talented writer/directors working today. His camera movement and visual style are elegantly old-fashioned, as is his use of voice-over narration. His subject matter, on the other hand, is very 21st Century. It is a winning combination.

Like he did with In the Bedroom, Field tells a rather simple story about average suburbanites. He does so with a methodical pace but still manages to make the story compelling. I agree with Scott about the ending. It is very good. It somehow manages to be both tragic and uplifting at the same time.

For those like me who never got around to seeing this movie last award season, trust me, it is a welcome relief from the mindless eye candy currently populating Cineplex's. Jackie Earle Haley was robbed of the Oscar. He gives a great, great performance as Ronnie.