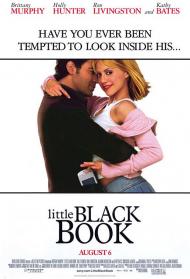 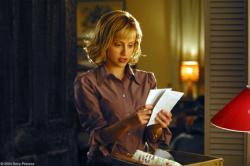 If Little Black Book has one redeeming feature, it is the likeability of its star, Brittany Murphy. The plot is just another woman needs a man to be happy story. The humor is fairly lame and most of the characters are stereotypes and caricatures. It might please a portion of its target audience – single young women – but probably not even many of them.

Murphy stars as Stacy Holt, an associate producer on a Jerry Springer type show. A fellow producer pitches an idea for the show about women investigating their boyfriend's past relationships by going through their boyfriend's little black books. Around this time, Stacy's boyfriend Derek (Livingstone) goes out of town on business and conveniently forgets to take his Palm Pilot. At the urging of her friends, Stacy goes through the Pilot and begins to learn about Derek's past girlfriends, many of whom he has secretly remained in contact with. Jokes fail to ensue from this setup.

For a movie marketed as a romantic comedy, this movie is totally devoid of romance. Livingstone is completely one-dimensional as the sports agent boyfriend who fails to create any sort of chemistry during his limited screen time, although it is the writers rather than the actors who are to blame. The scenes between Stacy and Derek are limited to a few kisses and several phone calls, which only serve to advance the plot and not add any depth to their relationship.

The plot line involving the sleazy talk show seems promising at first. Surely there are plenty of jokes that could be made by satirizing daytime television, especially when someone as talented as Kathy Bates is playing the host. This turns out to be another idea that never gets off the ground and Bates ends up wasted in a throwaway part that could have been played by anyone.

Only Murphy, with her quirky cuteness, manages to breathe life into her character. However, even her cute likeability isn't enough to resuscitate this lifeless film. What few heartbeats there are however, are entirely due to her.

Several times during the movie, the characters invoke the memory of the Melanie Griffith/Harrison Ford movie, Working Girl. Perhaps the filmmakers hoped that some of the success of that film would rub off on this one. Instead, the constant references to a good movie, only serve to remind us how bad the one we're watching is. 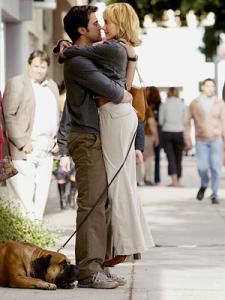 They may look in love, but what do we know?

Romantic comedies are supposed to be predictable. They are mindless, romantic comfort food. Two attractive people meet, have some issues and then live happily-ever-after. They give hope to all who are struggling for, or struggling in, a relationship. Who can’t relate to those films?

Having just watched, and thoroughly enjoyed Office Space, I thought I could certainly watch another Ron Livingston movie. Unfortunately, as Scott mentioned, he is in very little of the movie, leaving Murphy to carry it. Unlike Scott, I never found her charming. Anyone from Anna Faris to Ashley Judd could have pulled this off better.

The biggest flaw in this movie is the ending, when all of the principle characters are gathered on a sound stage for the talk show. Why any of them stick around to discuss their personal life is beyond me? Murphy tells Livingston that he is better off with one of his previous girlfriends. In a real romantic comedy, he would have responded that although his other girlfriends had some good qualities, she has more, and then they would have ended up in each others arms and the world would continue to spin. Instead, they break up. The End. Except for that ridiculous scene with Carly Simon. 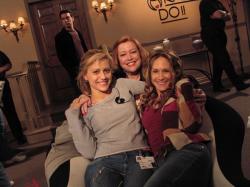 Little Black Book is an entirely unsatisfying attempt to mix romantic comedy with television satire that completely misses the target on both counts. As my brothers already said there isn't a whiff of romance in the script between Stacy and Derek. Murphy and Livingston rarely even appear in the same scenes. And these characters are poorly written and unlikable.

Stacy is so desperate and insecure that (sorry Scott) not even cute-as-a-button Brittany Murphy can make this pathetic chick likable. But at least she has a personality, which is more than can be said of Derek. Poor Ron Livingston never stood a chance portraying one of the dullest characters ever put on film. I never understood what any of the women in the movie saw in him. Apparently he's only witty and debonair when he's not in a scene.

I agree with Scott that the television parody angle never really gets off the ground either, which is a shame because it had the most potential. In fact the only way this movie could have worked is if they had dropped the romance angle entirely and made it all about The Kippie Kann Show. Instead it is just the impetus that sends Stacy on her quest, but then, like Derek, it slips unnoticed into the background and doesn't show up again until the big reveal scene. A scene that is perhaps the worst written scene in a movie filled with bad writing. As Eric said, the ending is terrible.

Perhaps worst of all though is the way the script so blithely wastes the talents of both Kathy Bates and Holly Hunter. I guess even Oscar winners have to eat but both women deserve much better than this unfunny mess.

At the end of the movie we get Stacy's big epiphany about life that has all the depth of a greeting card platitude. “Perhaps luck exists somewhere between the world of planning, the world of chance, and the peace that comes from knowing that you just can't know it all.” One thing I do know for sure is that Little Black Book sucks.