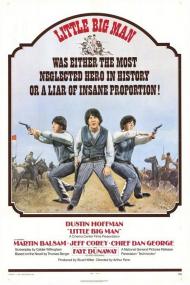 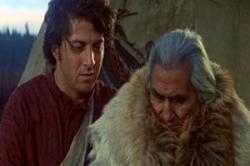 Little Big Man was one of my favorite movies as a kid. I enjoyed the humor and Dustin Hoffman's performance. I even went through a minor Western phase for a while after watching it, but the 1970s were the decade that killed the Western and so it didn't last long.

It was also one of the movies that taught me that when a movie is based on a book, the movie is always going to be inferior. As much as I enjoyed the movie, the book was a true classic. A recent rereading of it proved to me that it really is an American classic and it also lead to a rewatching of the film, which, sadly, hasn't aged as well as the book, being dated, not by its Western setting, but by its 1970s revisionist attitudes.

Hoffman plays Jack Crabb, a 111 year old survivor of the Battle of Little Big Horn. He narrates the story of his life up until the fateful battle. His family's wagon train is attacked when he was just a boy and through a misunderstanding is adopted by a Cheyenne tribe. After five years with them, he is taken back into the white man's world where as he grows up he experiences nearly all aspects of Western life, with the occasional return to his Indian family. He encounters General Custer as both an Indian and a white man, eventually accompanying Custer to his infamous last stand.

I could write an entire review that just compared the many differences between the book and the movie, but I won't. I'll just say that the book, while still comical, is much more serious in tone and in theme. It is also, much, much more subtle in its message. In the book, Jack is very much a 19th century Forrest Gump, appearing at many historical events and meeting several very famous Western  personages, like Custer, Hickock, Earp and Carson. In the film, Jack knows Custer and briefly meets Hickock, but that's about it, apart from a glimpse of Buffalo Bill. The theme of the book is similar to Huckleberry Finn, in that Jack learns to love and respect, against all of his instinct and upbringing, the Indians, in much the same way that Huck learned to love Jim. The theme of the movie is basically, White Men bad and Indians good and this theme is delivered with a sledge hammer. It's obviously influenced by the era and the Vietnam War and it's not afraid to alter historical facts and incidents to make this point.

When the movie is played for laughs it is at its best. Jack's brief tenure as a gunfighter is probably the film's funniest portion. Its most successful dramatic moment comes during the Battle of the Washita River when Custer attacks the Indian Village where Jack is living. It's one of the best and most emotional scenes in the film, combining humor as Jack tries to lead his blind Indian Grandfather out of the village and drama as we watch Jack's Indian wife and baby try to escape from the soldiers. The tension of the scene is only undercut by the fact that historically the film gets several things wrong in its efforts to make the military look like butchers and Custer a psychopath.

Reportedly the part of Old Lodge Skins (Jack's Indian Grandfather) was offered to both Marlon Brando and Laurence Olivier, but both turned it down, which is lucky for the film and for Chief Dan George who eventually got the part and a well deserved Oscar Nomination for it. He steals most of the scenes he's in and brings a sense of authenticity to the role that really helps sell the film in a way that having a Caucasian actor in the part wouldn't have done.

While it didn't live up to my childhood memory of it, I did still enjoy Little Big Man. Hoffman is terrific in the lead and the humor still stands the test of time. It certainly never approaches the level of the book however, which deserves far more recognition than it has received. 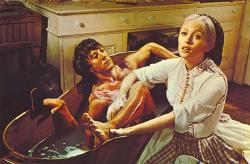 Faye Dunaway gives Dustin Hoffman a lecture on avoiding temptation as she bathes him, in Little Big Man

Scott's description that, "Jack is very much a 19th century Forrest Gump." is spot on.  Jack seemed to live the full range of the western experience.  From wagon trains, to fighting Indians, to gun fighter, to the stereotypical drunk, to mountain man, Jack covers most of the Hollywood western cliches.

I also had fond memories of this film.  I once found such lines as, "Invisible! I've never been invisible before!" to be laugh out loud funny.  Now as I watched from an adult perspective I found little humor in that line as so much death is going on at the same time.

I also remember Jack's homely sister Caroline to be worth a few laughs.  Her instructions to Jack to go, "snake eyes"  when teaching him to shoot, was a line my older brother and I repeated to each other many times after wards.  This time I laughed hardest when she, not so secretly, hoped the Indians would rape her and Jack narrates that she never did have much luck with men.

I agree that the white man bad/Indian good theme gets a bit weary.  Lines like, "There is an endless supply of white men. There has always been a limited number of human beings."  In and of itself is funny but the film beats this message to the point of exhaustion.   Old Lodge Skin and Indian spirituality is treated with reverence, while the white Christians are hysterical, Bible thumping hypocrites.  Jack's Indian wife is strong and loving while his white wife becomes a shrew.

Upon it's release,  Little Big Man helped spurn a movement in support of the American Indian.  Billy Jack was released the following year, which features a hero who lives on an Indian reservation, fights white men and follows Indian religion.  In 1973 an Indian girl named Sasheen Littlefeather accepted/declined Marlon Brando's Best Actor Oscar for The Godfather, by giving a speech about the treatment of American Indians in movies.  Later in the broadcast, when presenting the Best Picture Award, Clint Eastwood asked if it should be presented "on behalf of all the cowboys shot in John Ford westerns over the years."

I never noticed the political bias when I watched Little Big Man as a child.  Now that I recognize it, the film becomes a bit dated.  If you want to stretch it a bit you could even make the argument that this is an anti-Vietnam War movie showing the imperialist American Army going into foreign lands to kill people who never attacked them.  A big rally cry for Vietnam protestors was American soldiers as "baby killers."  In Little Big Man, American soldiers are shown slaughtering helpless women and children.

I still found some funny moments here to enjoy, but the political message was now a bit off putting.  In one sense, it did not live up to my memory of it, but it was now a completely new film for me as I had never caught on to the heavy handed evil white man theme before. 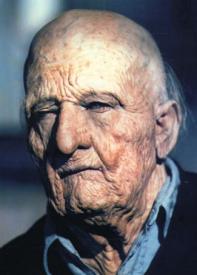 The fact that the movie skews towards the perspective of the Indian is not a flaw. It works artistically because these are Jack Crabb’s personal memories (it’s not a documentary about the Old West) and he identifies as an Indian more than as a white. If you notice his story begins after the death of his white parents. Symbolically he has no recollections of his life before being adopted by the Human Beings. He is raised by Old Lodge Skins and taught the ways of the Indian.

Every time he returns to the white world he soon realizes he doesn’t fit in. The beliefs and attitudes of the Red Man make more sense to him. Is his point of view towards the White Man any different than what your average 19th Century Shawnee warrior's would have been? I don’t think so. And it’s not as if all of the atrocities depicted didn’t actually happen at one time or another during the genocide of the Native American peoples.

Besides that the movie is beautifully shot, features some inspired acting and is funny as hell. I agree wholeheartedly with the Forrest Gump comparison and like both my brothers I have fond memories of watching this as a kid. I remember us all cracking up at the “Going Snake Eyes” scene.

Although neither of my brothers mentioned him, I always liked the fact that this movie features a gay Indian and that he is accepted by his tribe and that he forms a friendship with Little Big Man. Unlike the white Christians the Indians understood that he was being his natural self and was not some twisted pervert to be shunned.

The one flaw to me is the imbalance between the comedy and the drama, especially the gory scenes. One minute it is broad satire and the next someone is getting blown away by a shotgun. And it’s not the surreal Monty Python type of blood letting. This movie wants to be both a farce and an emotionally moving drama and it doesn’t always gel. Most noticeably in the scene both Scott and Eric mentioned where Little Big Man convinces Old Lodge Skins that he is invisible during a battle and then watches his wife and baby get gunned down in cold blood.

It has been years since I read the book and I can’t remember how it differed from the movie. I have no doubt that it is better in some ways. I also have no doubts that Arthur Penn had an agenda in the sense of wanting to make a statement about the historic treatment of Indians in this country and, less directly, the U.S. Military’s involvement in Vietnam. But having a social message is not – in and of itself – a flaw. It all depends on the execution and Little Big Man is done very well in my opinion.