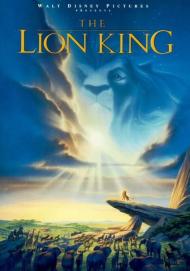 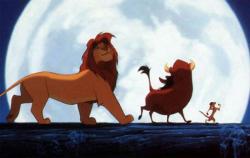 Simba, Pumbaa and Timon put their behinds in the past as they sing, Hakuna Matata in The Lion King.

I'm pretty sure that I hadn't seen this movie since it was released in 1994. At that time Walt Disney was on a roll with its traditional hand drawn animation and The Lion King was the highest grossing animated film at the time and in many ways represents the pinnacle of modern Disney's success . Pixar would release Toy Story just a year later and neither Disney nor animation would ever be the same again.

The plot is sort of an amalgam of Shakespeare's Hamlet and the Biblical stories of Moses and Joseph. It tells the story of Simba the lion. He is born to Mufasa, the Lion King. Mufasa's brother, Scar, is jealous and wants the crown for himself so he stages Mufasa's death and convinces a young Simba that the death was his fault so Simba will run away. Simba finds a life for himself with Timon and Pumba, a meerkat and warthog, until he grows up. A surprise visit from Nala, Simba's childhood friend, prompts him to return to the Pride in an attempt to remove Scar from power.

I was curious how I would react to this movie nearly 20 years later and I have to admit that my first reaction was a bit of a let down. The early scenes with young Simba seem a little too cutesy and the animals all act a little too human-like. It isn't until Mufasa's death scene that the movie really takes off and it is given a HUGE shot in the arm when Nathan Lane's Timon enters the story, bringing with him the movie's most memorable and annoyingly catchy song, "Hakuna Matata" and some much needed comic relief. From his entrance to the finale, the movie did live up to my memory and its reputation.

Curiously for a musical, the songs are one of the movie's weakest points. Apart from the aforementioned "Hakuna Matata" the rest of the songs are all eminently forgettable and wouldn't sound out of place on an elevator. The love song is "Can You Feel the Love Tonight", but as sung here comes across as weak and not all that romantic. The other famous song is the opening "Circle of Life" song, which is decent enough, but not really the kind you can sing-along to.

Some of the animation is quite beautiful, although some of it seems quite crude by today's standards. Note the mouse in the opening scene that Scar is going to eat. There are some strange color choices throughout the movie also, including the red elephants and the oddly colored giraffes during the water hole sequence.

Of the voice actors there are several stand-outs. James Earl Jones has that amazing voice of his that makes him sound like the perfect king. Jeremy Irons is also quite good as the villainous Scar, although just why one brother has an English accent is never explained. Rowan Atkinson gets a few funny lines as Zazu, the King's advisor. It is Nathan Lane though, who really steals the movie. His Timon is from Africa via Brooklyn and he gets all of the movie's funniest lines.

This isn't my favorite of Walt Disney's animated musicals. Beauty and the Beast is superior in just about every way. The Lion King is very good though and if it did signal the finale of hand drawn animation, at least it went out with a roar.

When I first saw The Lion King, back in 1994, I was of a liberal mindset.  As such, I did not pay close attention to the details of politics and just went with my feelings.  Looking at this movie now I see an entirely different film.

Mufasa is intended to appear as a benevolent leader.  The opening scenes have all the animals in the area coming to pay homage to him and the birth of his son.  The scene shows him and the mother of his son looking lovingly at each other and their son.   Mufasa is set up by the story to be a likable, good leader.

However, if you take just a moment to think about this, you realize that this is a perfect example of totalitarian rule.   Mufasa has no limits to his authority.   He controls the other animals.  The very animals he eats were forced to come to the birth announcement of his son.  Do we really think those zebras were thrilled to welcome another predator into their world?  He restricts free speech.  Note Zazu's reaction to Scar speaking disparagingly of Mufasa.   He controls the economy, which in this case is the food source.  He does not keep the hyenas away for the gnus and zebras protection, but to keep them for himself and his inner circle to eat.

He maintains his power as all totalitarian dictators do, through the use of terror and propaganda.  Everyone is scared of him.  Cross him and he comes bounding over to roar and intimidate.  Worse though, is his, "circle of life" speech.  According to Mufasa it is okay that they eat the other animals because one day he will die and his body will fertilize some grass that a gazzelle will eat, thus the circle of life.  So Mufasa killing 100 animals in his life time equals one animal eating some grass one day in the future?  According to him, yes.  Note, none of the food source animals, zebras, gnus or gazelles are ever given a single line of dialogue.

Looking at Mufasa on a personal level we also find some question marks.  Mufasa is the only male lion in the pride.  Thus all of those lionesses laying around are his harem.  Does this not make Nala, Symba's sister?

The Lion King tries to make Mufasa, and Symba for that matter, look like great leaders by showing Scar as evil.  He is meant to look vile by killing his brother, but can we not just apply Mufasa's circle of life logic to this situation?  Mufasa is now worm food.  All is well in the circle of life.  Wait, we have Symba crying over his dad's rotting corpse.  Do zebras not have feelings?  Why are we meant to feel sad for a dead animal that is responsible for the death of so many other animals that had sons and daughters?

After Scar takes over, the pride land goes to hell somehow.  He does nothing that Mufasa did not do.  He eats other animals just as Mufasa did.  Is Scar responsible for the weather turning bad?  Even if he kills a few more antelope than Mufasa did, we can just use Mufasa's logic and relax in the fact that more grass will now be fertilized.

The greatest power a government can have is to convince it's population that they are doing the right thing by them, when in fact it is the opposite.   Just like a government convincing it's citizens that it is for their own good that they take more of their money, we are meant to believe that Mufasa and Symba are some how great Kings because they consume less of their subjects than Scar.

The Circle of Life continues in The Lion King.

Boy, where to begin. Scott, I guess I agree more with your review but still find you too hard on this much beloved children’s cartoon. Yes, the animals are cutesy but when are they not in a Walt Disney movie? And you are completely wrong about the songs. They are quite memorable and have been carrying a hugely popular Broadway Musical for more than a decade now. I do agree that Nathan Lane is hilarious and steals many scenes.

I also enjoyed Ernie Saballa as the wart hog Pumbaa and Robert Guillaume as the wise but eccentric simian Rafiki. His best moment is when he kicks some hyena butt using martial arts skills. The animation is very good and visually the movie holds up just fine. I much prefer hand drawn animation to anything created by the soulless computer.

As for Eric, your review is obviously tongue-in-cheek but still inaccurate. Once you give human intelligence to animals all reality goes out the window, rendering most of your points moot. The reason the herbivores are not given dialogue is to keep the children in the audience from identifying with them. And since the lion has always been known as the King of Beasts it makes perfect sense they rule the wilds of Africa with a monarchy.

But given the actions of Mufasa and Scar there is no comparison between which is good and which is evil. Lions, by their nature, must eat the flesh of other living creatures to survive. Killing for sustenance is not at all the same as killing someone you purportedly love for power. Scar is completely despicable (and memorably voiced by Jeremy Irons). He is a coward and a backstabbing liar. The reason the Pride Lands die is because he upsets the balance of the “Circle of Life” by giving the hyena’s free reign to slaughter. Oh and how fitting Eric, that Mufasa is trampled to death by a herd of gazelles that will later eat the grass that grows from the nutrients in his body. Circle complete.

Despite what my brothers wrote, The Lion King remains a great animated children’s movie with a decent moral message, which is that you can’t run away from your problems. Like Simba, we must all eventually face our destiny.