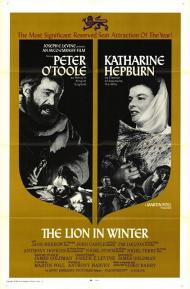 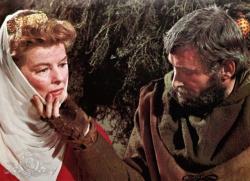 Katharine Hepburn and Peter O'Toole in The Lion in Winter.

The Lion in Winter takes place in medieval times but you will only see swords or daggers occasionally. Instead, the weapon of choice here is sarcasm. In the capable hands of this dysfunctional family, it is truly a lethal weapon. Its pretty much the only way this family knows how to communicate.

Katharine Hepburn as Queen Eleanor and Peter O'Toole as King Henry head a royal family that will stop at nothing, and I do mean nothing, to get what they want. They scheme, back stab, and betray each other countless times during a Christmas holiday. It is a fact that the people you are closest to can hurt you the worst and this film is the perfect example.

During all of the bitter rivalry for the throne, the audience is treated to some wonderful dialogue expertly delivered by the talented stars; "How nice of you to let me out of jail." Eleanor says to Henry who recently allowed her out of the tower he had her locked in. "It's only for the holiday." responds Henry. "Like school, you keep me young." Adds Eleanor. Later in the film, Eleanor, in a fit of rage, yells at Henry, "I could peel you like a pear and God himself would call it justice!"

The Lion in Winter has some controversial subject matter, incest, sodomy and patricide. But the true entertainment is watching Hepburn and O'Toole "picnicking on each other." 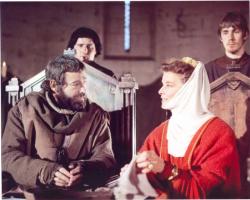 Peter O'Toole and Katharine Hepburn in The Lion in Winter.

Katharine Hepburn gives the performance of her amazing career in this movie. Traveling from cold hearted viciousness to trembling anguish while delivering her lines with a stunning clarity of feeling. She won her third Best Actress Oscar as Eleanor of Aquitaine and the film really belongs to her. Not to say that the other actors don't measure up but she has the best lines and is the closest the movie comes to a sympathetic character.

Peter O'Toole shines as King Henry II a combination majestic warrior and gruff statesman. Although 12th century England was probably never this witty, the finely nuanced characters are played with such depth that it never appears too theatrical. Likewise the castle and its surrounding grounds where this dynamic drama unfolds is refreshingly real unlike many of today's "cyber settings".

It's worth noting that Lion in Winter marks the movie debuts of both Anthony Hopkins and Timothy Dalton as King Richard the Lion-Hearted and King Philip of France respectively.

At its heart this is a film about the treachery that can lie within families and the ruthless inevitability of the aging process.

Cliché or not; a true cinematic masterpiece. 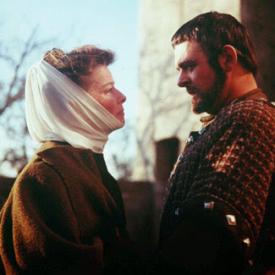 Katharine Hepburn and Anthony Hopkins in The Lion in Winter.

Let me just say up front, that I agree with my brothers completely, that this is a great movie with some of the best, if not the best dialogue ever to be spoken in a film.

But, since they both stole all of my points, I will play devil's advocate and point out some of the movie's bad points. There are only a couple.

The opening scenes of the princes being summoned to the Christmas court is one of them. They feature sword fights, and battles. These scenes were tacked onto the movie and do not appear in the original script of the play. They were added for the movie version I feel, just so the distributors would have something to show in the Previews, besides talking.

The only other scene which bothers me, is the scene right after Henry has disowned his sons and is walking along the castle ramparts. There is no dialogue, it just shows him walking and I guess the viewer is supposed to be witnessing the emotional effects of the previous scene. This is fine, but it drags on and on, just him walking. To me it is an unwelcome intrusion into the tension. It is similar in distraction to the overlong scene of Eleanor's arrival by barge in the beginning.

But those are just niggling little points and don't detract from the overall movie one bit. Anyone who thinks that intelligent movies don't get made, needs to watch this one. 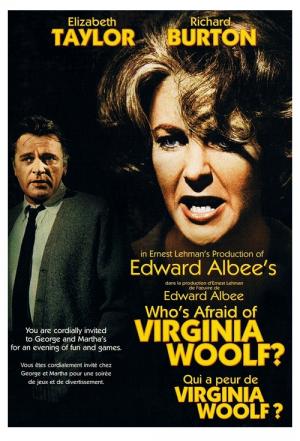