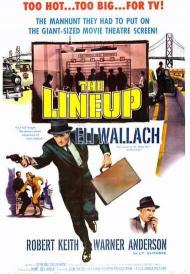 Eli Wallach in The Lineup.

This obscure film noir from the late 1950's is as hardboiled and straightforward as they come. Don Siegel directs the action with a sure hand, the screenplay by Stirling Silliphant is spare and hardboiled. There are plenty of great location shots of mid 20th Century San Francisco. Some of the dialogue is dated and elicits an unintentional chuckle or two, but this is offset by some realistic and even shocking violence and chilling testimony by the two hit men.

The movie opens with a bang-up action sequence at the sea port in San Francisco Bay. This leads a pair of detectives onto the trail of an international heroin smuggling operation. Then Dancer and Julien arrive in town to collect the smuggled drugs and the body count starts to rise. The action and sense of danger keeps climbing right up to the great ending which takes place on an unfinished elevated highway.

The cast is very good. Eli Wallach makes his psychotic killer interesting by giving him an occasional glimmer of humanity. Robert Keith (Brian's father) plays Julien, the brains of the outfit. He is constantly soothing Dancer's edgy nerves by assuring him that things are going well and that the job will soon be over. Every time Dancer kills someone Julien asks him what their last words were and then writes them down in a little black book.

Television fans will recognize Richard Jaeckel as McLain, Dancer and Julien's wheel man. And Raymond Bailey, best remembered for playing Milburn Drysdale on The Beverly Hillbillies, has a small but significant role.

I'll never fathom why modern audiences have forsaken great unheralded movies of the past like The Lineup. It is better than nearly anything playing in theaters today.