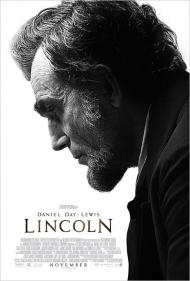 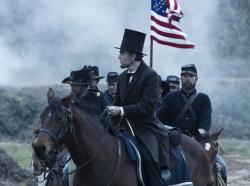 Two years ago in my review for The King's Speech I correctly predicted it would win Oscars for Picture, Actor and Screenplay. I'm going to make the same prediction this year about Lincoln. And on top of those three awards I predict wins for Supporting Actor/Actress for Tommy Lee Jones and Sally Field respectively. Not only is Lincoln a damn good movie but it has all the qualities that Academy voters have long rewarded in films. It's about America's most revered President and it deals with one of the most historically pivotal periods in our countries' history. But then when you have Steven Spielberg directing Daniel Day-Lewis as Abe Lincoln, you're already halfway to the podium come Oscar night.

Set during the closing months of the American Civil War, Lincoln shows the behind the scenes due process (scrambling for votes by means ranging from sublimely compelling arguments to old-fashioned bribery) needed for ratification of the Thirteenth Amendment which outlawed slavery in the United States. Lincoln is in a race to get it passed before peace is declared, as the ending of the war would leave the Amendment dead on the House floor.

Spielberg's incredible storytelling talents are put to good use. The subject matter isn't all that cinematically exciting but the way it unfolds is compelling. Even though we all know how the story ends there is a real sense of tension and urgency to it. And fortunately Spielberg never allows any cloying sentimentality to overpower the movie like he did with last year's overrated War Horse.

Visually Lincoln impresses. It transports the viewer back to our nation's capitol in that fateful winter and early spring of 1865. The sets and costumes are meticulously authentic looking. There is one scene near the end where we watch Lincoln's silhouette, wearing his trademark stovepipe hat as he walks away from the camera towards the door of the White House. It's a powerful image and one of those screen moments destined to become indelible in our collective movie-going consciousness.

President Woodrow Wilson famously waxed poetic after watching D.W. Griffith's The Birth of a Nation. He said it was like “writing history with lightning.” The same can be said of Lincoln. It demonstrates the power of film in bringing history to life in a way no other art form can.

And now for the cast. Everyone in the movie is terrific. David Strathairn, Tommy Lee Jones and Sally Field are all at the top of their games.

Field makes Mary Todd Lincoln a real person and not merely the spendthrift/bi-polar caricature she is usually made out to be. Her part is rather small but she makes the most of it, particularly during a heated argument with her husband.

Jones imbues Thaddeus Stevens with an implacable moral authority representing the soul of the abolitionist movement. The radical republican Congressman who was leader of the powerful House Ways and Means Committee provides the movie with a bit of levity as well as the one big surprise in the story.

Strathairn plays Secretary of State (and Lincoln's closest and most trusted confidante) William Seward with the intense conviction the part calls for.

But every other performance pales in comparison to Daniel Day-Lewis's as the sixteenth President of the United States, Abraham Lincoln. He doesn't seem to be acting at all. It's almost as if he truly believes he IS Abraham Lincoln. And with his well-known penchant for method acting and staying in character even off the set, that might just be true. In a clever move by the director we hear his thin, nasally, high-pitched speaking voice before we seem him. At first we don't realize it's the President that two black soldiers are talking to. Then the camera pulls back to reveal the unmistakable countenance of our most iconic leader.

Steven Spielberg has always been the heir apparent to Frank Capra and Lincoln is the best movie made about the inner-workings of our government since Mr. Smith goes to Washington. And unlike that film this one tells a true story. Secretary of War Edwin Stanton famously said upon Lincoln's death, “Now he belongs to the ages.” The same is true of this movie. 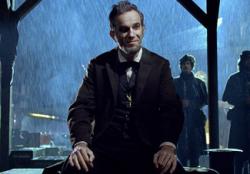 Lincoln is a good movie. It's just not as good a movie as Patrick makes it out to be. Portions of it are excellent, but it also has its weak points. It may very well earn all of the awards that he has predicted, but the near universal acclaim heaped upon it has reached the point where I would now classify it as overrated.

The area where I agree unquestionably with Patrick is in the look of the film. It is meticulous in its detail (at least to this Civil War nonexpert) and the sets, costumes and glimpses of 1865 Washington D.C. provide a "you are there" feeling to the story. I also agree that the iconic moment with Lincoln's silhouette is a strong image. In fact, I think the movie should have ended with that shot.

It is the behind the scenes scrambling for votes to pass the 13th Amendment that provides the movie's most entertaining moments. They show how politics in Washington has always been the same. Lincoln employs a team of lobbyists (one of whom is played by a scene-stealing James Spader) in an effort to get the votes required. They offer patronage and apply pressure, while Lincoln must make deals with both sides of the political spectrum. We know how the vote turns out, but Spielberg and scriptwriter Tony Kushner build suspense up anyway, even if they do drag out the announcement of the final vote too long considering we already know which side wins.

The story focuses on a four month period in Lincoln's life, but it tries to sneak in details about his earlier life. This wouldn't be a problem, but it comes in the form of some clumsy exposition posing as conversation. Several times over the course of the film, one character tells another something that happened earlier that both characters clearly already know about. They're not really telling the other person of course. They're telling the audience. While these moments provide background, such as the fact that Lincoln considered having his wife committed after the death of their son or that Stevens once investigated Mary Lincoln's housekeeping finances, they aren't necessary to tell the story. Sometimes less is more.

As for the performances, I agree that for the most part they are good. However, they're also rather old fashioned, very actorly performances. These aren't underplayed characters and there is scenery chewing going on here, particularly from Sally Field and Tommy Lee-Jones.

Patrick, the line that I disagree with the most in your review is when you say that Daniel Day-Lewis doesn't seem to be acting at all. That's exactly what he appears to be doing. It's a very studied, carefully calculated impersonation that is so uncannily accurate that it reminded me of those animatronic Presidents that they have at Disney World. It's a big performance, but definitely a performance. His every movement is saying, "Hey look at me, I'm doing Lincoln." Day-Lewis is a great actor, but I'm always aware when he is acting. There's nothing subtle about him or this movie.

I'm sure this movie will be nominated for a great number of awards, but I'm going to hold off on proclaiming it the winner just yet. It's still a long way to Oscar night. 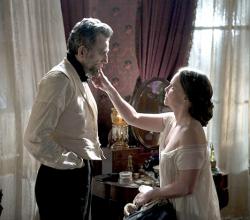 Daniel Day-Lewis and Sally Field as Abraham and Mary Lincoln.

The pacing is a bit maudlin at times. A war rages. One of their sons is dead. Lincoln rides a horse through a battlefield littered with bodies. We know Lincoln in 1865 did not have much longer of this Earth. The ending is intended to uplift us and it does. Not the scene of the amendment passing but of Tommy Lee Jones going home. I won't spoil it but it makes the film. His Thaddeus Stevens is a very interesting figure and his portrayal of him nearly steals the film.

I agree with Scott about Day-Lewis. I have always found his acting to be very structured and controlled, and never natural. It sometimes works for him here as Lincoln always seems to be constantly holding his emotions in. The only time we see him become human is when he is alone with his sons or wife. Those are my favorite scenes in the film. It is in those moments that we see the man and not the legend. He lies down next to his sleeping son. He snaps angrily at his eldest son. What father has not done those things?

My two favorite moments though belong to Sally Field as Mary. In one scene she and Lincoln argue and bring up the past. We see Mary as a woman who has a strength but has also been under so much stress that she clearly has a breaking point and does not want to reach it again. Lincoln on the other hand has to placate her while not being able to say what he may want to, as he knows she is close to the edge. Her other good moment is when she greets Thaddeus Stevens at a White House party and congenially tells him off.

I agree with Scott and Samuel L. Jackson who said, ""I don't understand why it didn't just end when Lincoln is walking down the hall and the butler gives him his hat,..." It would have been a much better ending as this is not Lincoln's story so much as it is the story of the 13th Amendment.

I do like how Spielberg book ended the film with quotes from Lincoln's speeches. It begins with one of the most famous Presidential speeches of all time, The Gettysburg Address. Several soldiers recite it to Lincoln. The last few lines are spoken by one soldier as he walks away. It contains my favorite part, "...that we here highly resolve that these dead shall not have died in vain -- that this nation, under God, shall have a new birth of freedom -- and that government of the people, by the people, for the people, shall not perish from the earth." It is a line that every war time President since should publicly recite. God bless America!