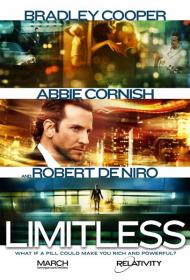 The tagline for the movie poster asks, "What if a pill could make you rich and powerful?"  Actually, the pill in question makes you smart.  It is up to the person taking the pill to decide how their new intellect will benefit them.

Eddie is a wanna be writer living in a small messy New York apartment.  Somehow, this slob has a contract with a publishing firm, even though he cannot write more than a few words.  He has hair that lice would not live in yet he was still able to get a hot girlfriend, even if it's not for long as she breaks up with him shortly into the movie.

Feeling even more down and out, Eddie runs into his former brother-in-law, Vernon.  In the movie's weakest plot device, Vernon gives Eddie a pill, called NZT, that he says is worth $800.  It makes even less sense a short time later when we learn that he stole the pills and people are willing to kill to get them back.  If you are trying to hide your stolen drugs, you do not start giving away samples to bums who obviously have no means to buy them.

The experimental drug allows the user to use 100 percent of his mind, able to recall any tiny little fact they ever read or heard in their lifetime.   The first day Eddie takes it, he uses his new found brains to lay the landlord's wife and write his novel.  Wanting more of the drug, he heads back to Vernon's place, but Vernon is no longer in a giving mood as he has a bullet in his forehead.  Eddie races through the apartment and finds the stash of NZT.

Eddie starts taking NZT on a daily basis.  Wanting to make big money quick, he turns to Wall street and the market.  Not having much capital to invest, he gets a loan from a loan shark; not a very smart thing to do for someone who knows everything.  Before you know it, Eddie is a high roller, raking in the big money.  However, Wall street is not a very private place and people take notice.  Business mogul Carl Van Loon decides Eddie maybe able to help him with a huge merger.

Also taking notice of Eddie is a man who seems to show up everywhere Eddie is.  One of the best moments in the film is when Eddie goes through Vernon's little black book trying to get in touch with Vernon's other customers.  Eddie is getting sick and wants answers.  Everyone he calls is either sick or dead.  On one phone call, he dials a number and the phone on the man who has been following him rings.  Eddie turns toward him and suddenly realizes what is going on.

Eddie is now in it deep.  The police think he killed Vernon.  Powerful men want the NZT.  He, somehow forgot to pay back the loan shark who threatened to peel the skin off his stomach and smother him with it.  Even without a magic pill, I think I would keep that deadline in mind.

As a thriller, Limitless moves along well enough, with just enough tension and suspense.  It ends with a great confrontation between Cooper and De Niro.   You think it is going one way and then switches directions.  The ending is a bit ambiguous, and inconsistent to the character.  Eddie at one time was completely unmotivated, but now wants a powerful public life?  The pill not only makes you smart but motivated? 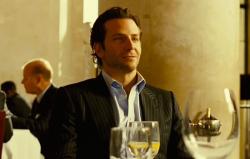 Eric, you say Vernon giving Eddie the first pill is the movie's weakest plot point, but I think the other point you raise is actually the least plausible. Eddie makes $2.5 million in two days and the first thing he does isn't pay back the psychopathic loan shark? I can't imagine any reason why he wouldn't apart from the plot needing the loan shark around for dramatic effect later in the movie.

The other thing that bothered me about the plot is that it repeats the old myth that we only use 20% of our brain and this pill unlocks the rest of it, which has been proven to be untrue. Although that point didn't annoy me as much as I thought it would since we only have Vernon's word for it that the pill works that way and he's not the brightest person in the movie anyway, so maybe he just got that wrong when he was explaining how it worked.

Despite the few weak plot points, Limitless still entertains. It's quite fast paced and flies by. As you said Eric, there's enough tension and suspense to more than hold your attention. There are even several action scenes and one shocking one when Eddie shows just how far he'll go to get the effects of the pills. I also enjoyed the way certain scenes are filmed, especially the ones where Eddie loses time.

Eric, I'd say clearly the pill makes you motivated. Eddie goes from unfocused and unmotivated to being extremely focused and motivated right from the beginning. I mean, he finishes his book in four days. I'd say that's pretty motivated. What the ending doesn't make clear is just why Eddie is running for office. Has he become truly civic minded, or does he just desire power? I tend to believe it's more of the latter based on his previous actions.

The plot's not quite as clever as it could have been. It's obvious the writers hadn't taken a magic pill before writing it, but Limitless is still a pretty decent thriller.