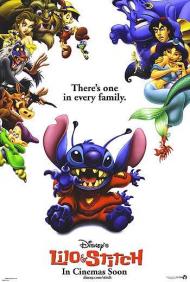 Lilo & Stitch has been billed as a non-Disney, Disney cartoon. This is true to a certain point. It's a little faster paced, a little more slapstick, a little less sickly sweet, a little more in your face. Yet beneath it all, it still contains the stamp of Disney.

The movie begins in Space, where evil genius Jumba (voiced by David Ogden Stiers, who uses a Russian accent for some reason) is on trial for genetically engineering a new destructive life form known as Experiment 626. As punishment, Jumba is jailed while Experiment 626 is sent to an asteroid where he can live out the rest of his life away from everyone else. During the journey to the asteroid he escapes in a Police ship, and ends up crash landing on the Earth.

Meanwhile, on Earth, we are introduced to Lilo, a little Hawaiian girl. Lilo is one of the darkest, quirkiest, and funniest characters in Disney history. Stitch gets all the airtime in the previews, but it's Lilo who gets the funniest lines in the movie. She's an orphan in the best Disney tradition, who tends to see the dark side of things. She has a doll that she made herself, only the head turned out too big, so she pretends that a bug laid eggs in the doll's head and it only has a few days to live. When depressed, which happens often, she likes to lie on the floor and listen to sad Elvis songs like 'Heartbreak Hotel'.

Her guardian, Lilo's older sister, decides she needs a companion so they go to the Dog Pound. It is here that Lilo meets Experiment 626. After his ship landed, he was hit by a truck. The driver, mistaking him for a dog, dropped him at the pound. Shortly after Lilo arrives at the pound, so do aliens who have been sent to retrieve Experiment 626. 626 decides the best protection he can have is to be adopted by Earthlings, since the aliens are forbidden from harming them. He charms himself into Lilo's life and she adopts him, naming him Stitch.

Ving Rhames provides the voice of the Child Services Worker, Cobra Bubbles, who is keeping an eye on Lilo and her sister. He doesn't like the situation and has warned Lilo's sister, Nana (voiced by Tia Carrere) that if things don't improve he would have to place Lilo up for adoption. Stitch only exacerbates the situation when he helps Nana lose her job.

Lilo vows to turn Stitch into a model citizen using Elvis as a guide. This leads into one of the funniest sequences in the film, culminating with Stitch on the beach in a sequined jumpsuit playing the guitar.

The movie does manage to tug at your heartstrings with its themes of loneliness and finding a place to fit in, but it does it without ever rising too high on the sap-o-meter. Although with its constant use of the word Ohana (Ohana means family, and family means no one gets left behind), it does get close a few times.

Filled with comic moments that are true gems, Lilo's temper tantrum over tuna and peanut butter at the beginning and Stitch's Godzilla impersonation both leap to mind, Lilo & Stitch is one of the funniest movies of 2002, animated or otherwise.

Lilo & Stitch is a huge pile of Disney crap! This film is a comedy? My kids, nor any others in the theatre laughed. This movie is a drama? A social worker is threatening to take a little girl away from her older, irresponsible sister. Or is it aliens taking her away? Either way the combination of these three themes mucked up a potentially good movie.

Scott wrote in his review that the Elvis scenes are 'one of the funniest sequences in the film.' That is fine, only my 8 and 6 year old have no idea who Elvis Presley is. Due to the lack of child laughter in the audience, neither did most of the kids watching the movie.

Scott also wrote that this movie, when compared to other Disney movies, 'Is a little less sickly sweet.' This movie is so vastly sickly sweet it nearly angered me. 'Ohana means family.' Give me a break! Disney is working overtime on trying to redefine what makes a family. I wrote an article you can read in Archives where I list most of the Disney movies that have child characters outside the nuclear family.

Now Disney is going to the next step in destroying the notion of the traditional family. Disney likes to shove the idea that any group of people who like each other is a family. And they're not alone, in last years Ice Age from 20th Century Fox we had a motley crew of prehistoric animals form their own unique tribe/family. At the end of this movie we have Lilo, her sister, a male friend who likes the sister and an alien posing for pictures. They have formed their own family. That is so sickly sweet I wanted to vomit. I have no idea what Disney has against the traditional family but these 'family' cartoons they keep making are proving to be anything but.

Besides the political angle of this movie I think the Disney studio itself knows this movie is a bomb. Half the previews for this movie are of the character Stitch interacting with characters from funnier Disney movies. None of those scenes, I was disappointed to find out, were actually in the movie.

OK, I got the Elvis jokes and, like Scott, thought the character of Lilo was unique and humorous. If only Disney could have decided whather this movie was a comedy, drama or science fiction. On their own, each theme worked, but when the themes crossed it all just went to hell.

Not being a big fan of animated movies I watched Lilo & Stitch without expecting too much. While it didn't change my mind about cartoons (Sorry if I offend anyone but come on, that's what they are) it is an original idea that is fast-paced and has some genuine laughs. Lilo is certainly one of the most cynical young children I've seen in any movie. She is such a pessimistic loner that it makes sense that she would be attracted to the absolute chaos of Stitch. Together they are funny and touching.

As for Eric's ridiculous statements about the nuclear family, all I can say is what are you afraid of? Here we have a big sister trying to single-handedly raise her little sister after the deaths of their parents. The little girl is ostracized by other kids her age and finally finds a friend in the form of the alien and instead of being happy for her Eric ridicules the filmmakers because they didn't portray a traditional nuclear family. I've never trusted people who accuse others of wanting 'special rights' when they take these same rights absolutely for granted. Expanding the concept of what makes a family does not pose a threat to those families that are defined as traditional, unless, of course, you need that definition as a way of feeling superior to others.

But I digress, Lilo & Stitch is not only funny and touching, it is also refreshing in the sense that the main characters are non-Caucasian. Other than The Prince of Egypt there have been far too few animated movies that feature non-white characters in the main roles. I, for one, applaud Disney for this innovation and hope it inspires other movies to branch out from the traditional and timeworn stereotypes of classic Disney fare.

That said I must confess that sometime in the past twenty years I lost my ability to immerse myself in animated movies. At best I find them mildly amusing, but I have a difficult time really connecting to the characters in a deep enough way to become invested in the story. I realize this is my loss. Lilo & Stitch comes as close as any cartoon has in a long time.