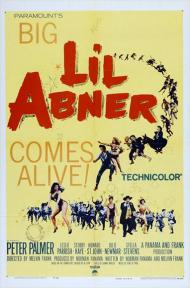 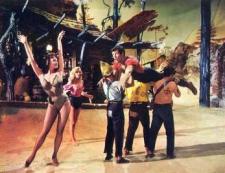 This is a movie that could never live up to my imagination.

As a kid Li'l Abner represented the Holy Grail of movies for me. I eventually waited more than twenty-five years to watch it, longer than I have ever waited to watch any movie. Our dad owned the soundtrack and I remember our mom referring to it as one of his favorite movies. My brothers and I were intrigued by the album cover. It was a group shot of the cast of Li'l Abner taken on the set of Dogpatch, the fictitious town where Li'l Abner lived. Although I had never seen the movie I could sing along to all the songs and I knew the names of just about every character in it. They were all so colorful and fascinating. They seemed to me to represent a distant, romantic past, even though at the time the movie was only about fifteen years old.

Now here comes the kicker. My brother Eric stayed up late one night watching television with our dad and I'll give you two guesses what the feature on the late show was that night. The next day I heard all about the movie. I heard about Mammy ('I has spoken') and Pappy Yokum and Mammy's Yokumberry tree from which she made her tonic. I heard about how Earthquake McGoon was always after sweet little Daisy Mae but how she only had eyes for Li'l Abner. I heard about Marryin' Sam and the Sadie Hawkins Day Race. I was told all about Available Jones and his creation Stupefyin' Jones, plus General Bullmoose, Appassionata Von Climax, Sen. Jack S. Phogbound ('there's no jack-ass like our Jack S'), and Moonbeam McSwine and Evil Eye Fleagle. Even about Hairless Joe and Lonesome Polecat. (trivia note: Buster Keaton played this part in the 1940 version) Oh yeah and I heard that our favorite movie star at the time - Jerry Lewis - even had a cameo as Itchy.

Needless to say I was incredibly jealous of my brother's good fortune and feeling sorry for myself at my own bad luck. You see this was before the days of the VCR. You couldn't go out and buy a movie like you can today. And cable T.V. was rare. Only one family on the block had it then. The rest of us had to make do with about five different channels and only three of them came in with decent reception.

For years after that I would pour over the T.V. Guide every week hoping to spot Li'l Abner but I never did. Anyway - to make a long story short - it wasn't until a few years ago that I finally saw Li'l Abner for sale in a video store and all of my childhood yearnings came rushing back over me. My wait, which had begun sometime around 1975, finally ended in 2001.

With that build-up I would like to be able to give Li'l Abner a great review. Unfortunately, even if it was a great movie, which it isn't, I don't think it could have measured up to my huge expectations. Sure it still has some charm and I get a strong sense of nostalgia from it, but it really hasn't aged very well. Based on the long running comic strip by Al Capp, Li'l Abner has, as its main plot device, the fact that the United States Government has declared Dogpatch the most unneccessary place in the country. They plan an immediate evacuation so that they can turn the area into a nuclear test site. Unless, of course, something neccessary about it can be found.

The plot is really not important. Li'l Abner is mostly about songs, dances and one-liners, most of which are harmless double entendres or poke fun at the hillbilly mentality. Some of the songs are actually quite good. I like the opening number 'Typical Day' and there are a couple of catchy tunes like 'Jubilation T. Cornpone' and 'Put Em Back'. The cast, led by Stubby Kay as Marryin' Sam, all have pretty good voices and the dance numbers are energetically performed, but to modern audiences it plays like an extra-long episode of 'Hee Haw'.

But then I don't think any movie could have lived up to what I wanted Li'l Abner to be. It had been such a huge part of my childhood imagination. Who knows, maybe in another twenty-five years I will watch it again and be able to recapture the magic, but I doubt it.

Leslie Parrish and Peter Palmer as Daisy May and Lil Abner.

Li'l Abner was definitely made on the cheap. It has a cast of mostly unknowns. Some came from the Broadway production. It's most glaring weakness is that it was filmed entirely on a sound stage. The production value would have increased greatly had it been filmed on location. Nearly the entire story takes place outside.

The dialogue is funny in places. Marryin’ Sam tells some love starved girls that his $2 wedding guarantees, "Three weeks of bliss and 50 years of quiet desperation." One of the best lines is when General Bullmoose tries to politely explain his relationship with his much younger mistress, Appassionata von Climax, to Li'l Abner, "She works for me. She gets a salary, and she sort of lives in my house." The clueless Li'l Abner then asks Appassionata, "Really? Does that mean you gets bed and board, ma'm?" To which she responds, "Extremely!"

Although everyone half heartedly puts on a faux hillbilly accent, Moonbeam McSwine seems to be channeling Fran Drescher from The Nanny. Listen to her response to Mammy telling her about how city folk sometimes have to be engaged for a month before getting married. "A whole month! What are they, insecure?"

Although mostly unknown at the time, many of the cast went on to television hit shows. Julie Newmar became the most memorable Catwoman on Batman. Donna Douglas again went country as Elli Mae on The Beverly Hillbillies. Valerie Harper played Mary Tyler Moore's best friend Rhoda, and Beth Howland was the ditzy Vera on the 1970's Alice.

This film is definitely a time capsule, but it does have a interesting connection to more recent events. Mammy feeds Abner a body building tonic. Later some other guys take it and get muscular as well. A side effect is that none of the body builders are now interested in sex. Steroids works in similar ways. It helps develop muscles, but shrinks the testicles, making the user temporarily sterile. If they ever remake this film, the tonic angle would make for great controversy, and if they do remake it, they better film it outside. 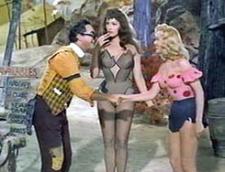 A fun, guilty pleasure of a musical.

I was never obsessed with seeing this movie to the same degree as you Patrick, but I do remember the album cover and hearing Eric describe it. And I know that I was certainly picturing a more idealized version of the movie than what it actually was, but you know what? I enjoyed it anyway. Some of the songs are quite catchy and I laughed more than a few times. Okay, so it's more of a guilty pleasure than a classic, but I could imagine myself watching this again.

Although apparently there are differences in some of the music between the movie and the original Broadway play, you might think from the way this movie was shot that it was just a filmed version of a play. Not only is it all filmed on a sound stage, but (especially at the beginning) most of the scenes are filmed on one set. This didn't really bother me though. I mean, it's not as if it's trying to be realistic at all. The obvious sets and costumes kind of added to my enjoyment. It's cheesy, but it works.

"Jubilation T. Cornpone" is one of the best songs. Stubby Kaye, while not having a great voice, adds comic chemistry to all of the songs he sings. I also like the duet he does with Daisy Mae, "I'm Past My Prime." He also gets many of the film's funniest lines.

This movie also features some nice eye-candy. This was back in the day when Hollywood wasn't afraid to let women with curves star in movies and compared to the anorexic starlets of today, the actresses in this movie look like very healthy girls. I wouldn't evict Leslie Parrish, Stella Stevens or Julie Newmar out of my dogpatch if you know what I mean.

Now that you've seen it once Patrick and come to grips with it not being the greatest story ever told, you should watch it again now instead of waiting 25 years. You might find that with lower expectations you can actually enjoy it for what it is; a nice little comic musical with a few nice numbers and some funny one-liners.

I also thought it was a sign of how technology has changed the way we can control what movies we see when you mentioned how long it took you to find this movie Patrick. After Eric reviewed it and I decided to watch it also, it took me less than 30 minutes to download it from iTunes. A far cry from the 1970s when we were at the whim of what the television channels wanted to show.