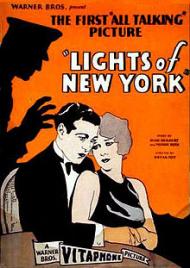 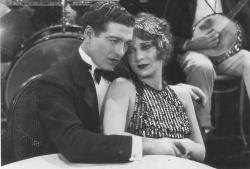 Cullen Landis and Helene Costello in Lights of New York.

Lights of New York is a forgotten motion picture outside of serious movie buffs. But it is historically important for being the very first feature-length all-talkie movie ever made. The Jazz Singer gets all the credit even though it is really a glorified silent movie with a few songs and a smattering of spoken dialogue. Lights of New York is a full fledged sound picture.

The Jazz Singer was released in October of 1927 and became a sensation. It wasn't, however, until the following summer that the talkies truly arrived. It took those intervening months for the studios to make the transition, as well as movie theaters that had to install expensive sound systems. Seen today Lights of New York offers little in the way of entertainment but it was a huge hit with audiences in 1928. Reports vary but it grossed somewhere between 20 and 40 times its production budget. By the end of 1929 (with the notable exception of Charlie Chaplin) Hollywood was only making sound pictures.

It tells the story of a couple of rube barbers from the sticks who get conned into buying a barbershop in Manhattan that is really a front for a speakeasy. This leads to a cop being murdered and subsequently the head bootlegger attempts to frame one of these innocent dupes. As an early gangster picture it features several cliches. For example this was the first time a character in a movie tells someone to, “Take him for a ride.”

The acting is pretty stiff and amateurish with Gladys Brockwell over emoting in the big climactic scene. Helene Costello got top billing even though she has much less screen time than Landis. The handsome but untalented Cullen Landis has the real starring role as Eddie, the young barber off to make good in the big city with his mother's life savings. The most recognizable face in the picture belongs to Eugene Pallette, who plays Eddie's pal and business partner. Edward Everett Horton appears as an extra, see if you can spot him.

As Singin' in the Rain so humorously demonstrated, the camera movement in the movie is severely limited by the newfangled concept of microphones. In many scenes the actors practically huddle together so as to have their lines picked up by the primitive recording process. In one scene the microphone is obviously planted in the top of a telephone on a man's desk. The actor speaks his lines with his head hovering close to it.

If Lights of New York had been made just a few months later it would long since have been forgotten by even the most avid movie buff. As the very first all talking movie, however, its historical importance is unquestioned. But truth be told it's really pretty awful. 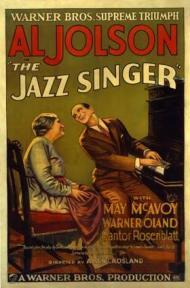