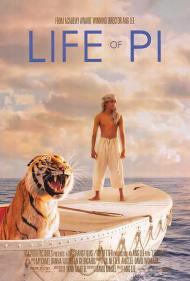 From Oscar winning director Ang Lee comes this visually stunning, poetic tale of survival and faith. Taken from the 2001 book of the same name by Yann Martel, Life of Pi tells the miraculous story of how one young man survived at sea for 227 days in a lifeboat shared with an adult male Bengal Tiger named Richard Parker (see photo). Life of Pi is filled with breathtakingly beautiful images that take full advantage of today's 3-D cinematography. It deals with such lofty themes as the existence of God, as well as the desperate lengths humans will go to in order to stay alive.

Through flashbacks the now middle-aged Pi tells his life story to a writer. The first section of the story is lighthearted in tone. It tells of Pi's childhood growing up at his father's zoo in India. Pi's father had an obsession with swimming pools and he named his son Piscine Molitar Patel after a famous pool in France he considered to be the most beautiful in the world. Of course in school this quickly became “Pissing Patel” so Pi used his mathematical skills in class to get the other kids to call him by this new shorter moniker. Pi was quite a spiritual boy. He was so intrigued with various religions that by the time he was 14 he had become a practicing Hindu, Christian and Muslim. During this first section of the movie Pi experiences his first love. But then comes the fateful day when the family must sell the zoo and move to Canada.

They book passage on a Japanese freighter that sinks in a storm, leaving Pi as the only human survivor. He finds himself aboard a lifeboat with a menagerie of animals from his father's zoo that were being transported to America to sell. There is a zebra with a broken leg, a mother orangutan that lost its offspring, and a hyena. The hyena begins to eat the zebra, which eventually dies. It then begins a fight with the orangutan which it also kills. Suddenly from beneath the boat's tarp comes a charging Bengal tiger which savagely attacks and kills the hyena. This leaves Pi and the tiger as the only occupants of the lifeboat for the duration of the adventure.

Seventeen year old Suraj Sharma makes his movie debut as the teenaged Pi. Like Tom Hanks in Castaway he is the sole actor on screen for long stretches of the film. He does quite a remarkable job for a rookie thespian. The role was clearly quite physically demanding as he spends plenty of time in the water. In addition to that he had to interact believably with the many CGI animals, which he does, and the part also called for some heavy drama and the ability to toss off humorously sarcastic one-liners, all of which the novice actor handles like a pro.

Visually Life of Pi is truly gorgeous. The scene with the whale leaping out of the water under a starry night sky is just one of many memorable images in this imaginative tale of wonder. Others include a swarm of flying fish and a mysterious island filled with thousands of meerkats. The 3-D is quite effective in several shots. The one that impressed me the most is when Pi is in the foreground, but underwater, watching as the still brilliantly lit ship sinks into the watery abyss below.

SPOILER ALERT: Stop reading now if you don't want to know the ending of the story.

It turns out that Pi's adventure at sea may in fact be allegorical. When being interviewed by men sent by the owner's of the Japanese freighter Pi tells them a second version of his story. In this one he is stranded in the lifeboat with an injured sailor, his mother and the ship's cook. Parallels between the two stories imply the sailor was represented by the zebra, Pi's mother was the orangutan, the cook was the hyena, and Pi himself was the tiger. In other words Pi needed to channel his inner beast to survive the ordeal. In his mind he fragmented his personality in order to justify his actions in committing murder. It wasn't him, it was the tiger, get it? I'm sure this ending will be polarizing to many viewers. It also explains why M. Knight Shyamalan was originally slated to direct Life of Pi as this is the type of surprise plot twist that has long since been his trademark.

Life of Pi is a good movie but despite the talented cast and the sheer beauty of the film it's a bit uneven in tone and unfolds at a rather slow pace. It also fails to successfully achieve the full emotional impact of the grandiose themes it aspires to. What's left is a visually amazing cinematic experience that somehow misses the mark of greatness. 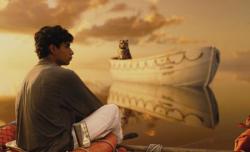 Even with the "Spoiler Alert", I'm a bit surprised that Patrick gave away the ending to this film. However, since he went ahead and opened that can of worms, you should be aware that I'm going to discuss it as well, so read no further if you haven't seen the film yet.

The difference between this film and a movie like The Sixth Sense, which is probably the best "twist ending" movie ever made, is that The Sixth Sense was a great movie before the ending was revealed. The twist only makes it greater. With Life of Pi, the ending actually made my opinion of it make a 180 degree turn. It wasn't until I fully understood the ending that I enjoyed it.

I had no knowledge of this film prior to seeing it. I wasn't anticipating a twist and so wasn't looking for one, although it's easy to see the clues for it once you know what it is. The human name of the Tiger is revealing, but Gerard Depardieu, in what is basically a cameo appearance, is the first such clue. Obviously, Ang Lee wanted a recognizable face in that part so that you would remember his character at the end of the film. How all the animals got loose, is another question that isn't answered until you know the ending and the same goes for how a Bengal Tiger could be hidden underneath a lifeboat's tarp for so long before anyone knew he was on-board.

The first blatant clue that all isn't what it seems is when Pi and Richard Parker land on the island of Meerkats. Still not expecting a twist, however, I assumed that much of its oddness was due to Pi's near madness by this point.

My biggest problem with the story before I knew that everything was symbolic rather than literal, was when Pi saved the life of the Tiger instead of letting him drown. This was just too touchy-feely for me. No matter how much of a vegetarian or respecter of all life, this action made no sense to me. Surely, when you're trapped on a rather small lifeboat with a full grown tiger, if it jumps overboard, you don't help it back into the boat.

It wasn't until a conversation with Patrick after the film that I fully grasped the complete implication of the twist. This is definitely the kind of movie where it helps to have someone to talk about it with afterward. Once you know the truth about the tiger, it not only makes sense that he saved the "tiger's" life, but it was imperative that he did. The truth reveals that he wasn't kidding when he said that keeping the tiger alive is what saved his life.

As Patrick said, the story moves at a slow pace. It could easily have begun on board the ship. We also didn't really need the framing device, especially when at one point we have an older Pi telling a story about how a younger Pi is telling a story. He could just as easily have been telling the story to the Japanese investigators without ever including the older section, although seeing how Pi turned out later in life does add poignancy to the story.

Visually, the movie is everything Patrick described and I do recommend seeing this in 3-D. The scenes with the tiger are very well done. It's a mixture of live action and CGI and it's difficult to tell which is which.

After the twist I went from thinking that this was a beautiful, but not so great movie, to thinking that now I want to see it again with the benefit of hindsight. 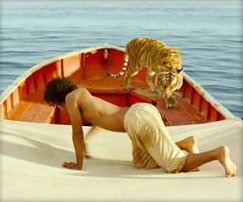 Scott is correct. It definitely helped that I saw this film with my son and we were able to discuss it on the way home. However, I think Scott missed the real point of the story as he was too distracted by the twist ending. Patrick touched on it when he wrote, "It deals with such lofty themes as the existence of God, as well as the desperate lengths humans will go to in order to stay alive."

The theme of this film is about the existence of God but even more so about faith and a belief in something greater than ourselves.  As a child, Pi visits several religions with an open mind and an open heart. He is in search of big questions that never really get answered. He tells the writer that the Tiger taught him to believe in God and he did.

At the end of the film we know both stories, the truth and the fiction. Pi asks the writer which one he prefers and the writer responds the one with the tiger. Pi then says to him, "As goes God." Thus the theme is that religion or a belief in something unproven may be preferred to reality. Like Pi surviving alone in the ocean, humans have often chosen to believe in something intangible that helps them to get through traumatic times. The phrase, "There are no atheists in fox holes." certainly relates to this theme.

Man's survival instincts are not only of the physiological but the mental as well. Pi did what he had to do to stay alive but he also constructed a lie to keep himself mentally stable. Note the island he visits. Shown from a distant it is the shape of a man lying on his back. During the day it is colorful and alive, but at night it turns deadly. Is this not symbolic of how man has both good and evil within him?

Life of Pi tackles the very difficult subject of faith better than any movie I have ever seen. It explains just why so many people chose to believe in something that cannot be proven and why the rest of us should not judge them for it. Faith is as personal an issue as any and is unique to the individual. Pi chose to remember an experience in a way that makes sense in his mind. Who is to say he was wrong?