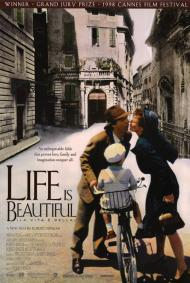 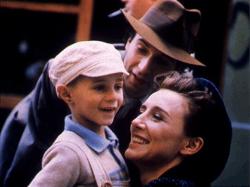 Life is Beautiful is that wonderfully rare film that leaves you feeling happy to be alive. What really makes this stand out from all other feel good movies is that this one is centered in one of the most hellish places on earth, a Nazi extermination camp. From something so horrendous comes something so life affirming.

A waiter to be, Guido, meets and falls in love with upper class Dora. Played by Benigni, Guido is not a handsome man, yet, his amazingly positive out look on life and brilliant sense of humor steals the heart of Dora, played by Benigni's real life wife Nicoletta Braschi. After a magical courtship, they marry and Dora gives birth to a son, Eliseo.

Guido is Jewish and this movie takes place in Italy during World War II. The film changes tone from light romantic comedy to a moving drama when Guido and Eliseo are put on a train to go to a concentration camp. Dora races to the train station and insists that she, although not Jewish, be put on the train as well.

Upon arrival, the horrors of their situation become apparent. The women are separated from the men and all of the old people are simply taken away. Guido begins a game with his young son. He makes him believe that all of this is a contest. Every time he hides and does not complain, he gets points. His son's favorite toy is a tank, so Guido tells him that at the end of the game if they have the most points they could win a real tank.

The movie has several suspense scenes and near misses. At one point, his son accidentally saves himself when it is announced that all of the children in the camp are to be taken to the showers. His dislike for bathing proved to be valuable. Another haunting scene has Guido carrying his son through the camp on a very foggy night. They get lost and come upon a pile of corpses. He hides his son's face in his shoulder and tells him that this is all a dream.

The end of the movie is both sad and triumphant. I do not wish to spoil the entire ending but the moment Guido's son sees the real tank is overwhelming. This is an amazing film. Life can be beautiful in any situation. It is just up to you to see it that way. 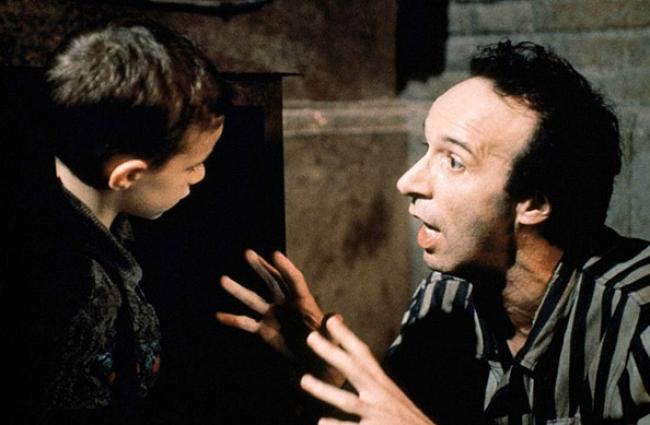 Giorgio Cantarini and Roberto Benigni in Life is Beautiful.

My lasting memory in connection with this film will always be the exuberance its writer/director/star, Roberto Benigni, showed at the Academy Awards when he won the Best Actor Oscar in 1999. At the time he was just the third person to win an acting Oscar for a performance delivered entirely in a foreign language, and just the second person to win one while directing himself. Who can forget him standing on his chair and then leaping from seat to seat for a few rows as he headed to the stage. Clearly, the character of Guido in this film wasn't too much of a stretch from the real Benigni.

While I do agree with Eric that this is a beautifully life-affirming film that will leave you smiling through your tears, it's not quite a perfect one. The final half, with Guido bravely keeping up the comedy in front of his son as they endure the hellish life inside a concentration camp, is what the film will be rightly remembered for, but there's nearly an hour's worth of film before that starts. Your level of enjoyment of that first half will be largely dependent upon how charming you find Benigni.

Although he is funny in a way that will likely remind you of a silent comic, his antics begin to grate after awhile. He would be a very annoying person to know. His comic shtick only has one gear and it's the fourth one, with his comedy pedal pushed all the way down to the floor. Once they arrive in the concentration camp and the horror of their situation sets in, it acts as a counterweight to his more flamboyant comedy, but it is unrestricted in the lighter first half. There's nothing subtle about his performance and he clearly won the Oscar based more on audience's affection for the film than for his genuine acting ability.

It's no coincidence that one of the film's most powerful moments is in a scene where Guido is almost completely silent. He has pinned his hopes on his old acquaintanceship with the German Doctor at the camp, convinced that he will help him and his son. The news that instead of help, the Doctor simply wants the answer to a riddle as part of a game the two of them used to play before the war, comes a punch to the gut. This, followed by the scene Eric mentioned where Guido stumbles upon a mound of corpses is a sharp reminder that no matter how light it is played, this is still a life or death situation.

However, to nitpick Benigni's performance is to undercut the emotion this film generates. Who cannot empathize with a father trying to protect his son in one of the worst situations imaginable? The ending is telegraphed well ahead of time, but it will still affect you if you have even the Grinchiest sized heart. You will shed tears, but they will be a mixture of sad and happy ones.