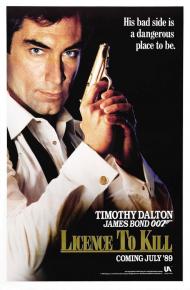 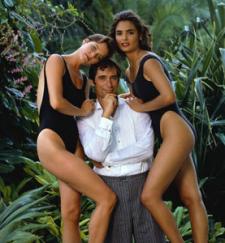 If only Dalton had been given the opportunity to do one more Bond film.

Licence to Kill really is a unique Bond movie, especially the first half. It's an old cliché in movie previews that, "This time it's personal" but in this movie's case that really is true. This isn't Bond being sent on a mission to stop some evil criminal syndicate from holding the world to ransom. This is Bond going after a South American Drug Lord, on his own and for personal reasons. This is also a darker Bond movie than we've seen in a long time.

The pre-credit sequence of this movie involves Bond and Felix Leiter hunting down Sanchez, a drug lord who has entered America's jurisdiction. They also happen to be on the way to Felix's wedding where Bond is the best man. Luckily they manage to capture Sanchez and parachute out of a plane down to the church in time for both the wedding and the opening credits. Unluckily for them, Sanchez escapes and gets his revenge by killing Felix's bride and nearly killing Felix. Bond heads off on his own and against orders to hunt and bring Sanchez, and all of his operations, down to avenge his friend. Along the way Bond does meet a good and a bad Bond girl and Sanchez does have a henchmen (although not superhumanly strong, but played by a very young Benicio Del Toro) and Bond does end up blowing up Sanchez's headquarters, but despite these things, this is still unlike any of the other Bond movies in the series.

One problem with the movie is that Bond's relationship with Felix Leiter in the movies has always been pretty casual and strictly business. Leiter is more like Bond's assistant most of the time and he's been played by so many different actors (although the actor who plays him here also played him in Live and Let Die) that we don't have a strong feeling towards him. It's not like M or Q or Moneypenny has been attacked. For them the audience might feel something stronger. Also, David Hedison isn't that great in the part and Priscilla Barnes, who plays Mrs. Leiter, will always just be the woman who replaced Suzanne Sommers on Three's Company. It's hard to take her seriously. It's also not helped that their wedding scene features some not so great dialog. So Bond's motivation isn't quite as strong as it should be. I think having two better actors and a lot better writing would have started this movie on a much stronger footing.

The best part of this movie is Dalton's performance as Bond. The Living Daylights, the previous Bond movie, had been written with Roger Moore in mind, but the script for this one was written to Dalton's strengths. It's much more serious. There are hardly any gadgets, Bond is more serious and much darker. And yet, unlike Daniel Craig's charmless Bond, Dalton manages to be serious while remaining suave and sophisticated.

I think that it was probably Dalton's affinity for the original Bond novels that inspired the writers to include so many references to previous Bonds and the Bond novels and short stories. At the beginning of the movie Sanchez lands on Crab Key, which is the island where Dr. No had his headquarters. Felix mentions to his wife that Bond was married before, " A long time ago." Obviously a reference to Tracy from On Her Majesty's Secret Service. Sanchez whips his girlfriend Lupe with a stingray tail, which is a reference to the Bond short story, "The Hildebrand Rarity". The character of Milton Krest and his boat, the WaveKrest, are also taken from the same short story. Felix being fed to sharks through the trapdoor inside the warehouse and the note, "He disagreed with something that ate him." are taken from the novel "Live and Let Die". Ironically though, this was the first Bond movie to not be named after an Ian Fleming novel or short story. It's original title was to be Licence Revoked, but was changed to the more generic Licence to Kill when it was decided that Americans might get confused and think that it meant Bond was losing his driver's license.

The name change certainly didn't help because while it was more successful outside of the US, here it was the lowest grossing of all the Bond films. This is partly due to the departure from the usual formula that took some members of the audience by surprise and hurt the word-of-mouth, but it also suffered because of the lack of promotion due to legal conflicts that were starting between EON productions who made the Bond movies and MGM/UA who distributed and promoted them. The legal wrangling between these two companies along with other legal woes (some of which dated back to the early 1960s) would prevent another Bond movie from being made for another six years. This was also the first Bond movie to be rated PG-13, although this seems unlikely to be a cause for the weaker box office. One gets the feeling that if that rating had existed earlier than all of the Bond movies would have been so rated.

I remember being disappointed with this movie myself when it was released, but watching it now I was surprised to discover just how much I enjoyed it. Carey Lowell makes a good Bond girl as Pam Bouvier, although Talisa Soto isn't nearly as strong as Lupe, the other Bond girl. Desmond Llewelyn gets a few really nice and funny scenes as Q. Overall I found a lot of things to like about this movie. I sometimes think of this as the forgotten Bond movie. I think it certainly has to be one of the most underrated of all the movies and I wish again that Dalton had been allowed to make at least one more movie as James Bond. 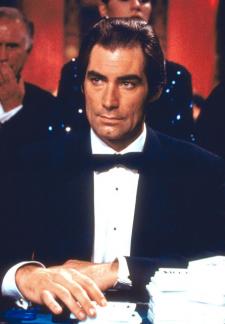 Licence to Kill is one of the most unique of the Bond movies. It is dark, and contains some of the most gory scenes of the series. Several people meet with a grotesque demise. It also has a unique soundtrack in that it starts with the theme song by Gladys Knight, and ends with a more famous song, If You Asked Me To, sung by Patti Labelle. It would later be remade into an even bigger hit by Celine Dion.

The beginning is the weakest aspect for me as it features Felix, who has never been a strong character. Once the movie gets past the opening credits the movie is pure Bond escapist pleasure. Bond finds himself upsetting the balance of not only the drug manufacturers, but that of the CIA and the Japanese secret service. He make lots of enemies here.

It makes the best use of Q of all of the movies,“Oh, don't be an idiot, 007. I know exactly what you're up to, and quite frankly, you're going to need my help. Remember, if it hadn't been for Q Branch, you'd have been dead long ago.” He acts as a field agent and is part of the films funniest scene. Bond gets turned down by Pam so he has to share a room with him, “I hope you don’t snore, Q.”

This is easily a better film than The Living Daylights, but who did Dalton’s hair? No doubt to cover his thin hair, they brushed it back. It has the effect of giving him a pointed hairline on his forehead. When he wears a tuxedo I kept thinking that he looked like Bela Lugosi from Dracula (1931). Dalton could have definitely gone on to make more great Bond films, but hopefully with a better hairstylist. 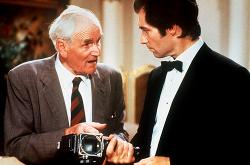 Desmond Llewelyn and Timothy Dalton in License to Kill.

It’s fitting that a reference is made to On Her Majesty’s Secret Service since that movie and this one are the two most unique in the series. While that movie was original for being the only George Lazenby appearance as 007 and for having Bond get married, License to Kill is original for having James go rogue, hell bent on revenge.

This plot angle makes sense given the time of its release. Looking back, 1989 was sort of a Golden Age in the U.S. The Cold War had just ended while the Gulf War and the subsequent War on Terror were still a few years in the future. Not since the end of WWII had America been as secure as it was during that final summer of the 80’s.

Scott I see your point about how Bond’s motivation could have been stronger and I agree with you both that the beginning is the weakest part. Once Bond disobeys M’s direct order and jumps over that balcony railing, however, the movie really takes off.

This is definitely darker and gorier than previous entries in the franchise. These bad guys mean business. One look at Benicio Del Toro’s baby-face and you knew he was going to be a star. Carey Lowell is good as an American Bond babe but I thought Talisa Soto was equally appealing. In fact, rarely has a Bond movie featured two such memorable female characters.

The action is fast-paced. There is one scene where Bond goes from fighting underwater in scuba gear to hanging from an airplane within a matter of seconds. In fact if you had gone to the restroom during that part you would be forgiven for wondering just how the hell it happened.

While this movie is a departure for 007 it includes enough Bond trademarks to please hardcore fans. About an hour in we get the requisite scene of a tuxedoed Bond, next to a beautiful woman, ordering a vodka martini at a gambling table. And it is fun seeing Desmond Llewelyn (making his 14th appearance as Q) getting in on the action. Licence to Kill marks his finest hour.

Timothy Dalton will always be the underrated James Bond and License to Kill the forgotten movie of the series, which is a shame as they both deserve better. On a personal note, this review completes my critiquing of every Bond movie to date and appropriately enough I’m posting it on Roger Moore’s birthday. 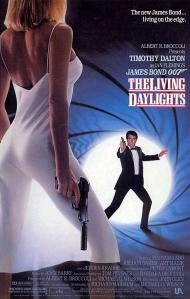