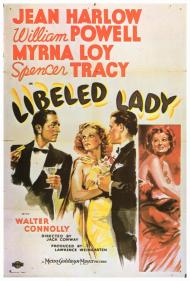 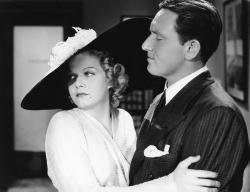 Libeled Lady is a classic screwball farce from the mid-thirties featuring an all-star cast. William Powell and Myrna Loy demonstrate their sparkling chemistry together, which can be summed up by the following interchange between them. Powell: "I thought that was rather clever of me." Loy: "Yes, I thought you thought so." Spencer Tracy is also good in this early comedic role but it is the dazzling Jean Harlow who once again steals the show. She has many funny lines. My favorite is when she explains her husband's (William Powell) charm to her fiancé (Spencer Tracy) - trust me, in the movie that makes sense. She tells him, "That's just technique Warren. You wouldn't understand."

Tracy is a newspaperman who keeps putting off his wedding to Harlow. When his paper erroneously prints an article accusing society darling Myrna Loy of being a home-wrecker, she threatens them with a five million dollar libel suit. The quick thinking reporter hatches a scheme. He convinces his colleague to temporarily marry his fiancée (see I told you it made sense) in order to set up the society dame and get pictures of her in another marriage breaking scandal, thus forcing her to drop the lawsuit. Still with me?

This set up is pregnant with humorous possibilities and the writers give birth to many of them. Powell must learn to fish in order to get close to Myrna Loy's father. Walter Connolly, practically reprising his role from It Happened One Night plays the wealthy father. The fishing scene, where Powell demonstrates the difficult to master underhand cast, is a comic gem.

Libeled Lady is a fast paced romp, with familiar stars in roles they were born to play and a crackling script that manages to sneak a few suggestive lines past the Hays Code office. When Harlow asks a cabbie if he can go any faster he replies, "I can lady, but the cab can't."

Neither can most of today's comedies. 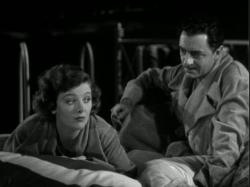 Patrick, your unabashed enthusiasm and Harlow's top-billing led me to believe that she was the star of this movie, but the credits are misleading as Harlow's part is a supporting one and Powell and Loy are the real stars.  Apart from that though, I have to agree that this is great and funny film.  I wouldn't call it my favorite screwball comedy, but it is a good one.

Reportedly Harlow signed on to do this picture because she wanted to play the lead role of Connie Allenbury, in part because Connie ends up with Bill, played by William Powell, whom Harlow was in a relationship with at the time.  However, the studio wanted another Powell and Loy pairing and so Harlow ended up in the smaller part, but kept top billing.

The setup to the movie is a brilliant one and leads to many funny lines of dialogue such as, "She may be his wife, but she's engaged to me!"  The final scene where everything gets sorted out, confused again and then re-sorted out is a great one and is the only scene in the film where all four of the leads appear together.

You refer Patrick to a few lines that are slipped in that manage to get around the Hays Code by virtue of innuendo.  Harlow as Gladys says, "I don't care who he is. Nobody talks to me like a house detective." To which Tracy as Warren replies, "How do you know how a house detective talks?"  And Glady's replies with a knowing look, "Don't you think I read?"  The lines are funny, but it's sad that just 4 years earlier Harlow could play a prostitute and a homewrecker, but here is forced to make double-entendres in hopes they got past the censors.

It's easy to see why MGM would prefer Loy and Powell together in a film, despite Powell and Harlow's real-life relationship.  Together they are the epitome of style and sophistication.  Powell wasn't the best looking guy, but he certainly had style and Loy was beautiful and as refined as fine china.

Harlow on the other hand, does not look her best here.  Her face is puffy and she looks older than her age, which was just 25. It's quite sad to think that the kidney disease that would kill her in less than a year after this movie was released, was already at work pumping toxins into her system.  Medical science of the 1930s just wan't up to the task of diagnosing her condition.  Filming on this movie was delayed by ten days because of her, following what was then diagnosed as sunburn poisoning.  Despite this, she was still at the top of her comedy game and I have to agree that she steals every scene she appears in.

This is definitely a movie where star power matters.  This talented cast takes a good script with a zany central idea and turns it into comedy gold. 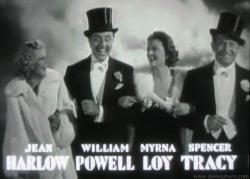 It is worth watching just for the cast alone.

The four movie stars truly make Libeled Lady better than what it deserves to be.  The scheme is ridiculous.  Powell marries Harlow just so he can get caught with Loy so Tracy can print another story about Loy supposedly being a home wrecker.    Dozens of people know that Harlow and Tracy have been engaged for years and it would not be hard to prove in court that it was just a setup.

The plot works it's way back and forth as we wait for the moment when Harlow walks in on Powell and Loy, and puts on a show.   Even though this is just over an hour and a half in length, it seemed to take too long to get there.  Granted the scene, when it finally arrives, is a good one.

Like Patrick and Scott, I liked the dialogue.  The line, "I can lady, but the cab can't." falls flat.  Patrick heard it as a sexual innuendo, and maybe it was intended to be.  However, the cab driver delivers the line straight, leaving the audience to decide if he means faster sexually or his ability to drive a car faster.   Had he smiled or winked when he said it, the joke would have made sense.

Scott mentioned my favorite line, but another good one is when Loy and Powell visit a Justice of the Peace in the middle of the night.   The bathrobe wearing wife asks, "Are they sober?"  and Loy responds, "This is love, not liquor."

Libeled Lady is a quintessential 1930's comedy, featuring four of the decades biggest stars.  It's plot revolves around the newspaper business like so many did then, think It Happened One Night, His Girl Friday and Platinum Blonde.  It showcases the leisurely rich, as was also a tradition of the time, think My Man Godfrey, Holiday and Bringing Up Baby.

As my brothers pointed out, the censorship of the time dampens some jokes.  The worst aspect for me is that I really did not like any of the characters.  Loy is just a lay about rich chick.  Powell is a con man.  Harlow is an ignoramus waiting for a man to propose.  Tracy is more interested in scandals than the girl who loves him.    I wanted to see how it all ended but I really did not care what happened to any of them.