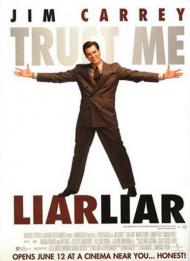 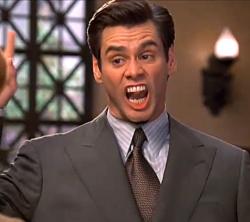 Liar Liar is one of Jim Carrey's better films. His exaggerated expressions and pratfalls are as good here as they are in any of his movies. His role is both realistic and ridiculous. Liar Liar is a great comedy with heart. Although it sometimes seems to resemble a family film, it includes some mature subjects.

Carrey plays Fletcher, a self-centered, kiss ass lawyer. He has a son whom he never keeps promises to. That is until his son makes a wish that Fletcher, for one day cannot tell a lie. Meanwhile, Fletcher is the lawyer of an unfaithful woman who is trying to get money out of her husband. The only possible way Fletcher can win this case is to lie.

The plot becomes absolutely hysterical as Fletcher tells everyone he meets exactly what he thinks of them. Of course he also learns a lot about himself in the process. He comes to a moment of self-discovery when he announces to his ex wife "I am a bad father." He pauses after saying it because he knows that he can only speak the truth.

Jim Carrey is amazing in this film. He is like Charlie Chaplin. You laugh at the physical humor but you feel for his character. The greatest comedic moments are when Carrey is the only one on screen. In one brilliant scene, he looses a battle with a pen. His best scene and line is when he beats himself up in a public bathroom to try to get out of court. A man walks in as he is slamming his head with the toilet seat and asks him what he is doing. Carrey straightens up, looks at him and says; "I am kicking my ass! Do you mind?"

The swearing in the movie is not extreme, but it does seem occasionally out of place. This movie boasts a strong message about the value of dads and of course, it is a moral lesson about telling the truth. Liar Liar may have something for the whole family, but some of the jokes may be inappropriate for younger children.