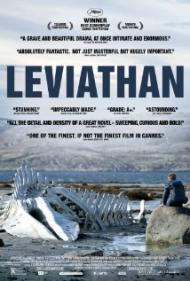 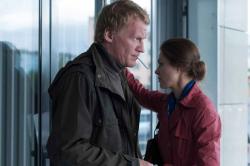 From Russian writer/director Andrey Zvyagintsev comes this modern tragedy that was inspired by such disparate elements as the true story of Marvin Heemeyer and the Bible's Book of Job. Heemeyer made headlines after he rampaged through the small town of Granby, Colorado on a bulldozer in 2004 over a property rights dispute, and, according to scripture, Job endured a series of calamities as a test of his faith. So it should be perfectly clear from the start that Leviathan isn't a happy movie.

The film is set in Northern Russia on a desolate peninsula near the Barents Sea. A local man is in a legal dispute over his property with the corrupt mayor of the town. He is married to his second wife and has a teenaged son from his first marriage. He enlists the help of an old friend who now practices law in Moscow. This friend has been able to dig up plenty of dirt on the mayor and plans to blackmail him into giving up all claims to his friend's land. Of course things don't go exactly as planned and the story turns tragic.

Corruption of both church and state, and betrayal, are its themes. It should therefore come as no surprise that the powers that be in Russia have sought to suppress Leviathan (the crooked mayor has a picture of Vladimir Putin prominently displayed in his office). Vladimir Medinsky, Minister of Culture, has publicly criticized the movie for what he calls its negative stereotypes of Russian culture and has even proposed guidelines that would ban movies that “defile national culture.” Apparently Zvyagintsev struck a nerve.

The story is paced languidly. The camera moves slowly and there are many long establishing shots. The desolate landscape is lingered on often. The land, water and sky are stark yet beautiful. The characters smoke cigarettes constantly and consume copious amounts of vodka. In one scene they mix vodka and armed target practice while on a picnic with women and children present.

The acting is first rate. Aleksey Serebryakov and Elena Lyadova are both terrific as a married couple enduring hard times. Roman Madyanov is perfectly despicable as the mayor. He represents the corruption of the state while a high priest named Vasiliy represents the corruption of the church. When the crooked mayor seeks advice from the priest he is given tacit permission to use the threat of violence to get his way. Betrayal by supposed friends is also a theme of Leviathan. These details are best discovered as you watch the film, so I will write no more about that.

Leviathan is up for Best Foreign Language Film at this year's Academy Awards. It already won this award at the Golden Globes, making it the frontrunner in the category at the Oscars. Zvyagintsev is a master filmmaker. His movie tackles grand themes in an intimate manner without spelling out every detail for the audience. The cinematography is as piercing and bleak as the story being told. You certainly won't leave Leviathan feeling uplifted about the human condition but you will feel as if you have witnessed a very true to life story about greed and mankind's often self-serving nature.

Sergey Pokhodaev as Roma in Leviathan

No matter whether Leviathan is based on a book from the Bible or a real event, this Russian drama is far too long, 140 minutes, and far too slow. The story unfolds as if the viewer is a mere casual distant observer. We hear often about the folder full of damning information but never the content. On a group outing, we hear a child tell of his perspective of seeing Lilya and Dimitry having sex. He thinks Lilya is being choked. We never see the deed or the confrontation they have with Lilya’s gun carrying husband, just the bruises of their faces on the car ride home. Dimitry getting beat by the mayor's thugs happens without sound and from an obscured distance.

One scene involves Lilya getting ready for work, riding the bus and working at a fish factory. None of this involves any dialogue, just her slow solitary morning demonstrating that she has plenty of time to think things over. A bit later, her friend asks if DImitry asked her to go to Moscow with her. Instead of those scenes all we needed was a, “I could not sleep because of all that was on my mind.” Some things do not need to be shown.

What this film has to offer is a group of very real people. No one is “Hollywood” attractive. One character refers to Dimitry as good looking but he only fits that bill in comparison to the other people on screen. His “sophistication” is obvious as he lives in Moscow while everyone else lives in this rough country region. Often we view these folks while they sit around a table conversing. They dress appropriately for the climate no matter how unglamorous. The women never wear makeup and their hair is not professionally kept up.

Almost everyone drinks to excess, especially Kolya. He loves his wife but is not a prize husband. Dimitry is his friend from childhood but he betrays him with the affair. Kolya and Lilya’s son, Roma, is caught in the middle of their problems. His outburst at finding his parents having sex after the affair is touching. He now also feels betrayed by his father for forgiving his mother for the affair.

Patrick mentioned that this is based on biblical references. The movie is dripping with religious moments. Lilya asks Dimitry if he believes in God and he responds that he believes in facts. Roma hangs out in the remains of a destroyed church with his friends. We even get shown an entire church sermon. Vadim, the mayor, seeks advice from a priest, “All power comes from God. As long as it suits Him, fear not.” Later, Kolya seeks his advice as well. The priest quotes the Bible, “Can you pull in Leviathan with a fishhook or tie down the tongue with a rope? Will it keep begging you for mercy? Will it speak to you with gentle words? Nothing on earth is its equal. It is king over all that are proud.”

Leviathan refers to a great sea serpent mentioned several times in the Bible. It has also been used in the past in reference to whales. After discovering his parents having sex, Roma runs out and cries next to a whale skeleton. Here it clearly symbolizes the huge problems in Kolya’s life. The mayor is trying to take his property, his wife and best friend have an affair and he constantly drinks himself to sleep.

The best Leviathan has to offer is the performances. The entire cast is remarkable. There is not a weak link in the acting chain. I was touched several times by emotional scenes of these very real people experiencing very real hardships. The problem is that although the director was able to draw authenticity from the actors he was not capable of maintaining a worthy pace, languid indeed. At least 30 minutes of this bleak, depressing film could have, and should have, been trimmed.