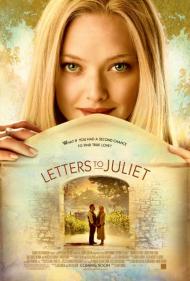 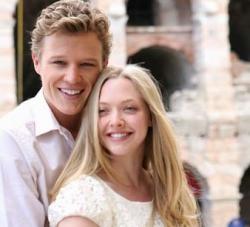 With the sun drenched Italian landscape as it's setting, and the pairing of two famous long time real partners, Redgrave and Nero, Letters to Juliet had the potential to be a very romantic film.  It is unfortunately bogged down by a snails pace and constant drivel disguised as dialogue.  "I'm sorry, I didn't know love had an expiration date."

Sophie and her fiance, Victor, take a trip to Verona, Italy where her fiance is looking for distributors for his new gourmet Italian restaurant in New York.  She gets bored with wine and food tasting, so they end up spending most of the trip separated.  She finds an old letter written by an English woman, Claire, 50 years before.  She writes her back as Juliet from Shakespeare's story.  Claire shows up with her grandson, Charlie, and the three take a road trip to find her long lost love, Lorenzo.

At first Charlie and Sophie argue, but as anyone who has ever seen a Hollywood movie knows, that is just sexual friction waiting for the right moment.  It comes one night as they lay under the stars.  Charlie says to Sophie, "Why is it I feel like a school boy on Sunday. Its nearly tomorrow and I don't want to go."  Sophie agrees, "Me either, and I always liked school."

It is clear that Sophie is not meant for Victor.  She gets bored every time he is around.  He is more interested in his restaurant than her.  However, other than being the same age as Charlie, there is no reason given for why Sophie should be with Charlie.  When the moment comes when Sophie must return to Victor, and Claire tells Charlie, "Don't wait 50 years like I did." I should have felt something, but did not.

I never cared if Sophie and Charlie got together.  Of course it ends with her on a balcony and he pledging his love below, "Because the truth is, Sophie, I am madly, deeply, truly, passionately in love with you."   "You are?"   No doubt they will live happily ever after and raise very dull Aryan looking children together.

The only character I liked was Victor.  He takes a trip to Italy to immerse himself into the food and culture to help out his restaurant.  He invites Sophie along for all of it but she is so damn boring she would rather wander around and poke her nose into other peoples business.

Claire and Lorenzo end up getting married.   In real life Redgrave and Nero met during the filming of Camelot in 1967.  They fell in love and had a child in 1969.   Like the characters they play in the film.  They did not marry for decades.  Nero and Redgrave finally married in 2006.