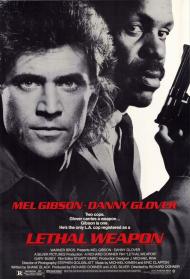 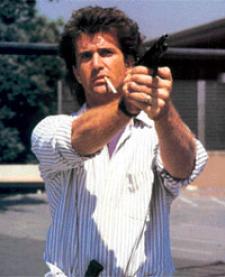 Scott reviewed the James Bond movies in the order they were made. Patrick reviewed the Hope/Crosby Road movies in their order of release. I thought of doing the Lethal Weapon films, but never got around to it until I was at the store yesterday, and found all four films in one package. Two discs, four movies for only 9.99. How cool is that?

Lethal Weapon introduces us to Los Angeles police detectives Martin Riggs and Roger Murtaugh. As the version I watched was the directors cut, it spends plenty of time with the main characters prior to them meeting. One added scene is of Riggs taking out a sniper who is shooting students at random in a school yard. I cannot imagine how that did not make the original cut.

Riggs is depressed and suicidal. He lives in a trailer on the beach. He misses his wife and has a very dramatic scene where he almost shoots himself over it. His lack of interest in living makes him a oddly effective cop. In one scene he is being held hostage by a drug dealer while surrounded by several policemen. Riggs keeps yelling for the cops to just shoot the drug dealer. When that gets him no where, he yells at the drug dealer to "Shoot me!" It so disorients him, that Riggs is able to subdue him.

Murtaugh is quite opposite from Riggs. He is happily married with three children, living in a nice neighborhood. His oldest daughter, Rianne, keeps him on his toes. Boys seem to always be around her. One scene talks of her being grounded because she was caught smoking pot in the house.

The first scene they share is rather odd. Murtaugh is taking a bath when his kids walk in. Rianne kneels by the tub. He makes no effort to cover himself. Neither act uncomfortable in the least that his penis is on display. She even playfully flicks some tub water at him. Riggs likewise has a scene with an underage girl, that gave me to pause. He picks up a prostitute who tells him she is 16 years old. He then pays her to go home with him to watch The Three Stooges. Really?

Although a girl is shown falling to her death early on in the movie, the plot takes a little while getting to the investigation. As we get to know Riggs and Murtaugh, we discover that they both served in Vietnam. It plays greatly into the plot and the mystery of her death.

Lethal Weapon has many tense scenes and great action sequences. It is however, the camaraderie between the two leads that make this film work. Watching a movie about just one of them would not work. Riggs is a depressing psycho, whose suicidal act would grow tiring as he would have to eventually put up or shut up. Murtaugh alone is a stereotypical average family man. He is only entertaining when dealing with people around him, such as Riggs or his daughter. Together they have good chemistry and are very likable. They bounce off each other well. Murtaugh constantly tells Riggs to shoot to wound, not kill. Riggs is honest enough to tell Murtaugh that his wife is not a good cook.

The one scene that does not make sense to me is the fight in Murtaugh's front yard. Riggs and Murtaugh have the bad guy, Joshua, in custody. They are backed up by several armed policemen. Instead of taking him to jail, they decide that Riggs should fight him? With a good enough lawyer, Joshua could have sued the police force for harassment and abuse. My, how the times have changed. 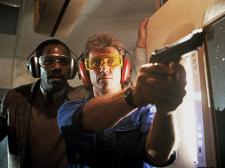 Lethal Weapon is the quintessential 1980s buddy cop movie. Gibson and Glover are great together. They share a very real and believable chemistry. While the later movies would lean too far in the comedy direction this first outing manages to balance equal amounts of drama. The scene where Riggs almost shoots himself wouldn't be equaled or even come close to in the later installments.

I couldn't agree more with you Eric about that final fight scene. If they wanted Riggs and Joshua to fight why not have Joshua somehow disarm Riggs and attack him? To just have them fight on the lawn for no real reason after they've already captured him is silly.

The other weakness the plot has is an old cliché in cop movies when the villain tips his hand by trying to kill the good guys thus revealing himself as the bad guy whereas if he'd just left them alone they never would have solved the mystery. You see this in movies all the time and it happens here. Riggs and Murtaugh have no clue who is behind the murders until they reveal themselves by kidnapping Murtaugh's daughter.

Really though, the plot is secondary to the characters. The mystery isn't very mysterious or original even, but it is a means for Riggs and Murtaugh to meet and interact. In many ways the buddy film is similar to a romantic comedy. Both genres demand that their two leads can generate that magic spark. Luckily, Gibson and Glover have it.

One thing that surprised me while watching this movie for the first time in many, many years was just how well it has aged. Although it's very much of the 1980s, it doesn't seem that dated. The soundtrack doesn't use pop music and the costumes are subdued. The most dated thing in the entire film is Gibson's hair, which is big enough to have a movie of its own. 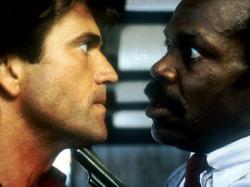 Yes the chemistry between the leads is good and some of the action scenes work but overall this movie failed to live up to its reputation for me.

Eric, the scene you liked where Riggs takes out the sniper near the beginning of the movie is completely unbelievable. This guy must have attended the storm trooper school of marksmanship as he cannot hit a man standing in the open less than 100 feet away. In the movies this act may seem cool but in real life it would lead to a dead cop.

Mel Gibson is perfectly suited for the part of Martin Riggs, even though he seems a bit young to be talking about serving in Saigon back in ’69. He brings a very authentic loose-cannon sensibility to his suicidal police sergeant. I agree that his near suicide moment is quite affecting. The look in his eyes is 100% real.

Danny Glover is likewise good as family man Roger Murtaugh. Like Gibson he is playing older than his actual age. He was 40 playing a man just turned 50. He is supposed to be the levelheaded, more mature of the two men, which makes the scene at the end all that much more ridiculous. His egging on of Riggs to kick the bad guy’s ass is completely out of character. I agree with my brothers that it is silly and makes no sense.

The scenes I most enjoyed were the ones where Riggs visits Murtaugh’s home. His interactions with Murtaugh’s family are rather endearing and bring levity to the movie. These guys are very different but share a believable camaraderie. It is the best thing the movie has going for it as the script is fairly unoriginal.

For all its flaws Lethal Weapon is an iconic cop/buddy movie from the 80s. 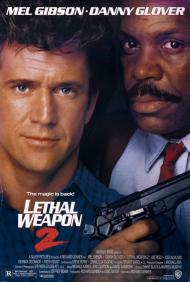 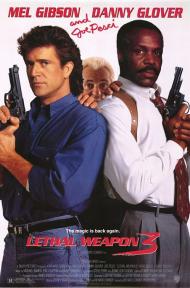 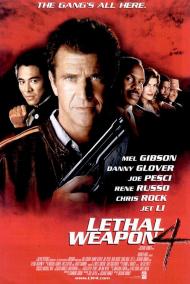