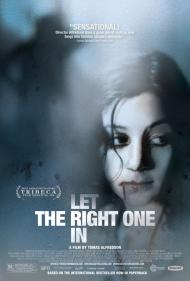 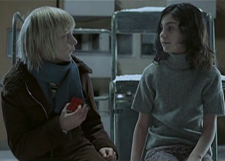 First love is tough enough without your girlfriend being a vampire.

I've always been a fan of a good vampire story but frankly they've often been a bit samey. They're either Dracula rip-offs or Anne Rice wannabes. Let the Right One In though is a fresh, original and beautifully filmed vampire story. Twilight is a vampire movie that's been getting a lot of attention lately, but those aren't vampires. They're just some sanitized fantasy of vampires. The vampire in this movie is a killer and the movie shows that in bright crimson red letters.

The plot revolves around a twelve year old boy in Sweden name Oskar. He's a quiet, lonely boy whose parents are divorced. He lives with his mother in an apartment block. One day new neighbors move in next door, including a young girl named Eli whom Oskar meets one night in the courtyard of his building. They strike up a friendship and Oskar finds himself experiencing his first crush on her. What he doesn't realize is that she is a vampire and her "father" is actually her human guardian who begins committing a series of murders to keep her supplied with blood.

Along with the vampire portion of the story, Oskar also has to come to terms with some bullies at his school. In a major way this is a coming of age story more than anything else. Oskar needs to learn to stand up for himself and to deal with young love. If that sounds heart-warming in anyway though, you'll have to trust me when I say it's not.

While I'm not always the most visual-oriented of moviegoers, I found this one to be beautifully shot. A lot of the scenes take place in the snow and are very carefully and slowly set up for maximum visual impact. There are also several bloody scenes that while not being gratuitous, also don't hold back on the gore. Don't be fooled into thinking because this stars children that this is a children's movie, because it most definitely is not. The weakest visual scene is the CGI cats that are used near the end of the story, but the scene is short and easily overlooked.

All of the visuals in the world don't make a good movie though. It's the writing and the acting that really count and young Kare Hedebrant as Oskar and Lina Leandersson as Eli do a fantastic job in the lead roles. Lina manages to convey her age, a sense of menace and an odd sort of androgyny that is beyond her years. Oskar is the less showy part and Kare plays most of the movie with little outward emotion. Together they have a great and deadly chemistry for two so young.

As a Swedish film this movie does come with subtitles, but as someone who's never minded them I found this to be no problem. If you don't like them, you can wait a year and see the American remake that is in the works. Although they might improve the CGI cat scene, I can't imagine anyone would be able to improve much else over this already excellent film.

The only real problem I had with this version of the movie is a potential spoiler, so stop now if you don't want to know. In one very short scene Oskar sees Lina naked. Earlier in the movie Lina tells Oskar that she's not a girl when he asks her to go steady. You assume that she means, she is a vampire. But when Oskar sees Lina naked the screen flashes her genitalia on the screen for a split second and you get the impression that she might have meant something more literal, because although she doesn't have a penis, she is scarred right there very badly. My problem with this is that it is never explained and in fact is flashed so briefly that you're not even sure what you saw. Doing some research on the book this movie is based on, reveals more details, but the movie never does. So my problem is, why include that scene at all if you're not going to explain it? 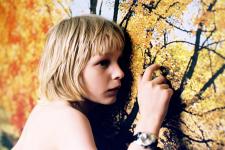 Oskar has a neighbor who is eager to show the shy boy how to take a bite out of life.

The lack of explanation was my biggest problem with this movie. Was the guy who dies and the guy whose wife dies, lovers? They hug at one point and then he takes his death hard, and then the wife gets mad at him, but it never says for sure. It shows Oskar having a great time with his father in several scenes, but then a friend comes over and drinks with his father. The scene has no dialogue, so I am not sure what that scene means. Either way it somehow signals that Oskar no longer wants to be around him.

The movie ends on a down note. Sure this is a horror movie, but a little light after so much darkness would have been refreshing. We get to know Oskar and his unhappy life. I hoped for something good to come his way. What he ends up as does not have much of a future.

The film is directed very well, and a remake will have to copy some of the scenes to remain effective. My favorite one is the massacre in the pool. Most of the killing happens off screen, but it remains an amazingly scary piece of imagery. You can tell this movie had a small budget, but it was all spent very well, except of course for those cats. 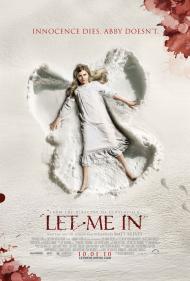