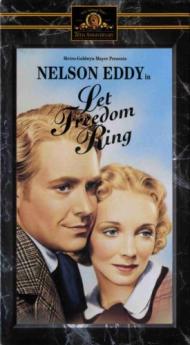 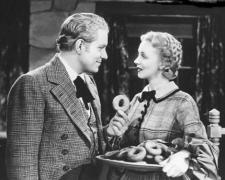 Let Freedom Ring is a nearly forgotten little gem of a movie from Hollywood’s greatest year, 1939. It is a musical western starring Nelson Eddy sans his famous partner Jeanette MacDonald. Shot in black & white this 85 minute movie packs plenty of plot and good old fashioned patriotism. Eddy sings such sentimental American standards as “Oh, Susanna”, “My Country Tis of Thee” and “When Irish Eyes Are Smiling”.

The great cast includes many well known character actors of the day, including Lionel Barrymore, Victor McLaglen, Edward Arnold, Guy Kibbee, H.B. Warner and Gabby Hayes. Set in a small town in the west shortly after the war between the states; Arnold plays a ruthless railroad baron out to steal land from honest folks like Lionel Barrymore. When Lionel’s son (Eddy) returns home from Harvard everyone assumes he will lead the fight against Arnold. Eddy pretends to take Arnold’s side but in reality uses the local newspaper to fight against him. All of which leads, after a few twists, turns and fistfights, to a joyous and heartfelt conclusion that will leave you proud to be an American.

This movie is perfect viewing for Independence Day. This Ben Hecht screenplay may seem corny to the jaded but for anyone with an ounce of homespun pride, Let Freedom Ring is rousing entertainment indeed.