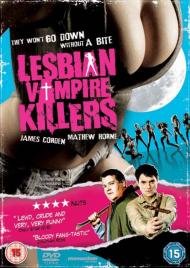 Lesbian Vampire Killers (that's killers of lesbian vampires, not lesbians who kill vampires) is apparently supposed to be a spoof of the old Hammer Horror films, but comes off more as a bad rip-off of Shaun of the Dead, with vampires instead of zombies. But where in Shaun, Director Edgar Wright and stars Simon Pegg and Nick Frost created something funny and engaging, the makers of this film tend to go for the lowest form of humor without even pushing the envelope in that direction. And with a title like that you would at least expect some form of titillation, but these lesbian vampires, apart from a very brief scene at the opening of the film, are most definitely rated PG.

Mathew Horne and James Corden, stars of British sitcom Gavin & Stacey, play best friends Jimmy and Fletch. Jimmy is the mostly normal, skinny one whose girlfriend just broke up with him. Fletch is the overweight one with a habit of saying inappropriate things. To help Jimmy get over being dumped the two of them go on a hiking holiday where they end up in a small English village that has an ancient curse upon it. The curse causes every girl in the village to become a lesbian vampire upon their 18th birthday. (Don't try to reason that out or ask stupid questions like where do new villagers come from then, or why doesn't everyone just move a couple of miles to the east, or your brain will start to hurt.) It turns out that Jimmy is the descendant of the knight who did battle with a lesbian vampire centuries ago, but before she died, she laid the curse.

Don't get me wrong, I've laughed at crasser humor than this before and sure, I'll admit that I chuckled a few times even here, but the whole script just reeks of laziness. There's nothing clever anywhere in this story.

Horne and Corden have proven that they can be funny in smarter material than this and they do possess a certain comic chemistry together with their classic Horne as the straight-man to Corden's clown. It's just too bad that they're not given much to work with. The rest of the cast, apart from Paul McGann's small part as the vicar, is made up of attractive young women who obviously weren't hired so much for their acting skills as they were for their cup size (which if we'd gotten to see more of might have made up for having to watch the rest of it).

Perhaps the best part about this movie is that it clocks in at around an hour and twenty minutes. Sure, that's about an hour too long, but still short enough that you won't feel as though you've wasted too much time watching it.

I agree with Scott that although Lesbian Vampire Killers is not that great of a film, it contains some light hearted sexy fun. Considering the title of this farce, of course we are not intended to ask stupid questions. Two likable best friends find themselves caught in a small town full of hot lesbian vampires. What else is there to say?

Sure this could have been funnier, but if you just go with it, there is some entertainment to be had here. Matthew Horne and James Corden are a good comedic team playing cinematic clichés. Horne acts the lovelorn dweeb who must grow a pair before the film ends while Corden is the buffoon who eventually comes through. Scott comparing them to a lesser Pegg and Frost is fitting as these roles seem to emulate them. The actors, however, are not this film's only problem.

The writing is adequate. Such lines as, “Good luck Fletch, let’s try to come out of this alive.” Could have been delivered better had Phil Claydon been able to better elicit some comic delivery from his actors. At the end of the film, Horne asks of the town’s attractive young girls, “They're not vampires anymore?” to which Comden adds, “Are they still lesbians?” Again, in better hands, such as Pegg’s and Frost’s, such lines may have been funnier.

There was some potential here for great things. The ending sets up a sequel that is not likely to ever happen but it does contain one of the funniest bits. Earlier in the film an exasperated Corden states, “Next time he'll (God) have me bummed by a big gay werewolf I swear.” The movie ends with the image of a limp wristed howling werewolf.

If you can watch this with the mental capacity of a 13 year old boy, you may find plenty of things to laugh at. I would have loved this film if I saw it when I was in junior high school. For anyone older, stick to Shaun of the Dead.