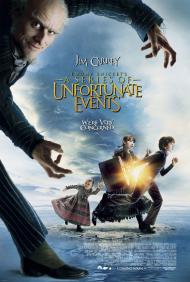 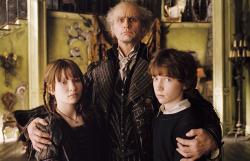 Lemony Snicket's: A Series of Unfortunate Events is as muddled as it's title. There is some excitement and thrills for the 9 to 12 years olds, but if you are unfamiliar with the books, you may find yourself going, "huh?", through out the movie.

Three orphans (yes that extremely tired plot device) go to live with their eccentric uncle, Count Olaf, who despises them and only wants them around so he can become their legal guardian and then kill them, or as Count Olaf says; "All that I ask is that you do every little thing that pops into my head, while I enjoy the enormous fortune your parents left behind." For a kid's movie it is a bit dark, but nothing gruesome ever really happens, although several murders occur throughout the film.

The movie is actually the first three books in the series. The first book is split into two parts to bookend the movie. My fifth grade son was great help in explaining what it was in fact that I was watching. He pointed out to me that, in the book, the oldest orphan, Violet, gets out of the marriage to Olaf by signing the license with her left hand. He was shocked to see in the movie that Olaf is also aware of this trick and reminds Violet to use her right hand. It definitely helps to be familiar with the books, my son enjoyed this movie far more than I.

Jim Carrey is the best thing about this movie. He has the best lines, "I will raise these children as if the were actually wanted." He says with fake sincerity when the orphans first arrive at his home. Olaf is an actor, so Carrey gets to ham it up as Olaf plays other characters in several scenes.

After barely escaping from being hit by a train, the children are put into the care of other distant relatives. Olaf, however, is never far behind as he continues to try to get the children and their dead parent's fortune. While with a snake loving uncle and then a paranoid aunt, the children learn sparse details of their parent's secret life and of a secret organization, all of their relatives seem to be members of. Nothing is explained in detail and it all seems to be worthless information.

A Series of Unfortunate Events is a modern day Chitty Chitty Bang Bang. It is occasionally dark; it sometimes makes little sense and is way too long. Emily Browning in Lemony Snicket's A Series of Unfortunate Events.

I agree with Eric that this movie is too long, but I disagree that Jim Carrey is the best thing it has going for it. If anything, there is too much of him and way too much of his hammy acting, which for this movie should have been toned down. In fact, this movie should have been called Count Olaf's Series of Unfortunate Events, since he hogs the screen and shoves the children, who are purportedly the protagonists of the film, to the sidelines.

As for the darkness of the story, this movie doesn't go far enough. Repeatedly, the narrator warns us that dark things are going to happen and if we want to, we should leave now. While occasionally, dark things do happen, it's impossible to get upset or worried about them. The movie opens with the death of the children's parents and yet the kids take it all in stride, never shedding a single tear for the deceased. Apart from one scene when Olaf actually slaps Klaus, the Count completely fails to be intimidating and I was left totally baffled why the children kept failing to outwit him. Surely, together the three of them could have devised a way to stop the Count, or simply figured out how to escape from him.

Like Eric, I to kept waiting for the payoff to come that would reveal the secret organization to which the orphan's dead parents and their transitory guardians were members, but despite repeated build-up, an explanation is never forthcoming. Perhaps that information is being held for the inevitable sequel that is surely to follow.

If nothing else, the movie is beautiful to watch. The sets, costumes and art direction are superbly done and together they create a unique visual world. If only the plot lived up to the scenery.