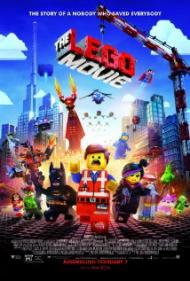 Emmet (voiced by Chris Pratt) and Batman (Will Arnett) in The Lego Movie.

Although it often feels like an amalgam of other movies, animated and live-action, The Lego Movie is surprisingly entertaining. What might have been a feature length commercial is instead a fast-paced comedy with jokes for the kids and their parents. It even manages to squeeze in a little bit of heart.

The plot is sort of like Toy Story meets The Matrix. Emmet (Chris Pratt) is a generic construction worker living in Bricksburg, a city-and world-made of Legos. He follows the rules and does nothing to stand out as befits a good citizen. All that changes when he finds "The Piece of Resistance" below the construction site where he works. With this discovery he seems to have fulfilled a prophecy marking him as the Special One who will defeat President Business (Will Ferrell), the dictator of Bricksburg, who demands that everyone follow his rules.

Emmet, in way over his head, is soon on an adventure with a group of misfit characters on a quest to become a master builder and bring freedom to his world. He's accompanied, among others, by Wildstyle (Elizabeth Banks), a Trinity type character who he develops a crush on, and Vitruvius(Morgan Freeman) who acts as his mentor. Chasing them are Bad Cop (Liam Neeson) and President Business.

A great deal of fun is had with the different famous characters from various franchises that have been given the Lego treatment. Lego Batman (Will Arnett) plays a big part of the story and various other superheroes, like Superman, Wonder Woman and Green Lantern, make cameo appearances. A Lego Millennium Falcon shows up with several Star Wars characters aboard, including C3-PO voiced by Anthony Daniels and Lando Calrisian voiced by Billy-Dee Williams. Other famous "faces" making an appearance include Dumbledore from Harry Potter, Gandalf from The Lord of the Rings, and even Shaquille O'Neal.

Emmet's journey takes him through various Lego playsets, including the Old West and Cloud Cuckooland. Although the animation is a combination of stop-motion and CGI, everything is designed to look as though it were really constructed of Lego pieces, including the water. It gives the film an original look and would require repeat viewings to see all of the details the animators have crammed into every frame.

Along with the action in the Lego world, a portion of the story is set in the real world which gives the story its heart and a surreal tinge. The citizens of Legoland refer to an omnipotent being as the man upstairs, represented by a human hand.This really only comes into play in the film's final act, but it adds an extra layer to the story.

With plenty of eye-candy, zippy pacing, plenty of jokes and one of the most annoyingly catchy theme songs to come around in a long time, The Lego Movie is an entertaining cartoon for the whole family. Given its opening weekend success, it's hardly surprising that they're already working on a sequel.

Superman and Green Lantern greet Emmet in The Lego Movie

The Lego Movie is one of the most original animated theatrical films to come along in a while, if we are simply talking about the animation. As it is all about Lego interlocking building blocks, it looks nothing like any other animated film. As Scott wrote, even the water, smoke and clouds are made of Lego pieces.

As far as the story goes, The Lego Movie takes on quite a lot of subjects. It starts as a story about loneliness. Emmet wants to fit in by acting like how he has been told to act but it is to no avail. The story contains some political analogies but it does not take one side. Conservative/libertarians may see a message about the freedom of the individual while a liberal/communist may see the equality in the masses working together.

It definitely has a freedom versus control theme. We are shown how mass media/entertainment can limit our uniqueness. The Lego Movie ultimately demonstrates the value of original thought and creativity. Emmett struggles to build unique objects as he has always followed the instructions.

No matter how you see any of the themes, they all lead to a greater understanding near the end of the film with the spoiler scenes Scott so carelessly let out of the bag. The film gives some hints along the way about where it is leading to but it should be experienced by the viewer. It brings everything home and puts it all into perspective.

Chris Pratt plays the most likable, however bland, character on Parks and Recreation. That same charm translates through his voice as Emmet, the construction worker who just wants to be a part of a group but discovers he is intended to stand out. Emmet is at first likable yet forgettable. Over the course of the story he learns that greatness never comes from following directions given by someone else.

Like Scott, I enjoyed the cameo appearances. My son laughed at the relationship between Superman and Green Lantern. “I super hate you.” They only have a few scenes but they work. Many of the voice actors possibly did all of their voice work in a single afternoon. Batman gets the most screen time of any guest star. Will Arnett hams it up with a joyous pseudo Christian Bale imitation.  “I only work in black and sometimes very, very dark gray.”

The Lego Movie works on many levels and it is far more deserving of an Academy Award for best Animated Feature than any film nominated this year. 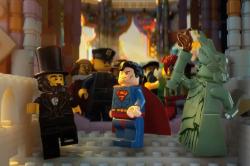 A motley assortment of characters in The Lego Movie.

The idea of a movie based on LEGO toys sounds as if Hollywood has finally reached the bottom of the nostalgia barrel (but of course that's just wishful thinking – and I'm still waiting for the Gilligan's Island movie). Actually the result is one of the most clever and creative animated features to come along in quite some time. I'm no fan of the genre, but I thoroughly enjoyed this movie. It's a family movie that contains enough of an adult perspective to keep the grownups entertained, and it's also one of the flat out funniest animated movies in recent memory.

The plot is a wonderful amalgamation of childhood pretending. As Eric said, it has a clear message about nonconformity and, more importantly, the power of the imagination. At the beginning of the picture Emmet Brickowoski has none. He can only function by following instructions written by others. Through his various adventures Emmet learns to think for himself. Of course it turns out that, like Dorothy's friends from the Yellow Brick Road, he really possessed this quality all along. His one previous original idea, a double-decker couch, ends up saving him and his friends during an emergency at sea.

The plot twist that Scott alluded to, and Eric criticized him for, is not really that big a deal. It does add a nice layer to the story but knowing about it beforehand doesn't hurt the viewing experience. It's not like it's some huge surprise or anything. The movie provides several clues and hints along the way. They mention the Man Upstairs for example, and the way the characters move between the different LEGO worlds is dream like, or more precisely, daydream like.

The various superheroes and sundry others provide much of the humor, especially the jokes aimed at adults. At one point Batman tells Lucy, "If this relationship is going to work out between us I need to feel free to party with a bunch of strangers whenever I feel like it. I will text you." The inclusion of so many beloved characters was a masterstroke. It definitely owes a debt to Toy Story, although it never approaches that movie for pure heartfelt emotion.

Hollywood being Hollywood, a sequel to The Lego Movie is already in the works. History tells us it will be an inferior pastiche of the first movie. But then as long as audiences will line up to see them, Hollywood will continue to milk the same material dry. As enjoyable as this movie is, I would much rather see it stand alone as a future classic than be the first in a series of steadily worsening sequels.