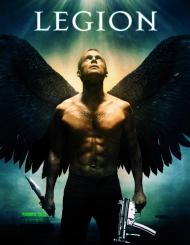 Paul Bettany is the Arch Angel Michael in Legion.

When a plot involves an angel mowing possessed people down with a machine gun while he protects a woman whose baby will somehow save the world, that movie better be so good that you are too caught up in it to think about logic or plot holes or it better be so bad that you enjoy it for its cheesy goodness. Sadly, Legion is neither good enough or bad enough to make it worth watching.

For an unspecified reason God has become upset with humanity and decided to wipe it out again. Obviously this is God in Old Testament, fire and brimstone mode because all that mamby-pampy Christianity is nowhere in sight. Instead of sending a flood this time though, God is feeling particularly blood-thirsty because he instead wants to send legions of Angels to wipe out humanity. The Arch-Angel Michael (Bettany) takes exception to God's plan and decides to try and stop him.

It's a good thing for humanity then that God has left a loophole in his plan. In a desert diner on a forgotten highway, a waitress is pregnant with a baby that has the power to save everyone. Just how and why are two questions this movie would rather you didn't ask. Suffice to say that if Michael can save this baby then somehow humanity will be safe.

Clearly what little budget this movie had went on the digital effects and to paying a very much slumming it Dennis Quaid's salary and not on locations or sets because (apart from one short scene at the beginning) the entire movie takes place at the diner.

To be honest I had little expectation going in to this, but I'd hoped that it would have enough action and eye-candy that I would enjoy it visually anyway. Sadly, there's a lot less action then you might expect. Far, far too much of the movie involves two or more of the inhabitants of the diner gathering off in a corner and having a melodramatic conversation. Just occasionally does it remember to throw in an action scene or two.

In several ways the story reminded me of The Terminator. Only instead of Reese going back in time to protect the mother of mankind's savior, this time it's an angel and the Terminator is another angel; Gabriel, and he doesn't show up until the last 15 minutes. So imagine a remake of The Terminator without the Terminator in most of it, where Sarah Conner never leaves the diner where she works, where how her son will save humanity is never explained, without any kind of romantic relationship and without as much action and you almost have this movie. Sounds good right?

I could talk about the illogical plot holes and how none of what happens makes very much sense, but it seems beside the point. I mean, the fact that God would have trouble killing a baby if he decided to kill a baby or the ludicrous idea that he would be constrained by some obscure rule about the baby being born isn't as important as the fact that the dialogue is bad, the acting not-so-good and the action too brief.

One thing that always occurs to me when I watch a movie like this is, do the filmmakers know how bad their movie is or did they actually watch it and think, "Damn that's good!"? It would take the faith of an Angel to believe that about this one. 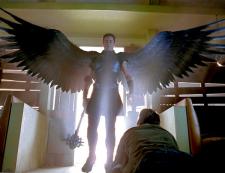 Gabriel makes an entrance in Legion.

Soon after I started watching Legion with my 16 year old son, it became clear that Scott was correct. Not only is the plot unoriginal, but it contains Hollywood’s worst stereotypes.

After we were introduced to all the characters at the diner, I told my son that Jon Tenney would be the first to die as he is a rich, white male. In liberal Hollywood terms he has never suffered, and thus he will die horribly. I was right. My son then tested my theory by asking if that meant the black guys would live. I answered that they may live, but if they do die, they will die heroically, by virtue of having already suffered. One is missing a hand and the other has problems with his ex. My son asked about the father and son‘s chances of survival. I answered that the dad served no integral role in the story, so his number is obviously up. That means his son will live as compensation for his death. That was confirmed when Michael tells him that, “… you are the reason I still have faith.”

As most of my predictions came true, my son then asked why God wanted a baby killed. No God of any religion would, I explained, but since this is a Hollywood movie, it is the Christian God who wants to destroy humanity and an innocent unborn. Hollywood does not have the balls to show even a picture of Mohamed, but like a rich white male, the Christian God is always available for Hollywood to insult. In this case, the bad guy in the film is in fact God.

The one and only enjoyable scene is when Gabriel shows up. He is a warrior with amazing powers. His wings allow him to fly, deflect bullets and act as swords, cutting people when he spins. His wings make him extraordinarily formidable. His fight scene with Michael is the films best moment.

It raises one of many questions. Why did Michael cut his wings off as soon as he came to Earth? Why did God wait until her third trimester before having her killed? Why possess people and send them on a journey, when a well placed lightning bolt could have done the deed?

With a rewrite, Legion could have been a decent movie. Instead of God, why not just make Satan after the baby, and Michael sent to protect it. This film could have been exciting watching him fight with his wings, as a super hero for God. An audience would sooner get behind that concept than this Anti-Christian mess. If Satan is real, he must live in Burbank, California.